After a string of overcast and cloudy sunrises, I was recently treated to relatively clear skies when I made my way to my favourite unspoilt beach east of North Berwick. It was relatively low tide, and the tide was going out even more, which would reveal great rock formations which would otherwise be concealed. The wind was, as often the case here on the Scottish east coast, quite strong with even more powerful gusts. Therefore I was a little concerned that many photographs would not be as sharp as I’d have wanted due to the resulting tripod vibrations. I decided to use the big Gitzo 2220 explorer instead of my carbon fiber Velbon Sherpa 540 to minimize the risks of camera and tripod shake. Luckily most of the photographs, including most of the very long exposures turned out as sharp as hoped for.

When I got down to the beach, roughly 30 minutes before sunrise, the colours were already beautiful. Nothing like the cloudy blue light I have been blogging about recently. In this first photograph you can admire the interplay between warm and cool hues. In the distance you can see the marker on the rocky outcrop named St Baldred’s boat. 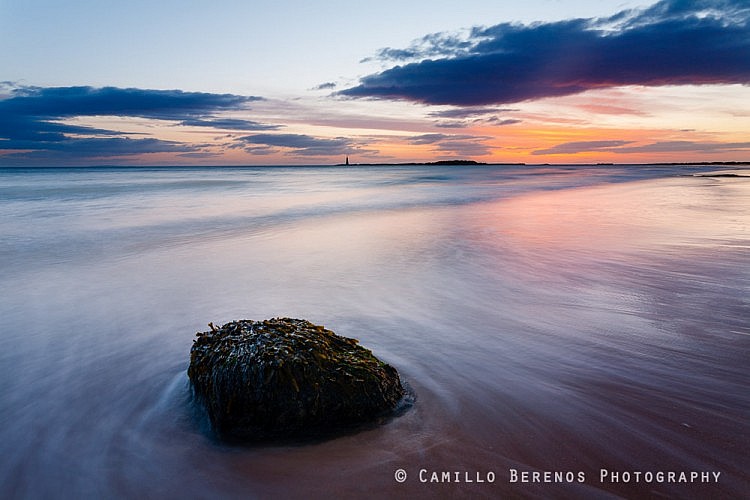 From this position it would be very hard to get a more interesting foreground AND the rising sun in one frame, so I walked to the rockier bit of the beach. Actually, I had to run as I spent too long faffing around at this location, without getting any more really good shots anyway, as I had exhausted all the compositional options. I was a litte late to photograph the exact sunrise, but nevertheless I like the warm golden light here. 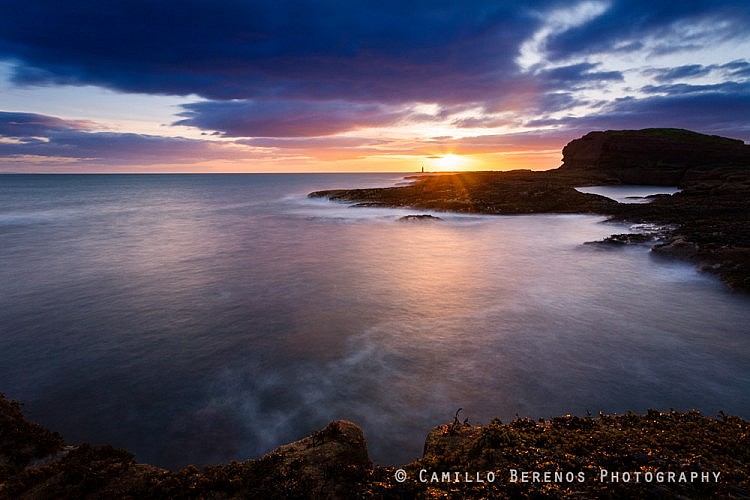 And, of course, I took a long exposure version using the same composition. And as always, I have a hard time deciding which one I like most…

And last I decided that I could not go home without at least one shot featuring the Bass Rock. This meant turning 90 degrees away from the rising sun, but actually the light was beautiful, being very soft and warm.

Sunrise over the Bass Rock

Overall, I got four shots I’m not displeased with out of this trip, which is not bad. But I realise that I’m incapable of deciding between long and short exposure versions of the same shot. Does anyone else suffer from this inability?