In the world of literature it has since long been accepted that there are only a limited number of basic plots, and that all stories, no matter how captivating, and perhaps even novel they may appear, are merely variations and reinterpretations of these core plots. No doubt, the same must be true in other art forms. And when looking at portfolios of individual artists, there are often only a handful  recurring dominant themes.

One of the themes, or clichés, which seems to increasingly find its way to my portfolio, is the “stones in sea with medium long exposure such that wave movement folds around the stones”theme. While on holiday on the Isle of Lewis in the Outer Hebrides, I managed to add a couple more to my collection. Both were taken on the same beach, Dail Mor, on the west coast of the Isle of Lewis. This is a fantastic beach to do photography, as it’s got some great cliffs and sea stacks on either side, and some fantastic waves (apparently it’s  a known surf spot). Though the photographs below were taken on different days, on both occasions conditions were quite good for black and white photography. There was a good swell and the light was moody despite the thick cloud cover, as in both cases it was approaching sunset. As the colours were not very impressive, the conditions and textures screamed black and white conversion to me. 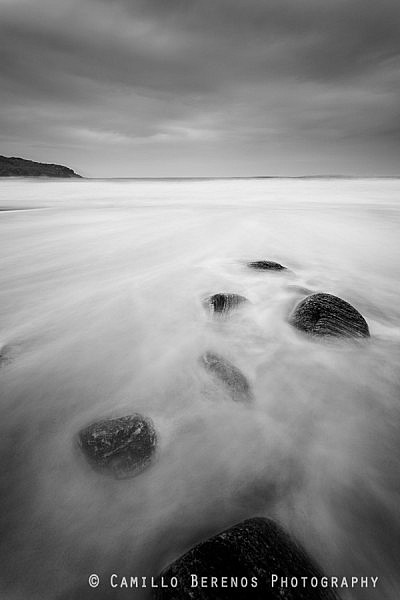 Long exposure black and white seascape on Lewis and Harris

In this second photograph, the swell was even more powerful, and I opted for a faster shutter speed to capture the brute force of the waves. Good thing I was wearing wellies though! Probably one of the most useful non-photographic pieces of equipment to take with you when shooting seascapes. I have not made up my mind as to which one I prefer. 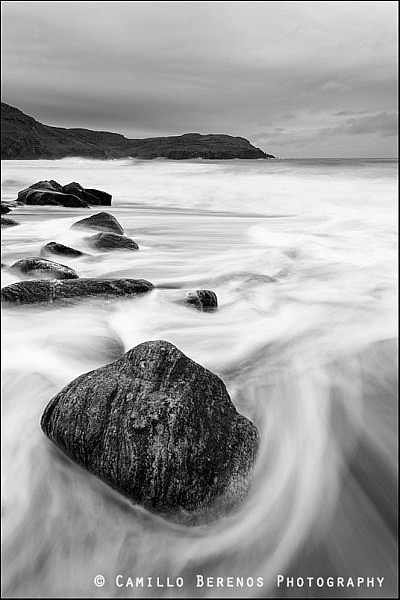 Strong waves at high tide on the beach of Dal Mor, the Isle of Lewis in the Outer Hebrides

Do you have themes which you revisit time after time? I’m curious to hear your thoughts.