The shipwreck at Longniddry beach is one of those iconic locations on the East Lothian coast which has haunted me for quite some time. I have been there on a number of occasions with the intention of getting the shipwreck partly submerged during the golden hour. However, most of the time I either timed my arrival poorly, or the weather forecast let me down.

A couple of months ago I gave up, and decided to shoot despite the tide being way lower than I initially wanted. The results were not displeasing, but there were a couple of things I’d like to see differently if I’d give it another shot.

First, the tide really needed to be higher. Much higher! When shooting when the tide is going out, which is likely preferable to the tide coming in, this means that conditions are only decent for 15 minutes or so.  Second, I wanted to have a surreal and mystical look to it. I was thinking along the lines of black and white, with overcast or thick cloud cover and a bit of fog. The fog would conceal the distant shores of Fife, across the Fifth of Forth, which would otherwise lead to distractions along the horizon.

A couple of weeks ago, when it was overcast and even drizzling, I decided to give the Longniddry shipwreck a go, after stopping at Portobello beach. I timed my arrival at the shipwreck reasonably well, as I had to wait only 30 minutes or so before enough of the wreck became visible for what I had in mind. Within 15 minutes or so, I took a couple of photographs, of which I like the following two pictures the most. 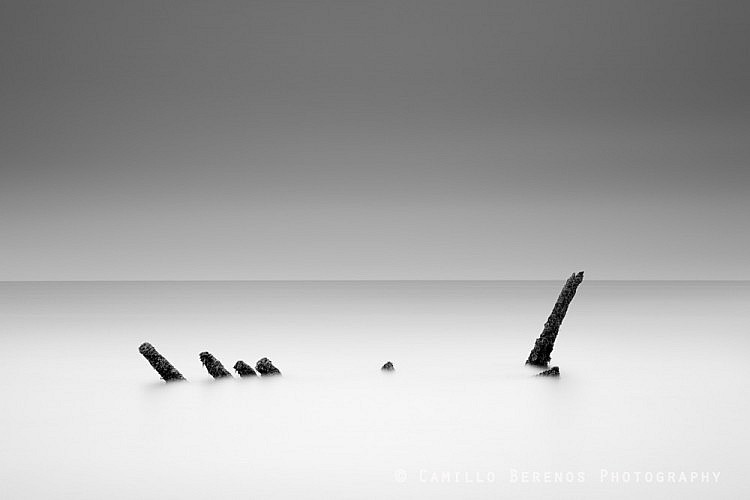 The Longniddry shipwreck as the tide is going out.

The famous Longniddry shipwreck on a drizzly overcast morning is an almost surreal subject.

Does this mean I can now tick the shipwreck off my list, never to pay it another visit? I don’t think so! I am only scratching the surface of compositional possibilities the wreck has to offer, and I believe that I have barely got to know her. We still have unfinished business. Au revoir, le shipwreck!