According to conventional wisdom photographers should always aim to only select and present one version of a certain composition: the selected one presumably being the one that the artist deems the superior take. And in general I agree. If a portfolio consists of too many highly similar incarnations of a similar scene, this will get stale quickly. It may also let viewers, rightly or wrongly, believe that the photographer could not make up his mind, and has not yet mastered the art of ruthlessly culling inferior versions.

In pop music, (apologies for introducing this musical digression, but I am a keen guitarist) and exponentially more so in Jazz, it seems much more accepted for artists to record alternate takes of the same song. Granted, they rarely end up on the same record, and are often only found on B-sides, live recordings or compilation albums, but I always enjoy hearing artists exploring different directions within the margins of what makes the song recognizable.

Two photographs can, despite an identical composition, convey completely different moods. This difference can be achieved by differences which are largely out of the photographer’s control: changing light, appearance and disappearance of rainbows, changing tide. But the photographer can also make a conscious decision to use a different shutter speed, or use different post-processing techniques which can dramatically alter the look and impact of a photograph.

Below are two recent seascapes taken on the East Lothian coast in Scotland. Both were taken around sunrise, but conditions were way too cloudy for the sunrise to be colourful. In fact, the sun wasn’t even seen. In a way it would have been nice to be rewarded by some spectacularly colourful displays for getting up before 4AM, but I am starting to like the soft blueish light of cloudy sunrises more and more.

The first photograph was taken with a shutter speed of 3.2s, which I thought would be just long enough to blur the currents while still maintaining some definition and texture in the waves. Of course, there is some waiting needed for the waves to actually hit the rocks the way I wanted, and then a few alternate takes to later select the photograph with the blurred sea I like the most. I don’t advocate the paparazzi approach of mindlessly shooting, but in instances such as these, it is extremely hard to envisage how the blurred water is going to look when pressing the shutter.

I think I only took two photographs of which I liked the one below the most. Here I really liked how the blue tones worked together with the white water created by the strong current around the razor-like rocks. Also, the short exposure retained definition in the ominous and dramatic clouds. 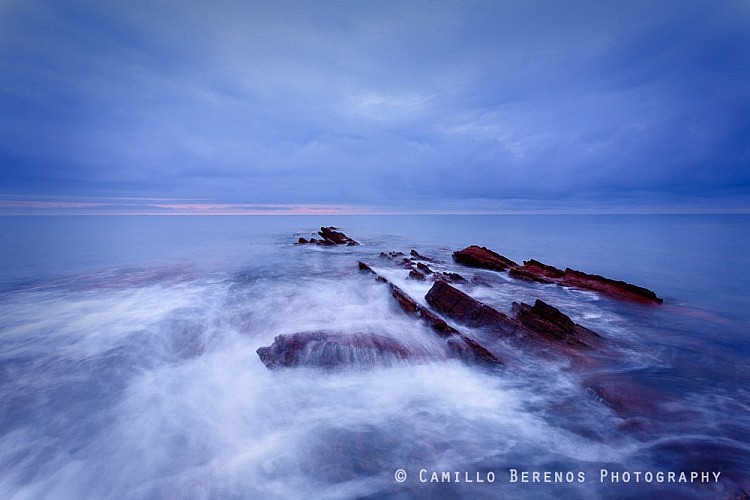 The second photograph was taken with my 6 stops ND filter to achieve an exposure of over 2 minutes. The smoother, silkier water in combination with the blurred clouds made this a great candidate for a black and white conversion. While it is not exactly a minimalist photograph, it is definitely much more bare bones that the first one, as both sea and clouds are much blurred. In combination with the monochromatic tones, the feel and mood is completely different from the first image. 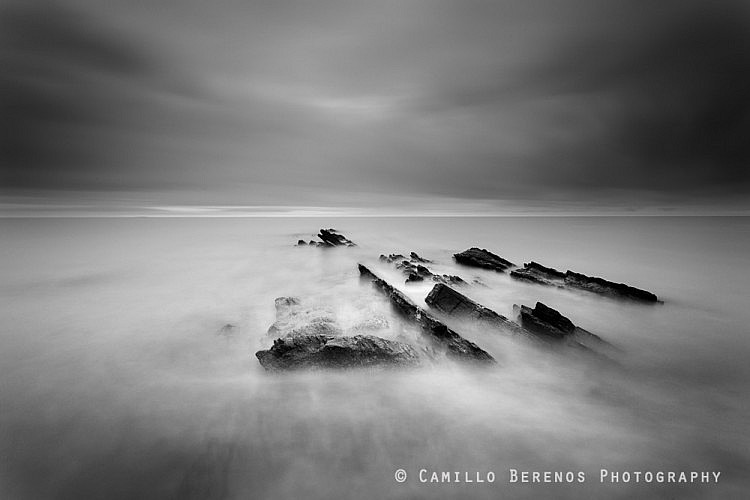 So, even though the composition of both shots was completely identical, the resulting images are completely different, and in some ways complementary. Luckily, it is a very rare thing that photographs work well both as a colour photograph and as a monochromatic shot, otherwise my portfolio would be twice as large, and I would also be accused of not being able to separate the wheat from the chaff.