Coigach, Inverpolly and Assynt are probably among the most scenic regions in the Scottish highlands if you ask me. The hills are not very high, but are nonetheless very prominent. They tower high above the surrounding moorlands and bogs, and are beautifully shaped. The ridges and summits of Cul Mor, Suilven and Stac Pollaidh are fascinating and very recognizable from all angles. The elements and movement of glaciers during the Ice Age have shaped the Torridonian sandstone of which they consist, creating very interesting rock formations on many of the summits.

I have been to the region on a number of occasions, and have walked many of the hills before. I thoroughly enjoyed every single one of them, but I’ve never come home with photographs which do justice to the fantastic scenery. I’ve even been on some of the hills in fantastic evening light, including Ben More Coigach, Ben More Assynt and Conival, but I was in the company of non-photographing friends. It’s something all keen photographers will understand, and it’s painful not to be able to take photographic advantage of such situations, but that’s the way it is. 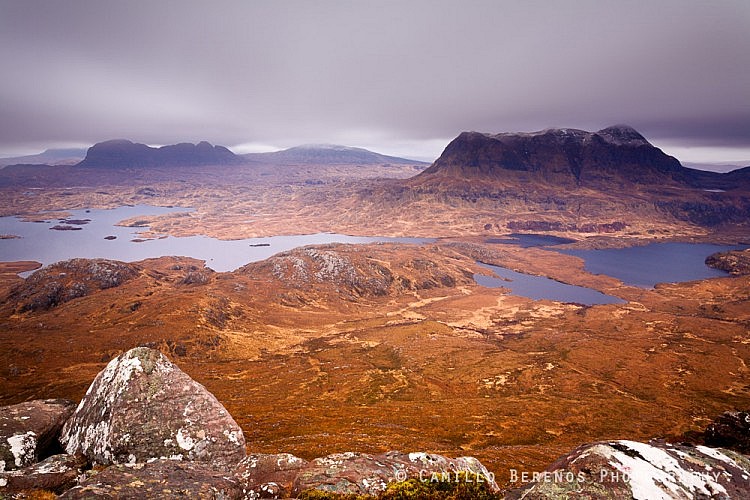 From a previous trip: View from the summit of Stac Pollaidh, overlooking the majestic hills Cul Mor and Suilven in the Assynt region in northern Scotland.

Spending time in the hills is nice full stop, even if photography is not the main objective. But since the arrival of our daughter, time is really precious, so I should really make the most of my visits to the Scottish Highlands. Hence I decided that I should prioritise photography a little more. This means that (solo) wild camping will be my preferred way of hillwalking in Scotland. This is the only way to get a chance to shoot from the summits or ridges in the best light.

Sgorr Tuath is one of the hills which I haven’t yet climbed, and was my choice for my next overnight walking trip. As it’s south of Stac Pollaidh and many of the other great Assynt hills, the views should be spectacular, and even better than those from Ben More Coigach.  It’s not a very high hill, and one of the least popular ones in the region. It was even impossible to find route descriptions on the internet. As there are no paths or trails leading to this peak anyway, frankly a map and compass is all that’s needed. The lack of paths is something that made me curse on a few occasions, as the terrain was extremely boggy. Walking through meter high bracken and heather over very slippery boggy soils wore me down. In addition, there were countless holes on the hill, all filled with water, and care had to be taken not to disappear in them. Many of them were concealed by bracken or heather, so I did not manage to keep my feet dry. I’m puzzled by why the landowners have dug these holes other than scaring hillwalkers off.

Soon after arriving at the summit low hanging clouds concealed the views for a couple of hours. This was perfect, as sunset was still more than three hours away. I set up the tent, cooked some great tasting noodles and lied down to give my legs a break from the walk up. Of course one is never sure if the clouds will disappear eventually, so I was a little bit anxious about that. I used this downtime as an opportunity to scout the summit for interesting foregrounds and potential compositions for if the views improved.

In the section below you can find a photographic report in chronological order.

And indeed, a little more than an hour before sunset, the clouds lifted enough to get some decent views. The light was still a little bit flat, but I liked the soft diffuse light.  Here I used some of the pinnacles to create V shaped lead in and framing Stac Pollaidh on the other side of Loch Lurgainn. In a way the V shape loosely mirrors the conical shape of Stac Pollaidh, though this was not a conscious decision. 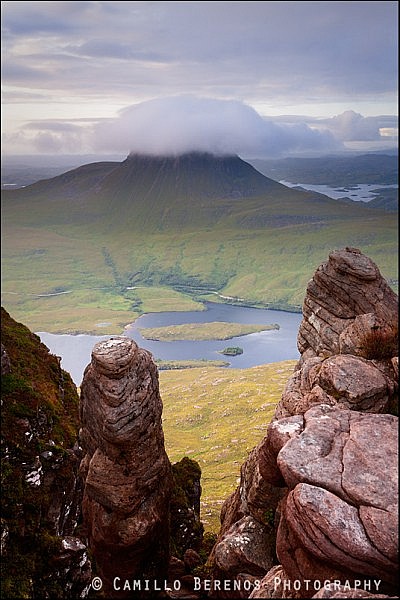 The summit of Stac Pollaidh obscured by a persistent cloud

Next I wanted to capture three of the most iconic hills in the Assynt area, from left to right: Stac Pollaidh, Suilven and Cul Mor. I have ascended all but Suilven, which is still mightily high on my wish list. The sun made quite an effort to shine through the clouds, subtly illuminating the slopes of Stac Pollaidh, but with a most dramatic effect on Cul Mor. It’s just a fantastic landscape to take in, with all the lochs sandwiched between the peaks. 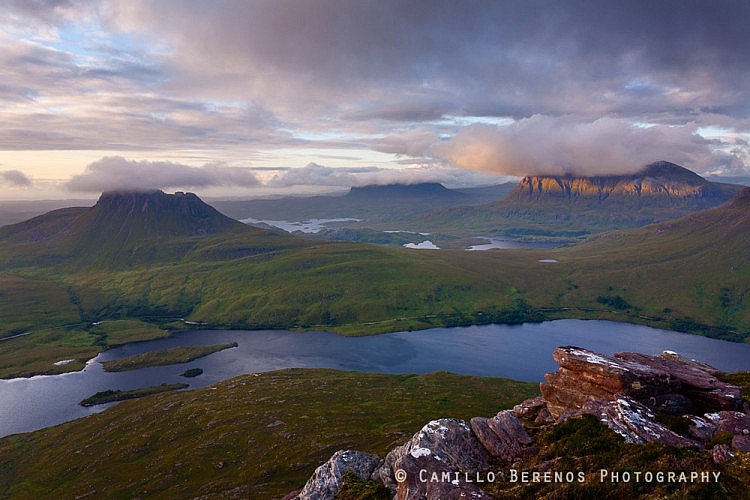 This one is compositionally a bit similar to the first photograph, but I here used a wider angle to include Suilven in the frame as well. There is definitely no lack of great rocks on Sgorr Tuath to serve as foreground interest. The colours in the sky started to intensify as the sun was getting closer to the horizon. 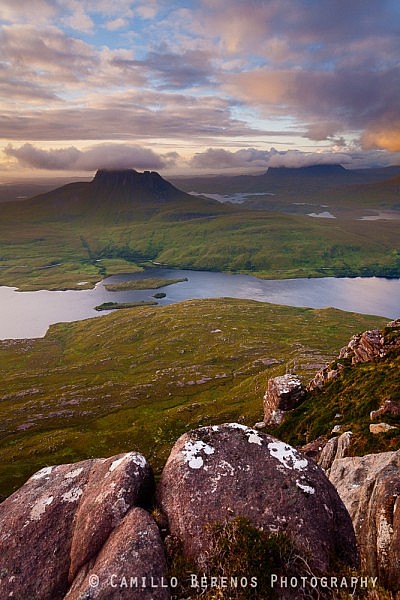 This is the composition of compositions. It can definitely be classified as low hanging fruit, as this is the view that awaits you when getting onto the col of Sgorr Tuath. Joe Cornish, the master of UK landscape photography, has a well-known photograph with a similar composition, though I did not actively tried to recreate it. These rock formations are just so impressive that a shot with them in the foreground would almost not need the great hills in the distance as backdrop. I hace tried several variations on this composition, but this one worked best. As the largest pillar falls between Suilven and Cul Mor it does not conceal the background too much. The low angle of the sun was really creating some great directional but diffuse light on the rock formations, and the clouds were lit in a dramatic way. 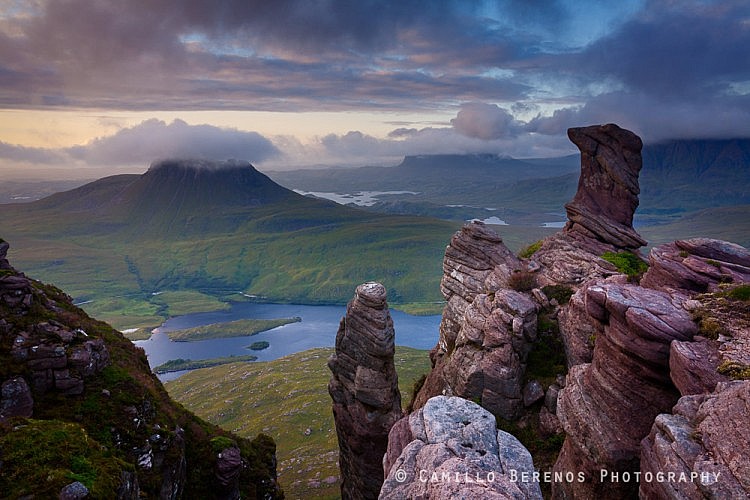 The sun would set quite far to the left of the most interesting compositions, but it would be criminal not to try out some compositions with the sun in-frame. I moved up to the eastern summit of Sgorr Tuath, where fantastic views over Loch Lurgainn, Loch Bad a’ Ghaill, Stac Pollaidh and the sea were to be had. Sunset was still quite some time ahead, but the light was definitely very dramatic. The cloud over Stac Pollaidh’s summit was not going anywhere and stayed put during the entire time. It would have been nice to have some photographs with clear summits, but this does represent the typical Scottish conditions a bit better anyway. As you can see on the left, the low hanging clouds were moving fast, and only seconds later all views were gone. 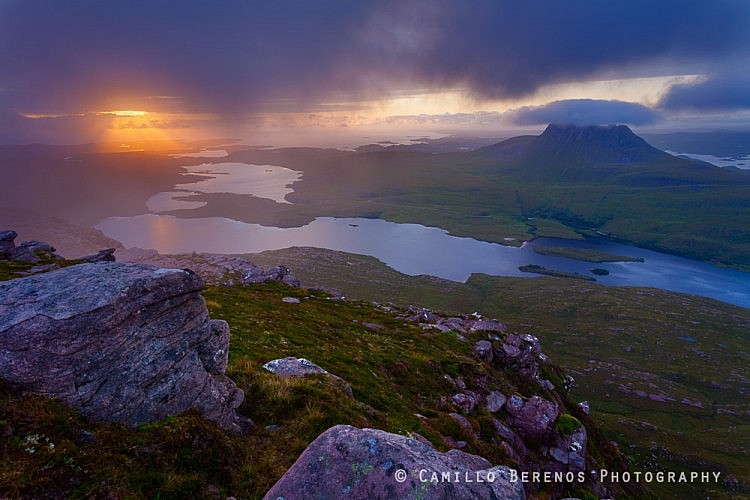 While the grand vista of the rock formations and the Assynt hills using an ultra-wide angle is nice, I tried to compose some more intimate and less cliche pictures. Here I was on the long end of my 17-40L to isolate one of the largest rock pillars and Stac Pollaidh. 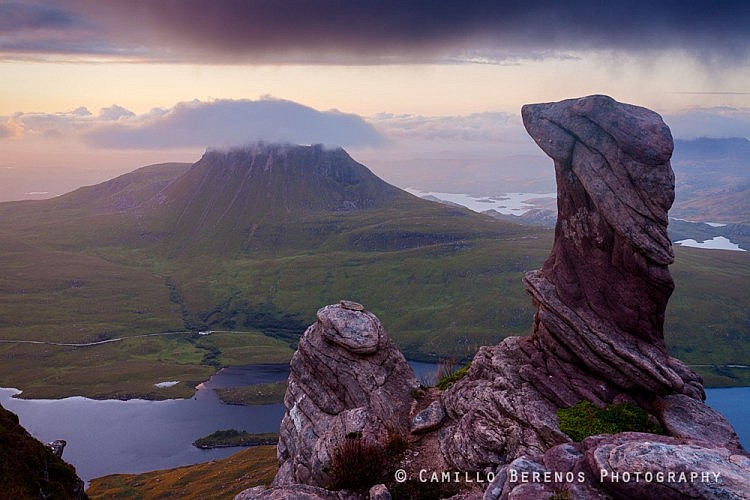 The primordial landscape of Assynt.

Now the light was really getting warmer as sunset was approaching. The sandstone slopes of Cul Mor were glowing red, and one of the  rock pillars on Sgorr Tuath was lit directly by the sun. This all happened very sudden, and the light disappeared even more suddenly. I would have liked to have made a few more compositional variants in this fascinating light, but it wasn’t meant to be. 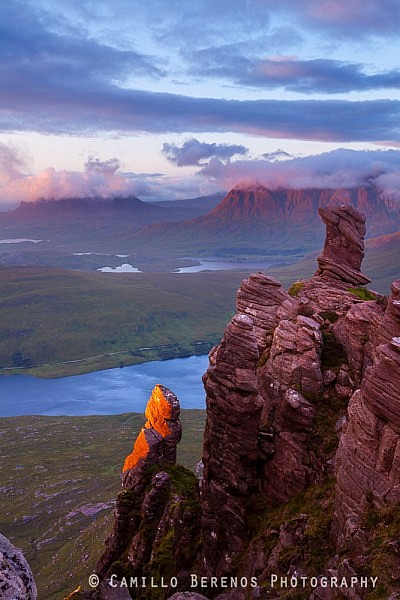 When the clouds disappeared again, the light was immense and truly gorgeous. I ran up the eastern summit again to capture the setting sun and Stac Pollaidh. This meant  I had to use the ultra wide-angle again. I really like how the clouds are lit, it’s almost as if they’re on fire. Compositionally I don’t think this is the strongest of the bunch, as the loch as kind of cut off on the left hand side of the frame. I really should have paid more attention when setting up the tripod, but these things sometimes happen when you’re in a hurry to get the shot before conditions deteriorate. 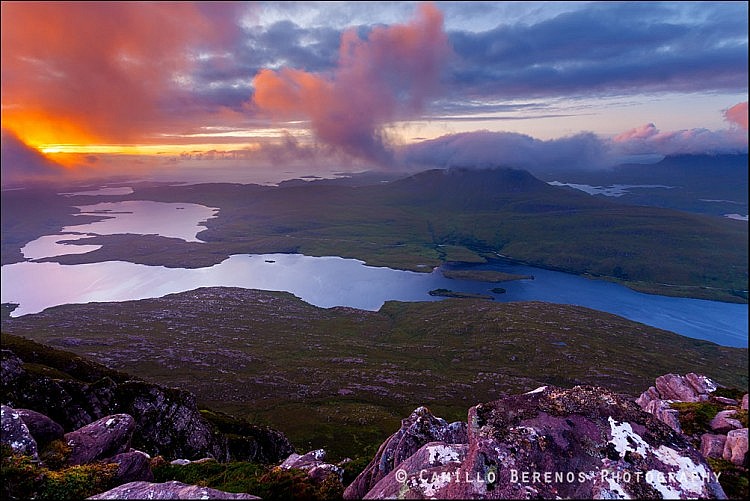 As Scottish west coast traditions dictate, sunrise was not worth waking up for. It was raining, and the summit was covered in clouds until a good few hours afterwards. Perfect weather for the plod back to the car!

All in all it was a very enjoyable trip, with some great light. It was also the first trip using my newly acquired water filter, the Sawyer mini filter, which really makes purifying water on the hill a breeze! So glad I don’t need to drink water which tastes like a swimming pool anymore!

As always, I have this niggling feeling in my head that I should have taken some shots differently, but I guess incomplete satisfaction with your own work is what makes you grow as a photographer.

I hope it won’t be too long before I can start planning my next backpacking trip!

I hope you enjoyed this. Please feel free to share your thoughts in the comments.