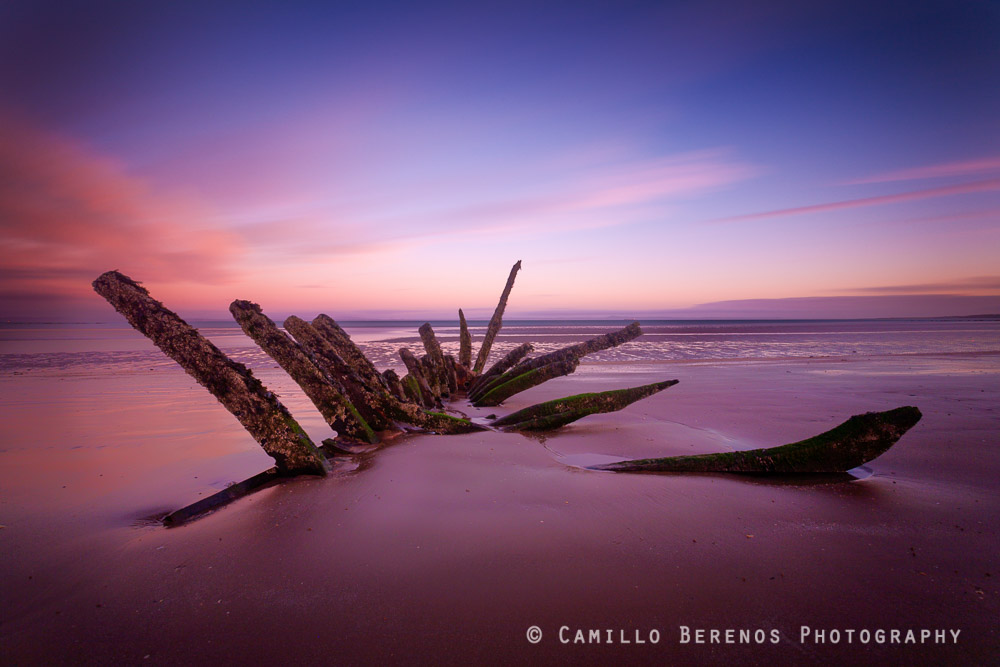 Landscape photography, possibly more than other photography genres, is subject to a lot of luck. More often than not, the odds are against you. How likely is it that the light is good, AND cloud cover is what you were hoping for, AND the tide is right, AND you actually have the time and opportunity to go out and shoot, and then, when finally ready to snap away, the wind does not blow your tripod away? Well, not very often. At least not in my life. Of course, you can kind of increase your chance of success by meticulously inspecting tide tables and the weather forecasts of all the weather stations, but the latter approach is not really reliable in this part of the world. 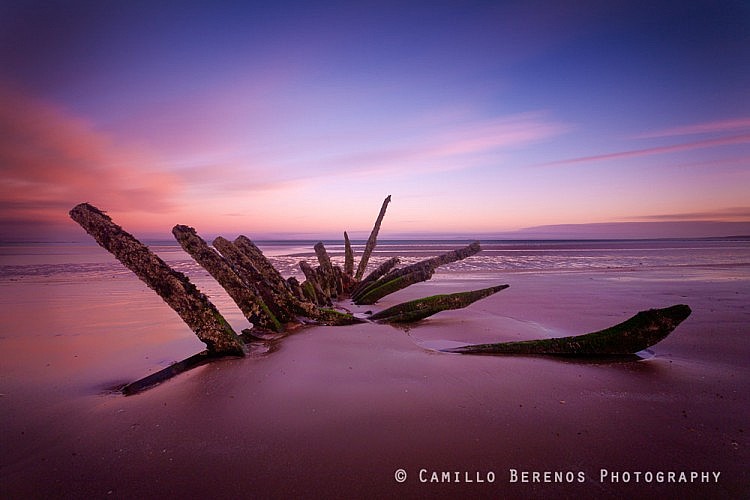 Longniddry shipwreck at sunrise I

Knowing that early mornings are generally best to shoot at the beach, as they tend to be deserted at that time of day, you wake up before the crack of dawn and accept the risk of serious relationship problems as a consequence of waking up the entire household by setting at least two alarm clocks at maximum volume and then accidentally setting one to snooze instead of switching off, skip breakfast and even the essential cup of coffee and head to your destination of choice and just hope for the best. Or, at the very least, no heavy rain.. A lot can be rescued in Photoshop anyway no? As a result, more often than not, I find myself being less critical than needed for sunrise shots, as to subconsciously giving myself a pat on the shoulder for doing the right thing. Not only by not going the pub the night before to avoid the risk of not heading home at an acceptable time, but also depriving myself of three valuable hours of sleep, and spending at least a couple of rounds worth of money on petrol. It must all be worth it, no?

In this blog post you can see a duo of photographs of an iconic photo location in the Edinburgh region, the classic shipwreck at Longniddry beach. And yes, of course the tide was not right. Ideally I would have wanted the tide to be higher, partly covering the wreck. But I had time to shoot that morning, I was there that morning, and the light was not too bad, so I thought I’d better make the most of it. Also, I really wanted the photographs to be worth keeping, as I had just come back from a great but tiring trip to the Northern Highlands the previous night. I had slept in the car for three nights, been on several long hillwalks, and driven way too many hours on single-track roads, so the smartest thing for me to do that morning was to just stay in bed. As a result, I still have no answer to the most basic question every photographer should ask him/herself every single time RAW files have been transferred to the catalog: are they worth keeping at all? And if so, which of the many similar shots we have taken is the very best one? Questions such as these are, while simple in essence, hard to answer so soon after photographs have been taken. My ability to objectively judge my own output is still compromised by not being able to properly weight the time invested and lost hours of sleep against the ability to recognize junk when you see it. Both images are in focus and sharp, composition-wise they both have something going for them, the light was soft and of decent quality, but is meeting these criteria enough these days? Perhaps only time will tell whether I am merely kidding myself to avoid the supreme disappointment Ansel Adams was describing.