Recently I went to good old Seacliff beach on the East Lothian coast again. I left home a little bit late, so only got to the beach 20 minutes or so before sunset peut on prendre viagra. I had been to this beach many many times before, but for some reason I’ve never been here for sunset. The tide was quite high, which was a nice change from the usual low-ish tide when I photograph there. I did not need much time to decide which side of the beach to shoot from, and I quickly set up my tripod. I took perhaps 20 exposures during the course of the evening, which is actually very few, considering that many were bracketed exposures.

Below are the three (long exposure) photographs I have processed from this trip, in the order they were taken.

The first photograph was a blend of two exposures. One using my ND106 @20s for the foreground, and one using the ND110 @120s. I did actually not spend too much time composing this photograph, but in hindsight I think that there’s one element that makes this composition work. The diagonal leading line from the rock in the foreground to the Bass Rock on the horizon is mirrored by the diagonal stripes in the clouds. I can’t say I was consciously aware of this when pressing the shutter.. 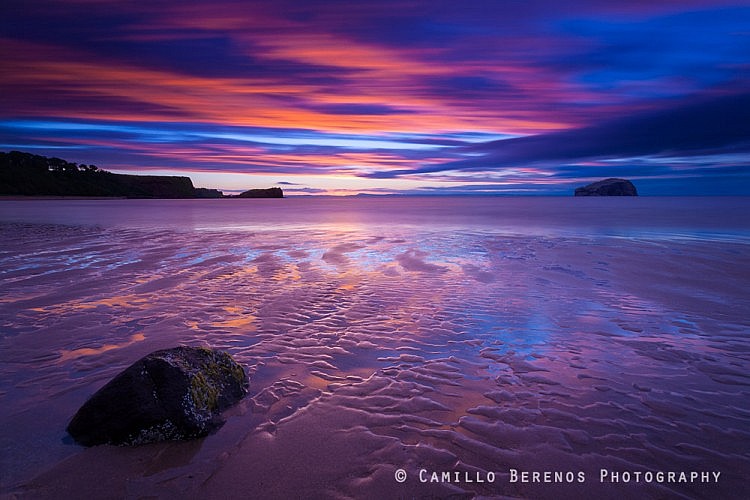 Taken just after the has set on this spectacular beach on the East Lothian coast. I especially liked the ripples in the sand.

The second photograph was taken just moments afterwards. I walked a little closer to the water. As the tide was going out this meant wet unspoilt sand, and the sky was beautifully reflected. Two exposures were blended for this photo (ND106: 20s and 40s). 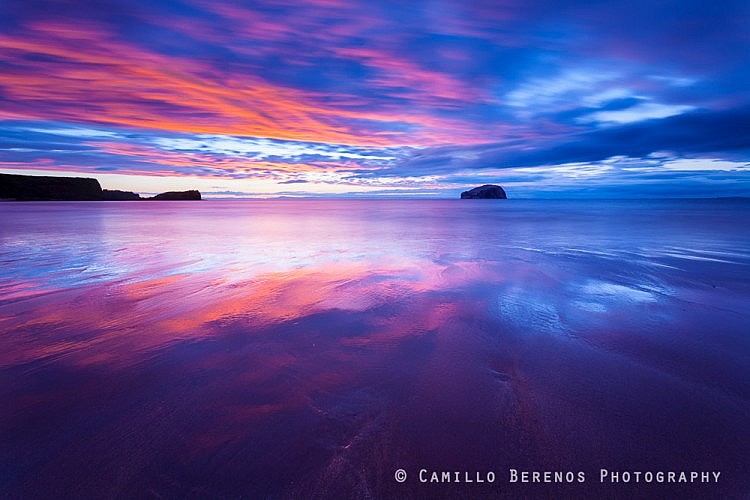 The beautifully coloured clouds reflected in the wet sand on Seacliff beach.

The third photograph was taken when the intense colours were disappearing quickly. I don’t think that the colours are as great as in the previous two photographs, but I do like the golden colours just above the horizon. I had used three exposures here (ND106: 10s, 20s and 40s), but I would ideally have liked the foreground to be a tad brighter. I had to get used to the lack of foreground interest in the two last photographs, but I think  hope that the subtlety in composition is offset by the beautiful colours. 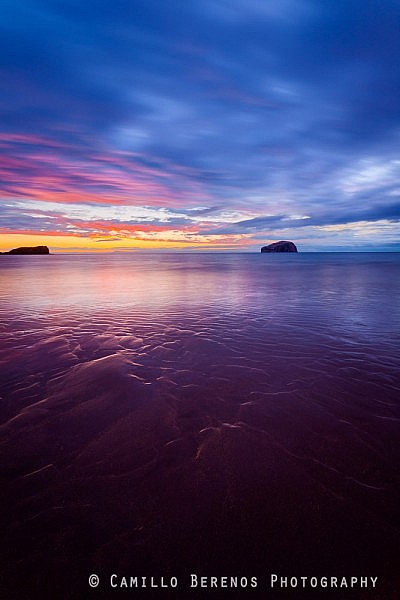 The spectacular colours were fading during the transition to the blue hour after sunset.

I don’t know if all three end up in my galleries, but here you can find more photographs of the Scottish east coast.