Tyninghame beach is probably the most beautiful beach in East Lothian I had never visited before earlier this week. I had known of it’s existence, and it’s beauty too, but I felt I still had unfinished photographic business with some of the other beaches in the area. Now that sunrise is at an almost humane time, I decided it was time that Tyninghame beach and I met.

This meant a 04:35 AM start, which in early, but almost bearable after an early night. After a 40 min drive and a 15 minute walk thrrough some beautiful, but very dark woodlands I arrived at the beach. I almost jumped in the air when seeing the spectacular condition.s The tide was perfect, revealing lost of rock formations which would satisfy my compositional needs. The waves were big, which made me very happy. I’m trying to get rid of the long exposure virus, and I really like the effect fast shutter times has on large waves and surges. The light was also exceptional, even 30 minutes before sunrise, with enough cloud cover to make for an interesting sky.

So, yes, I was over the moon when setting up my tripod, ready to take my first shots. Until I found that the pin on my ballhead refused to respond to me frantically trying to get my QR plate on it. It suffices to say I was a little bit devastated that I had to return home empty-handed….. At home, I luckily managed to get the pin unstuck with the help of some WD-40 and some brute force and the ballhead now operates better than it did when new!

As I like to torture myself, I again set my alarm at 04:40 AM the following day, and went back. And as Sod’s law predicts, conditions were a lot less dramatic. The sea was way too still for my liking, and there were hardly any clouds. nd to make things worse, the tide was way higher than the day before, meaning that most of the rock formations were submerged and not usable the way I planned. There was still hope though, as the tide was going out.

This first shot was taken quite a bit before the actual sunrise. I often like the blue hour more than the sunrise itself, which probably means I am a little weird! I found these little bits of seaweed which I quite liked. For maximum effect I was hoping for the waves to wrap around them from time to time, creating strong white streaks when receding back to the sea, but the waves were not powerful enough. This was the best I managed.

Blue hour at Tyninghame beach near North Berwick before sunrise on a clear morning.

Eventually the tide went out enough to use some of the rock formations as foreground interest. Here I found this great chute in between two rocks which got hammered by some great waves. I really liked how the waves channeled through this chute. Of course, it was quite hard to get that perfect  amount of blur in the waves, and that perfect streaky pattern, so I must have fired off 10 strategic shots or so. And yes, the Bass Rock can be seen in the distance. It is criminal to take photographs between North Berwick and Dunbar without at least a few of them featuring the Bass Rock. So here you go. 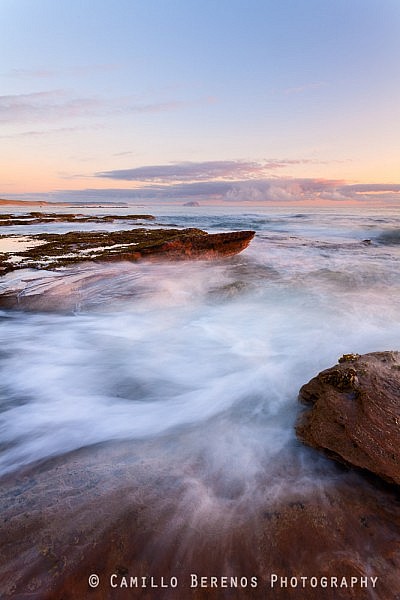 Sunrise at Tyninghame beach with blurred waves channeled through a chute between rocks. The Bass Rock can be seen in the far distance.

This one was taken shortly afterwards. I wanted to get closer to some of the wave action, and here you can see the (blurred) waves crashing on the seaweed-covered rocks in the foreground. The distant headland on the left is Seacliff beach, one of my most frequented beaches on the East Coast. 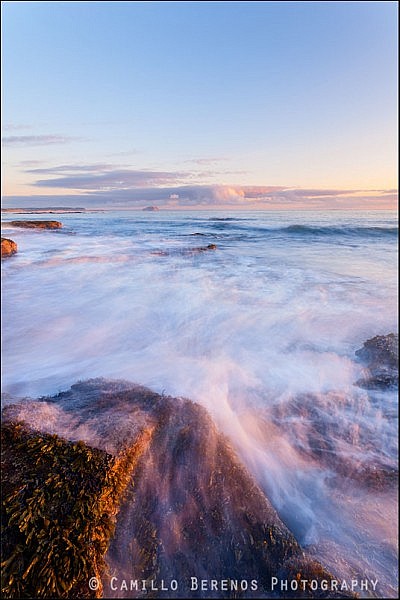 In summary, I think it has been  decent session. No true killer shots, as conditions were not spectacular, but good enough to justify the early wake-up. I should definitely give Tyninghame beach a few more chances, as there is a lot of potential, especially at lower tides.