A couple weeks ago, I managed to find time to string together two overnight hillwalking trips in Northern Scotland. First, I camped on Bidein a’Ghlas Thuill on the impressive ridge of An Teallach, which was a stunning vantage point, and I even managed to take a few snaps of a dramatic sunset. On the second day, the plan was to do a summit camp on Cul Mor, a Corbett and prominent peak in the Inverpolly region north of Ullapool. While I have reached the bealach below Creag nan Calman on a walk earlier this year, I never made it to the summit as conditions required crampons which I conveniently left in the car! Besides wanting to bag the Corbett, I also felt that this mountain offered fantastic views and beautiful sandstone formations, two features I’d like to exploit photographically. So this meant that another wild camping trip in Inverpolly was needed!

I am not going to go into much detail about the walk itself, (the route can be found here) but for most of the ascend it was a steady slog over boggy terrain. I guess the recent monsoon-like quantities of rain may have played a role here too. The recommended ascend to Cul Mor goes over the North-Eastern ridge, where I initially failed to find any path and took pretty much a direct line up the steep hill. Luckily I spotted the path after a good 15 minutes which meant slightly easier going! Upon reaching the summit of Cul Mor I was surprised by the strong winds again, and for a while I feared that there would be no point setting up the tripod as camera shake would be inevitable. However, to my relief I quickly realised that there were frequent lulls in between gusts.

On the summit of Cul Mor I was amazed by the wonderful Torridonian rock formations. While not as impressive as some found on Sgorr Tuath in Coigach they were still breathtakingly beautiful and diverse in shapes and textures. I decided to use some of the larger sandstone formations to frame Suilven, a mountain ridge to the north of Cul Mor. I have yet to climb Suilven, but I am convinced it won’t be long until I’ll be finally enjoying the views from that mighty Assynt summit. 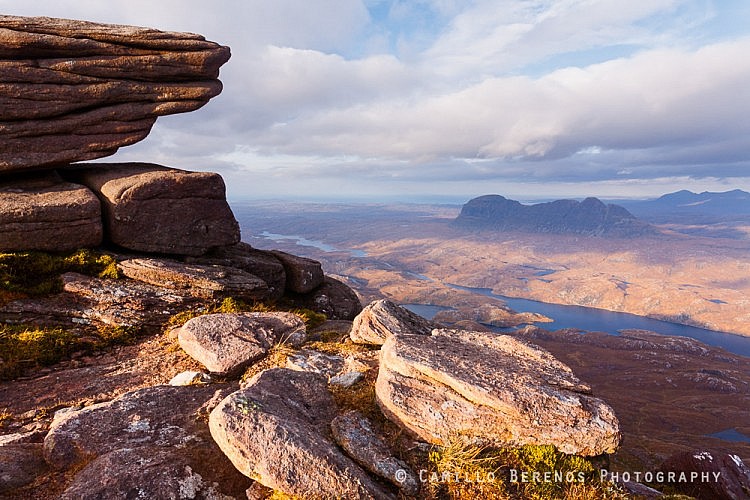 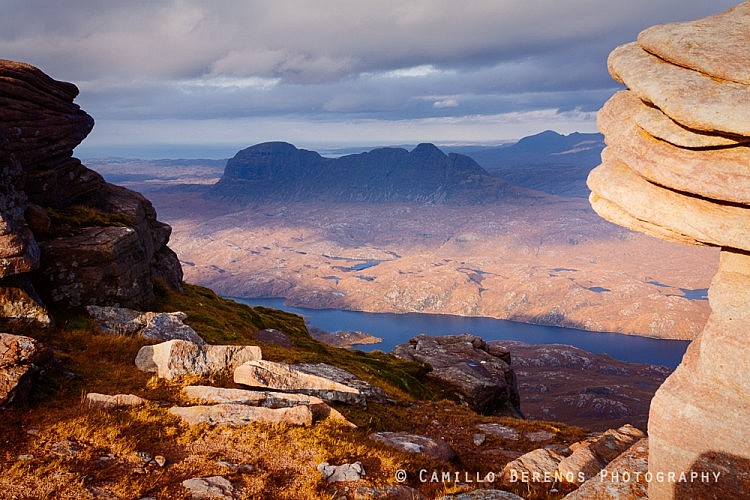 After admiring the warm afternoon light on Cul Mor I descended towards the bealach below Creag nan Calman where I found a sweet spot to pitch a tent. The picth was much flatter, dryer and less exposed to the winds than the night before, so i counted myself lucky! In addition, pitching the tent was effortless now that I knew how to pitch it!

Unfortunately, sunset was very disappointing. The sun disappeared behind thick clouds well in advance of sunset, and there were no colours, or even any beautiful blue hour light! I did take many “insurance” shots, but I doubt that any of them will ever see the light! Disappointment with conditions is the landscape photographer’s name of the game, so I did not despair long. There was still the potential of a nice sunrise to look forward to!

Despite the feezing temperatures (the tent was frozen on the inside) I had a good night sleep. I woke up very early, and ascended Creag nan Calman in the very faint light of a crescent moon during the twilight hours, more than an hour before sunrise. It was not a long climb, and my head torch did its job, but crae was needed as the ground and dew-covered vegetation was frozen, making for slippery terrain. I reached the summit safely, and sat down to admire the amaizng views over the primordial landscape of Inverpolly and Coigach. Cul Beag, Stac Pollaidh, Ben More Coigach, Beinn an Eoin and Sgorr Tuath could all be seen and looked imposing in the blue hour light. I took quite a few photos including the moon at this stage, but noe of them were critically sharp. I should stop using autofocus when it is so dark, which is not a mistake the pros would make!

With sunrise approaching, the light was turning brighter but there was a very serene atmosphere throughout the progression towards sunrise. 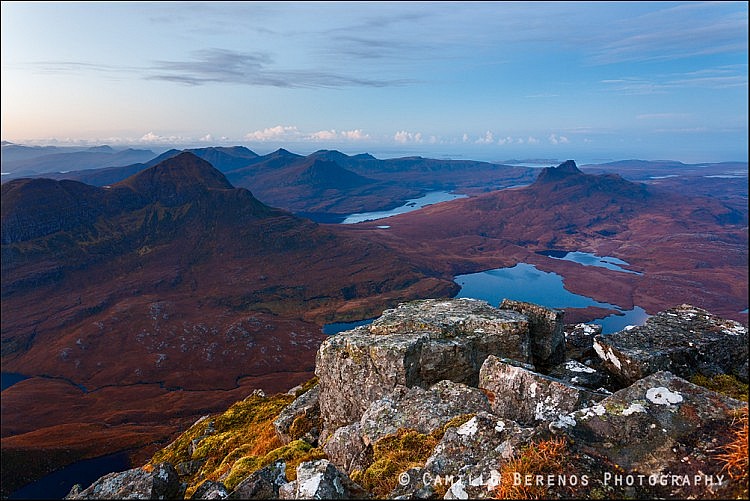 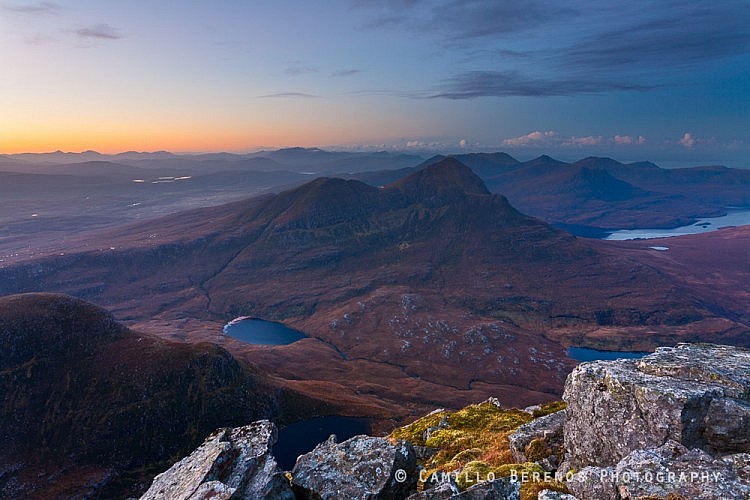 Cul Beag, Inverpolly during the blue hour at dawn.

I really like how the colours change during the blue hour. Here the blue hues were transitioning into soft pink and violet tones. 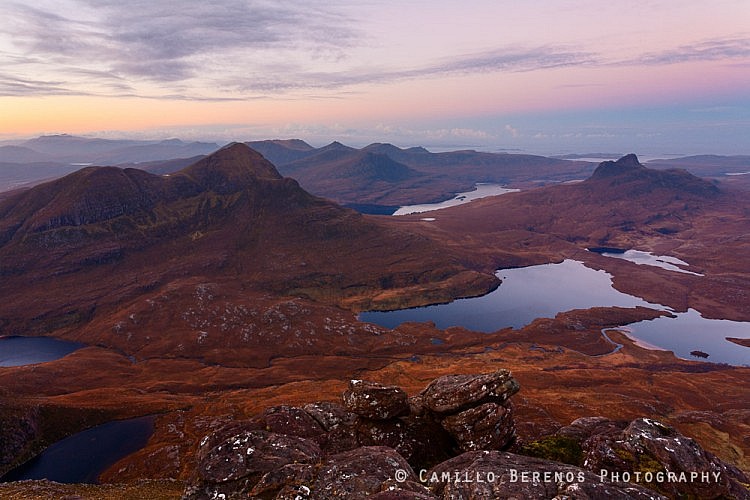 While the summit provided excellent views, I was not entirely pleased with the foreground possibilities and I decided to head down a little bit. I am a sucker for foreground interest, and I was hoping to find some sandstone formations lower down. I ultimately found some, though this meant that the sun would rise behind the satellite summit of Cul Mor. 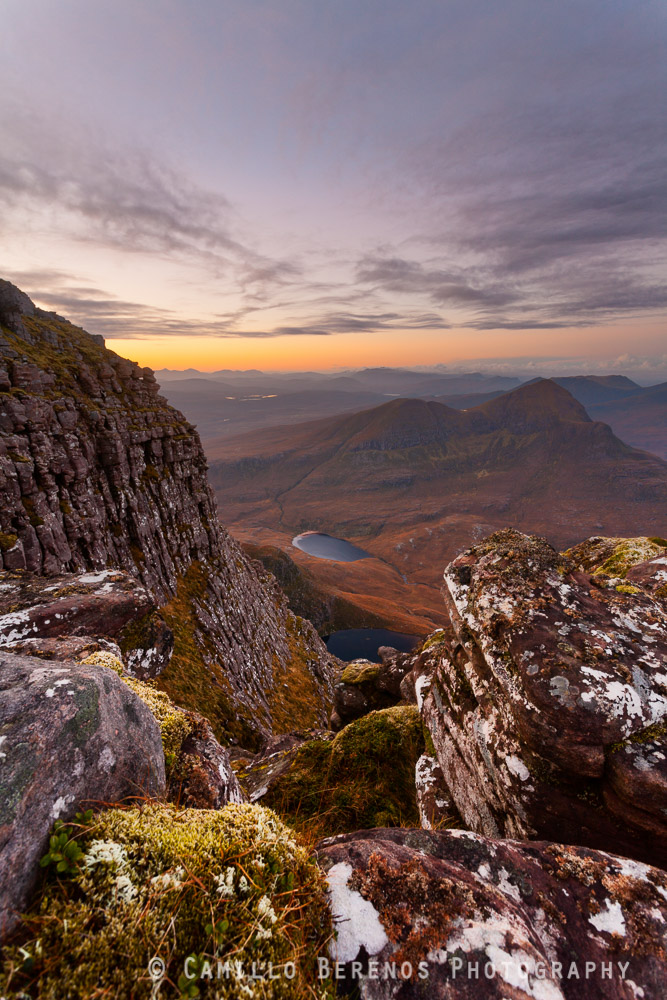 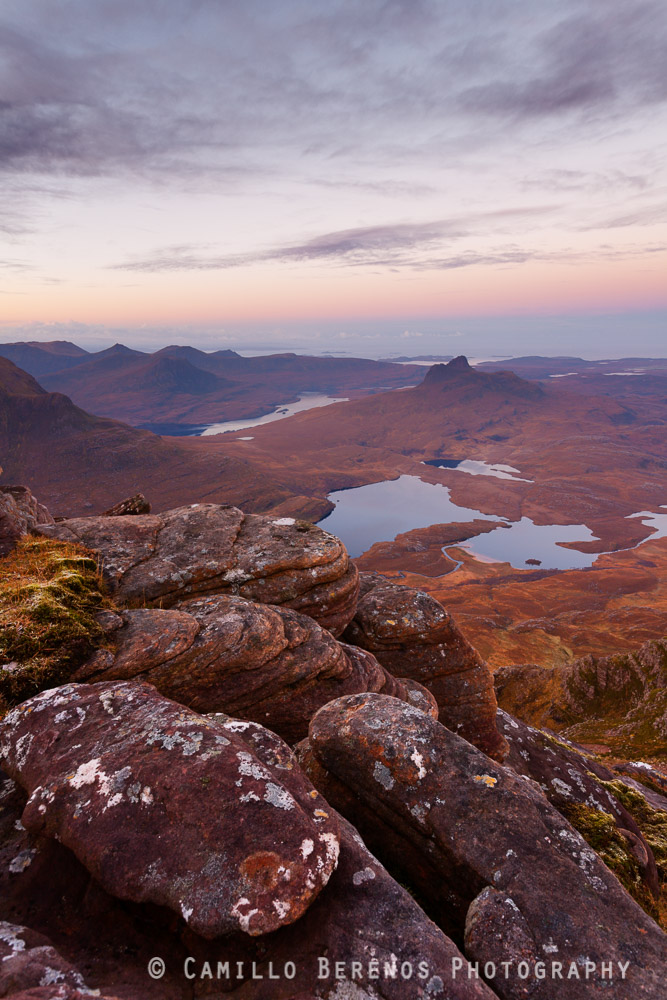 Sculptured Torridonian sandstone formations on Cul Mor. Stac Pollaidh, the craggy hill on the right, never ceases to impress me. 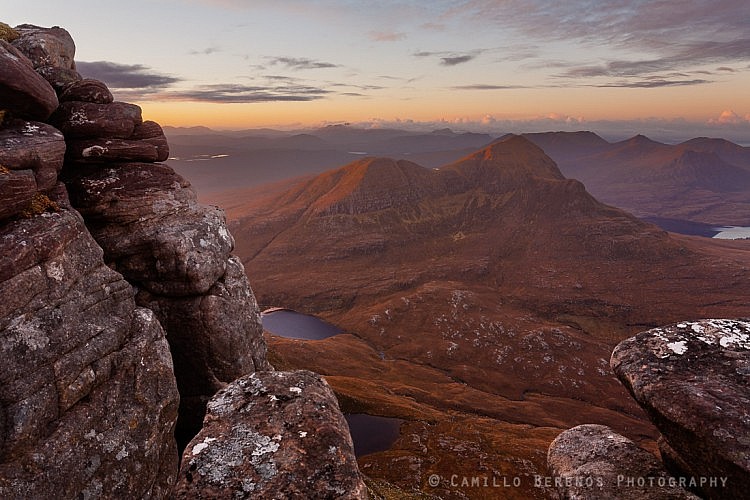 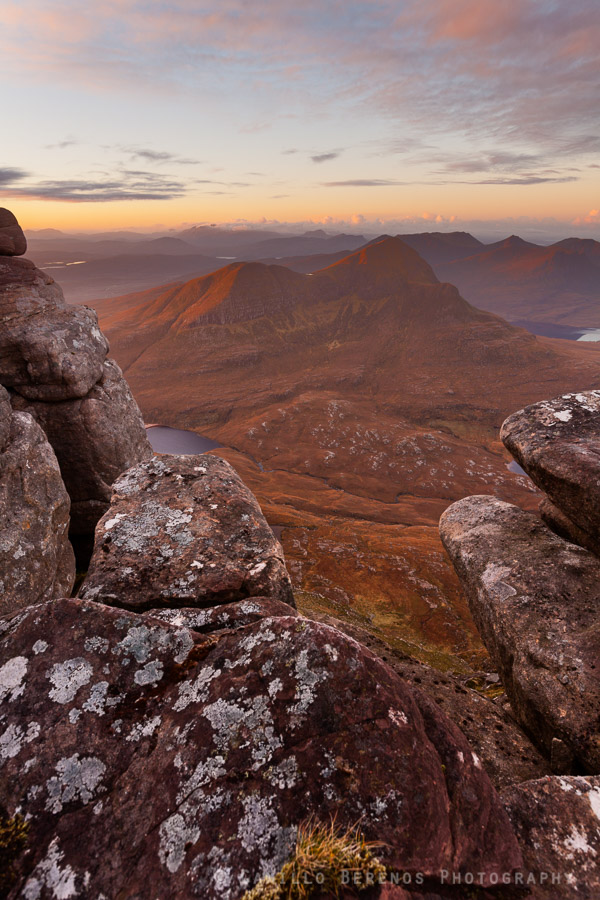 I can never choose between landscape and portrait orientation, so here is a vertical composition of the same scene. The portrait compo emphasizes the Torridonian sandstone in the foreground a little more. 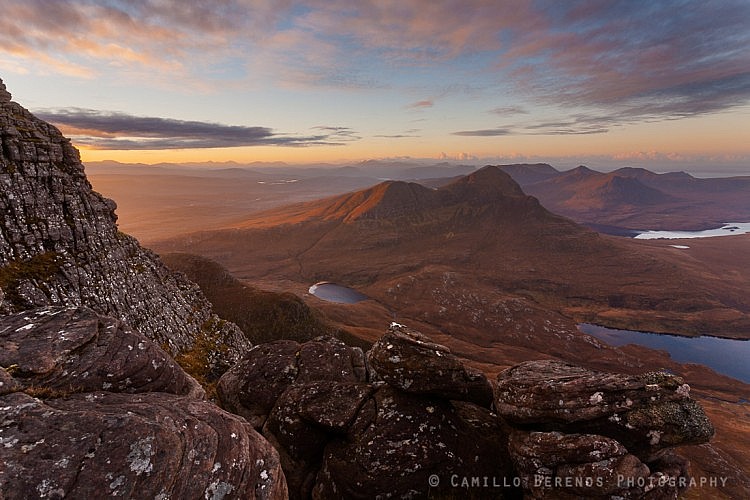 Wider view of Cul Beag during sunrise with the steep slopes of Creag nan Calman on the left.

By now I had exploited all the compositional possibilities that came to mind, and the sun would disappear behind clouds a few minutes after taking this last photograph. I find that at dawn I start shooting quite early during the blue hour, and by the time sunrise occurs, I feel exhausted from scouting for compositions and the creative and neurotic behaviour that is associated with getting it right in the field. I am not sure if this is why I generally prefer the light pre-sunset over the golden hour, but I’ll have to try giving the post-sunrise light the credit it deserves.

When I was taking the down the tent on the bealach I did have a little moment of panic when I could not find one of my lenses. Then it dawned on me that I may have left it in a drybag on Creag nan Calman, when I was preparing to take photographs. I dashed up the hill, and was relieved to find it there! Note to self: always imediately repack my photo bag when setting up!

All in all this was a fine outing, and I thoroughly enjoyed the two back-to-back wild camping trips. While changing weather meant that I did not get the photos I had in mind, adaptability is key when it comes to photographing mountains and landscapes in general. And perhaps, it’s the unforeseen photos that will mean the most to me in the end.