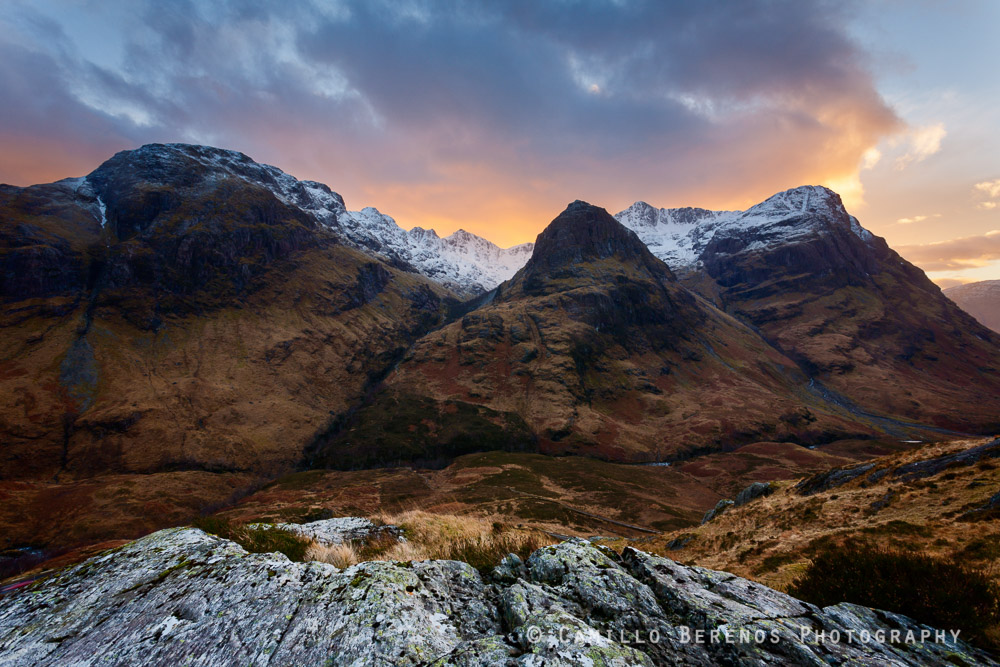 After I photographed the sunrise from the summit of Beinn a’Chrulaiste a few weeks ago, I spent the rest of the day exploring Glen Etive and Glen Coe.  They are among the most frequently photographed glens in Scotland, and partly for this reason I have neglected them almost completely over the last couple of years. I wanted to build a portfolio containing photographs of the Scottish Highlands taken away from the parking lots, often taken while wild camping at higher levels. My love for photography primarily comes out of my love for spending outdoors, and much less out of a desire for trophy-hunting or ticking off iconic photographic places of a list. And I felt that in Glen Etive and Glen Coe, it would be hard not to use other photographers’ tripod holes! But given that I was there now, I swallowed my pride, and went on a jaunt through the two majestic glens. And you know what? I thoroughly enjoyed it, and I even returned for more a few weeks later!

Below you can find some of the photographs from this trip. 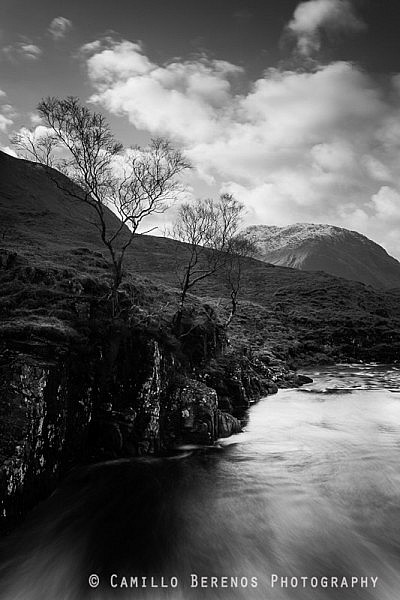 When I visited Scotland for the first time on a summer holiday, me and my travel mates bathed just upstream from this point to cool down after a long walk over the ridge of the Buachaille Etive Mor. On that trip, I also took some photographs of this section of the River Etive, sadly none of which made it to the website. Here I used a medium long exposure to get some motion blur in the river without turning it to much. 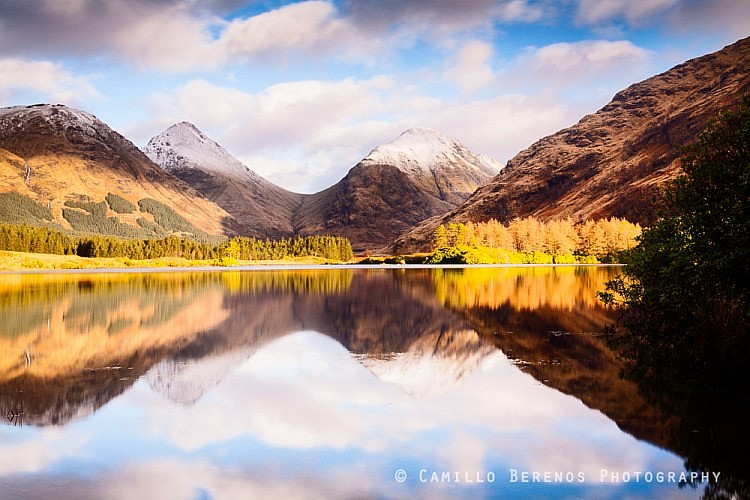 Reflection of Lairig Gartain separating the Buachaille Etive Beag from the Buachaille Etive Mor in Lochan Urr, Glen Etive. The soft afternoon light made the scene look like a photograph taken in autumn, with the vibrant yellows, and  I liked the resulting richness in yellow and green hues in this one.

I am known for my almost complete reliance on my trusted 17-40L, which I tend to use at its widest setting. I do own other lenses, and I do use them when the scene ends itself to it. Here I used my 70-200 to isolate this patch of trees against a backdrop of the steep hills on the south side of Glen Etive. 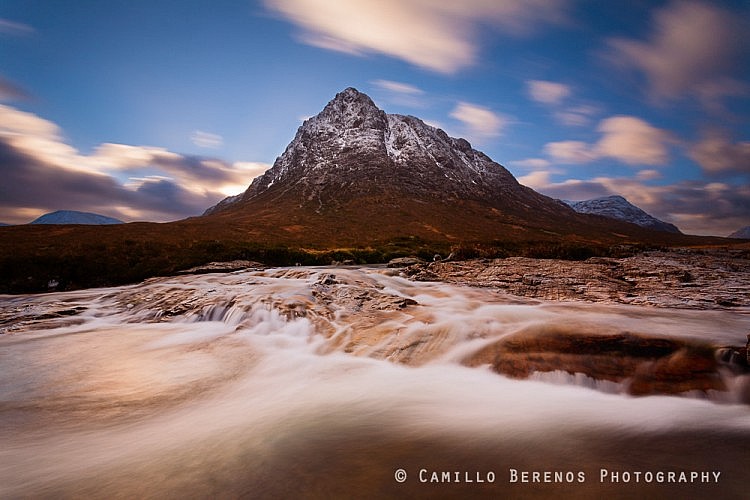 Stob Dearg, one of the Munro summits of the Buachaille Etive Mor, dominates the surrounding landscape for miles, and is perhaps the most photographed photograph in Scotland.

And finally I went to Glen Coe to photograph the Three Sisters of the Bidean nam Bian. After driving back and forth to find a parking space (Most of the Scottish population must have been in Glen Coe that day. It was the last weekend of the Christmas holidays, and the weather was fantastic) I walk up the slopes on the other side of the valley. I wanted to get to higher levels, not only to get away from the crowds, but also to get some compositions where the road would not be visible, or at least not so prominent. And luckily I found some nice rocky slabs, which provided some foreground interest to boot. Sunset was approaching, and the light turned out to great. 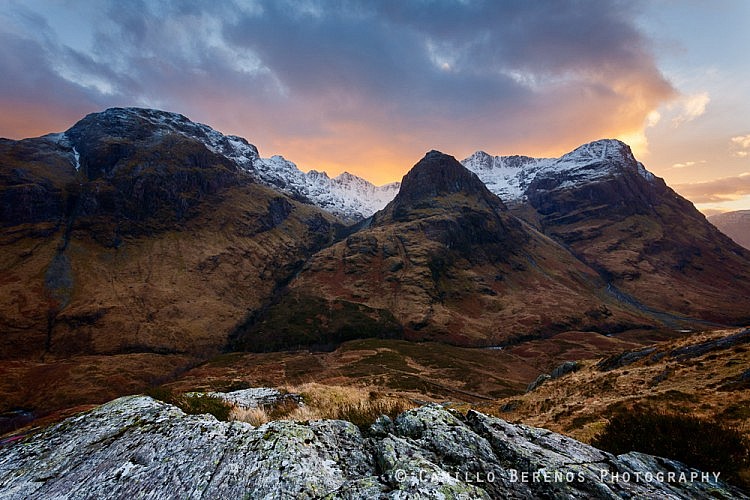 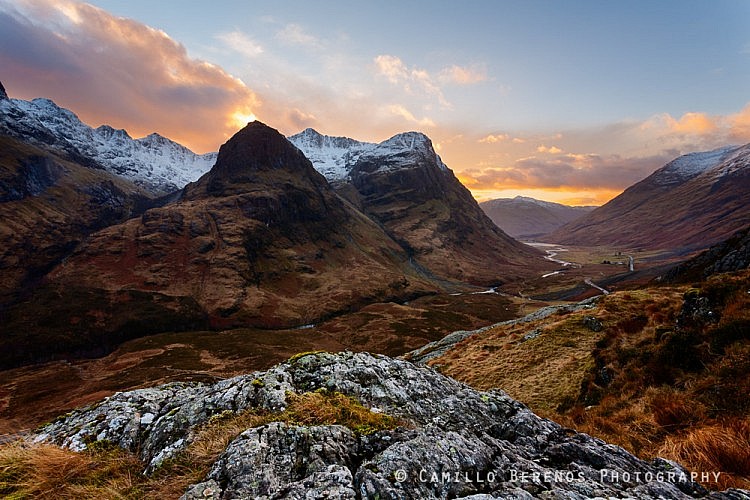 View over the Bidean nam Bian at sunset. A little section of the A82 road to Glencoe can be seen on the right. 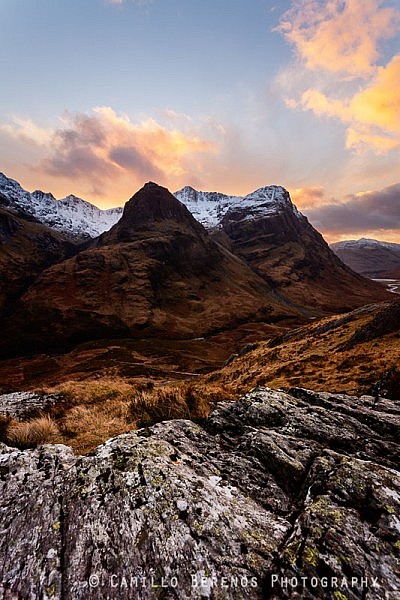 A dusting of snow on the summits of the Bidean nam Bian really livens the up.

All in all, it was a productive, tiring and also highly inspiring day, revisiting some old locations, and exploring some new ones. Despite the glens being flooded with photographers, I was by myself on all occasions, which was was a nice surprise.