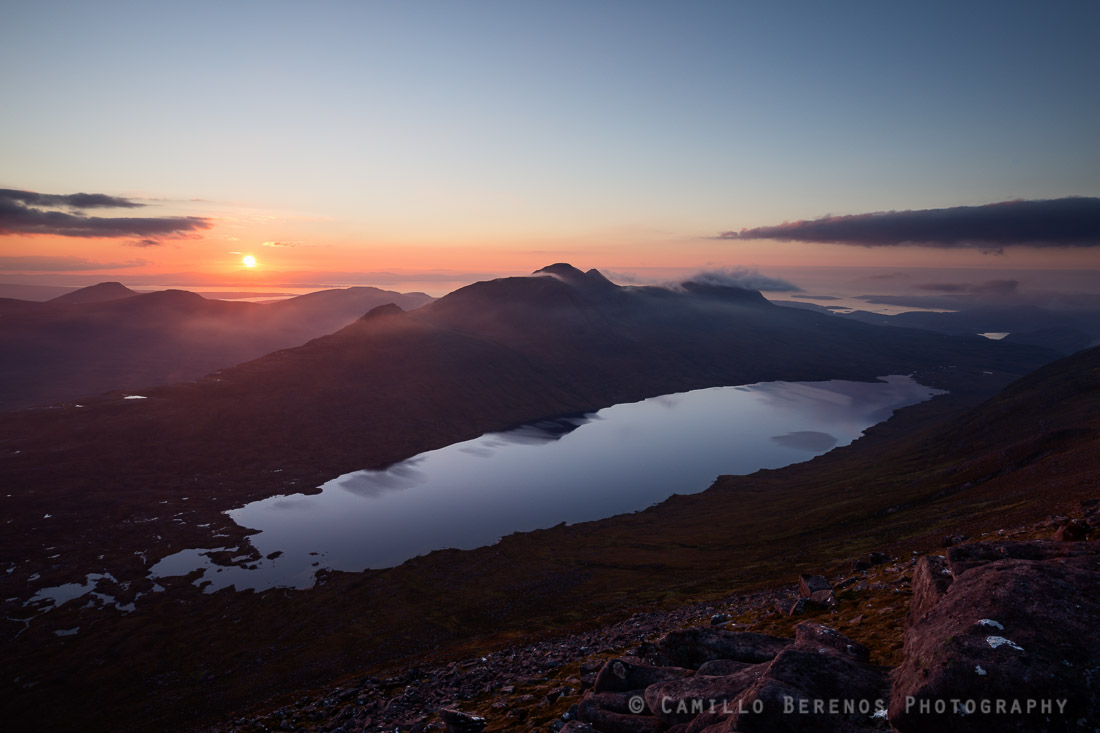 More than a year since my last wild camp in Torridon, I recently finally found time to squeeze in another short-notice overnight escape to the region. While the Munro-bagger in me was keen on doing Liathach (the only hill containing >3000 ft summits in the region which is still on my ticklist), the escapist and seclusion-seeking inner self wanted something less predictable and more remote, while still offering fantastic views. And as the latter part of my split personality has recently had the upper hand, I opted for one of the smaller hills to the north of the three hills collectively known as the Torridon giants: Beinn Eighe, Liathach and Beinn Alligin. Based on walk reports two hills looked very promising: Baosbheinn and Beinn an Eoin, and out of these two, I decided to give Beinn an Eoin a whirl as it looked more centrally positioned with regards to the other hills.

Due to Beinn an Eoin’s position away from the roads, a moderately long walk (ca 7km) was required before the luxury of a trail was left behind, and the harsh reality of bogs, steep inclines and reliance on one’s own route finding skills awaited me. And Gairloch Estate has to be lauded for their well signposted network of trails, which makes access to the hills much more pleasant, and gives tourists who are not necessarily classified as hillwalkers an opportunity to experience the raw beauty of the hinterland. Other estates: please take note!

The ascent of Beinn an Eoin was reasonably off-piste, as it was very boggy, craggy, in places very steep and, as is usually the case for hills that aren’t popular with those ticking off hills from a list, there were hardly any footprints let alone any semblance of a path. Not surprising really, as while I met plenty of walkers on the trail, I didn’t meet anyone while on the hill itself. But height was gained quickly, and the ridge was reached before I knew it. A beautiful view unfolded, looking out over Loch na h-Oidhche, Baosbheinn and Beinn Alligin. A truly mesmerising wilderness, moorland without end! The experience wasn’t only visually impressive, the bellowing rutting stags added considerably to the audible component.  While I could have sat there all day, after a nice rest and a quick bite, I continued along the ridge to the summit of Beinn an Eoin, a mere 2 km away now. Most of it reasonably flat, before the final uphill pull. Just before I reached the summit a golden eagle took off and flew away. They’re really quite impressive from up close. For a moment I feared that it was nesting there and that I had disturbed it, but I couldn’t find any signs of a nest, so I hope all was good.

The tent was quickly pitched, though as usual, a compromise had to be found between choosing a dry spot or a flat spot. I now had ample time to just sit, eat and admire the views before the (harsh) light would change for the better.  Beinn an Eoin is truly an exceptional vantage point. To the south, Beinn Eighe, Beinn Dearg, Liathach and Beinn Alligin arguably steal the show. To the west, the long ridge of Baosbheinn, largely parallel to Beinn an Eoin, is not far behind. And to the north, Slioch and more distantly the Fisherfield mountains and even An Teallach can all be seen.

After some contemplation the light arrived. 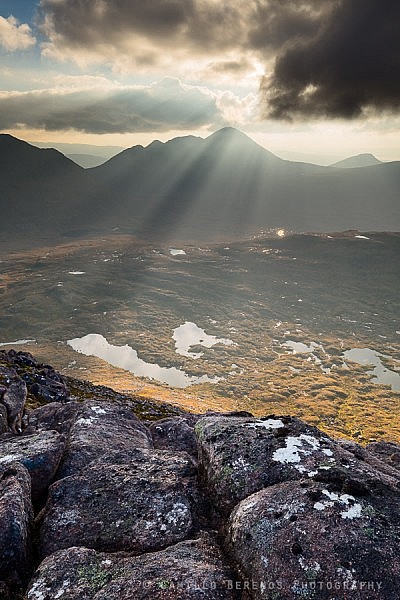 Panorama of from left to right: Beinn Eighe, Liathach and Carn na Feola 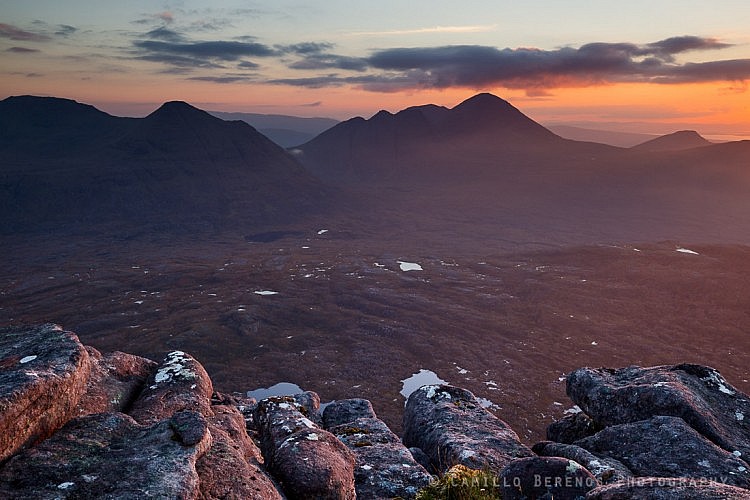 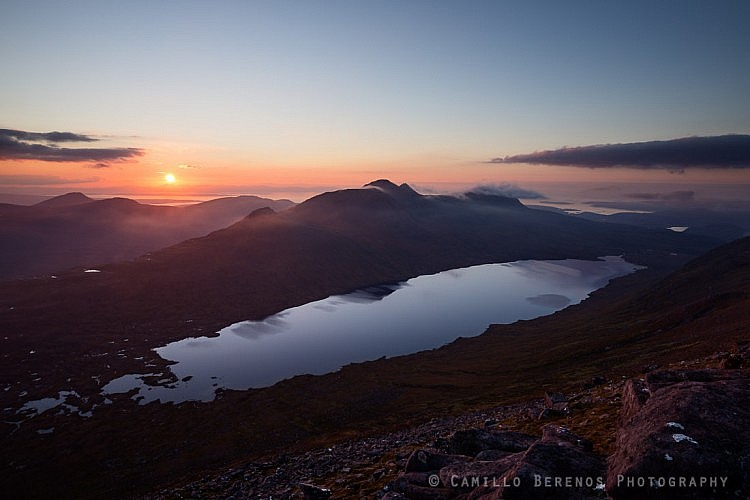 Sunset behind Baosbheinn in the Flowerdale Forest. 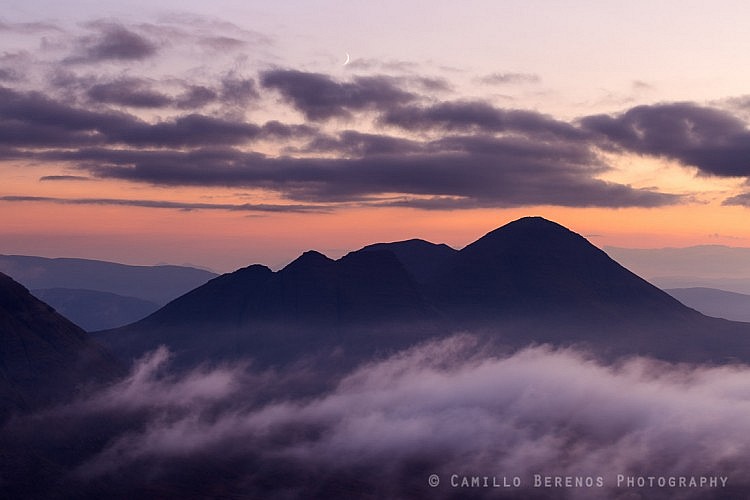 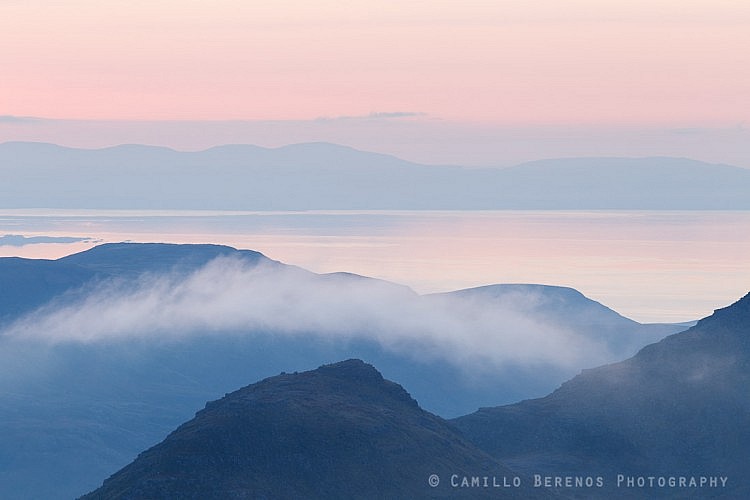 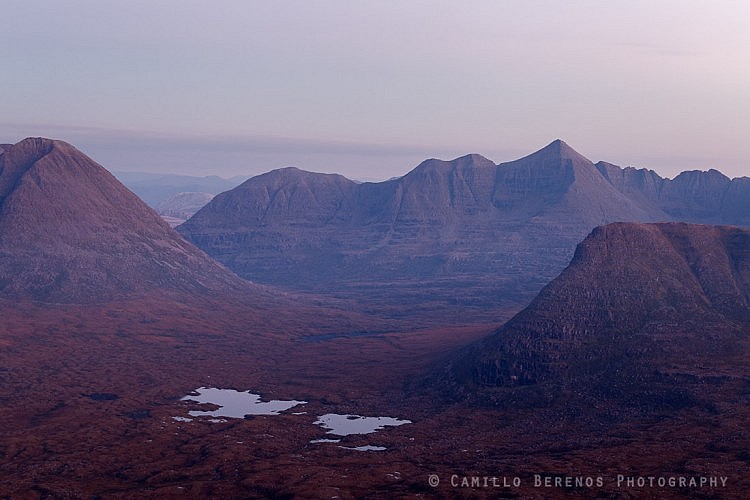 After dusk gave way to darkness I stayed up for quite some time, gazing and marveling at the stars above. I even tried a bit of night photography, but not sure it was very successful. It’s definitely a genre I’d like to try again!

But eventually it was time to retire to bed, well, my Therma-rest Prolite to be exact, but that’d do. It was a very crisp night, and the temperatures mus have gone below zero as the frost on the tent and summit showed. Nevertheless I was nice and toasty in my sleeping bag. There was more condensation than I’d liked on the inside of the tent, but I guess that’s inevitable with a complete lack of wind especially when temperatures drop this much at night.

As usual, I set my alarm way too early and was out of my tent before twilight even started. I could see that the skies were still very clear, not exactly my cup of tea, but at least I could see further than the length of my arm. One of the beauties of landscape photography is that we just have to take the conditions as they are, and we just have to improvise, making the most of the combination of light (quality and direction) and shapes.

In the photo below, I was just captivated by these ridges which formed a naturally layered composition. I don’t even know which hills they are a part of, and they’re certainly far less impressive than most of the other hills that were visible. But light (IMHO) dictates whether a composition has any merit, and the light was definitely doing something very pleasing. 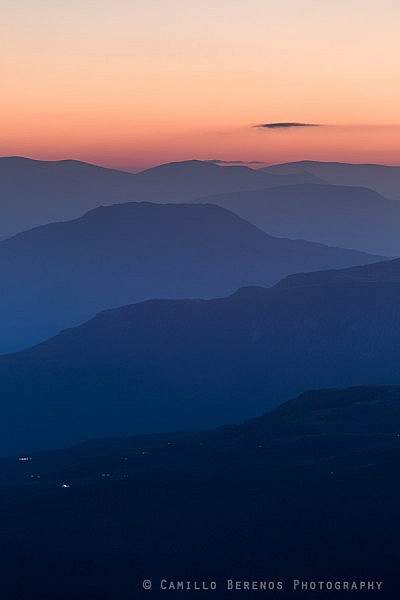 Layering effect of distant hills in Torridon captured with a long lens at dawn.

Not much later, I photographed Beinn Eighe and Liathach in very similar light. And though the scenery is far more spectacular than in the previous photo, it shows that a spectacular landscape doesn’t necessarily equal a great photo. 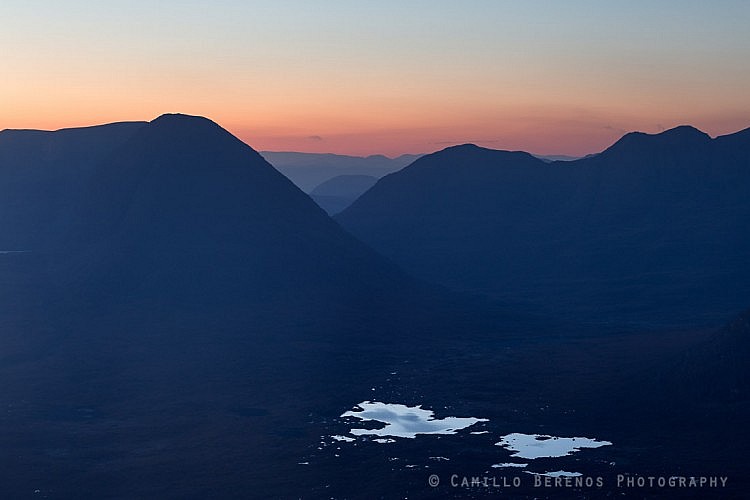 Beinn Eighe and Liathach at dawn

As usual, dawn lasted far too short to my liking. I must be some sort of vampire, preferring the mystery of the near-dark, as I usually pack all my gear as soon as the sun crosses the horizon. But I decided to see what sunrise had to offer. 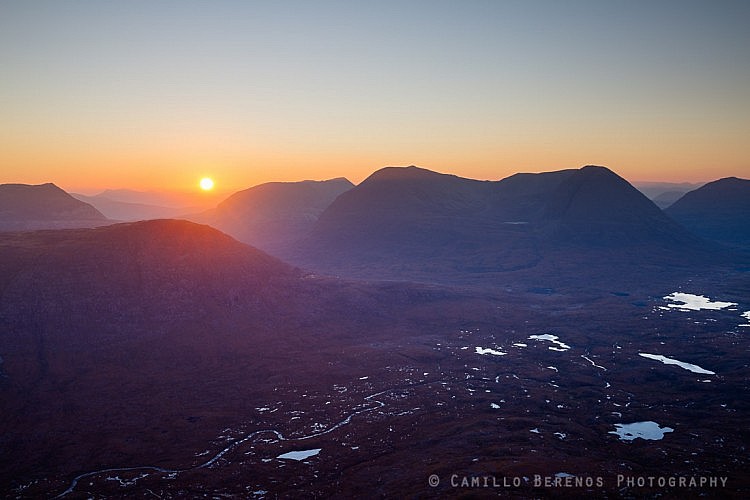 The sun rising above the rugged landscape of Torridon with Beinn a ‘Chearcaill and Beinn Eighe towering high above the moorland. 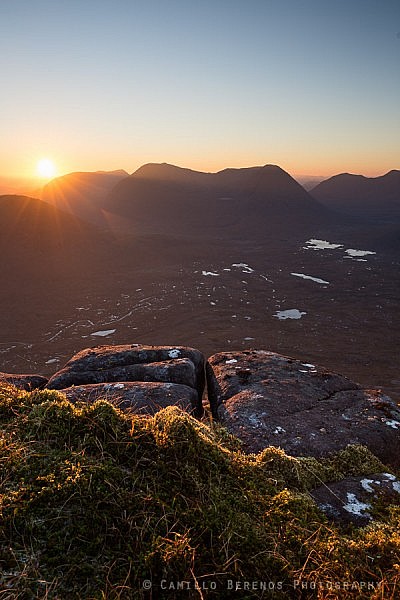 The imposing massif of Beinn Eighe at sunrise from Beinn na Eoin.

And I’m glad I did, as despite the almost complete lack of clouds, it was a great explosion of light. You can’t really look the other way when nature throws such a scene, can you?

Feeling energised, despite the short night, it was sadly time to pack up, and head back. The walk back to the car was just a matter of retracing my footsteps along and down the ridge, and the trail was soon reached, which meant an easy going back to the car while constantly thinking of when the next opportunity for a wild camp would present itself again…

If you’ve not had enough, more photographs taken on this trip can be found in my recent work section and to see more photographs of mountainous scenery of the Scottish Highlands, please click here. Prints can be purchased here.