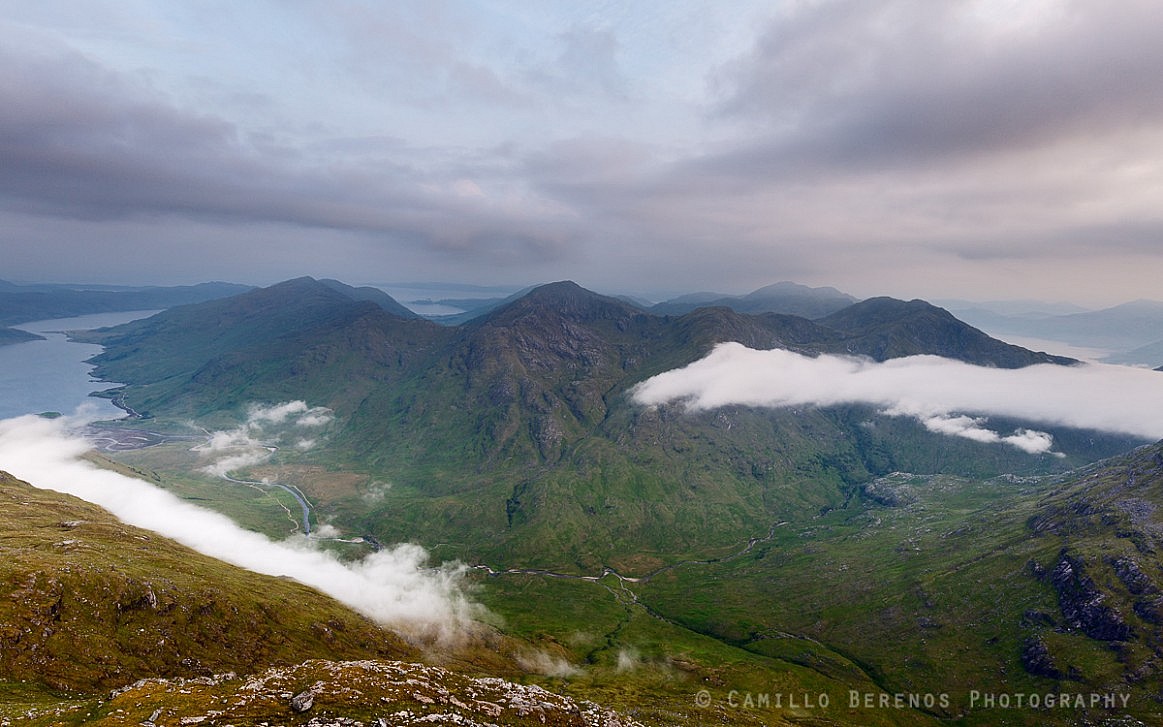 Like many outdoor enthusiasts, the hills in Knoydart have been very high on my wish list for a long time. A vast area of wild land cut off from the rest of mainland Scotland by high mountains or the sea, one of the last areas which claim to the last of the remaining wilderness in Scotland. Exploring this rugged land requires either a very long walk in or a boat trip, neither of which suits my usually very narrow window of opportunity. There are some hills which sit just outside Knoydart proper, but which are firmly within wild territory. Sgurr na Ciche, at the far end of Glen Dessary is one of those, and was where I intended to pitch my tent some time ago.

The walk I had planned (or rather nicked from the Walkhighlands website) would still be demanding and hard going with a total length and ascent of 27km and 1500m respectively, but including the long drive back and forth could easily be squeezed into a day and a half.  Getting to the start of the walk proved to be almost as challenging as the walk itself, as I tend to get motion sick very easily, and the windy and bumpy drive along Loch Arkaig was testing my limits…

The weather was absolutely sublime, it was far warmer on the west coast than it had been down in Edinburgh. Having completely acclimatised to the Scottish climate this turned out to make the walk hard going. The first few hours are pretty flat, but as soon as I ascended  Sgurr nan Coireachan the struggle started.  I usually power through an ascent, but regular breaks were needed this time. Only to admire the views, honest guvnor! Many false summits weren’t helping either, but eventually the summit was reached. Stunning views were had over Loch Quoich and Knoydart in the distance. It was a bit on the hazy side, but I couldn’t complain really, as I felt lucky to be in such unspoilt scenery. The views over the ridge ahead made it clear that the hard work was far from over though! 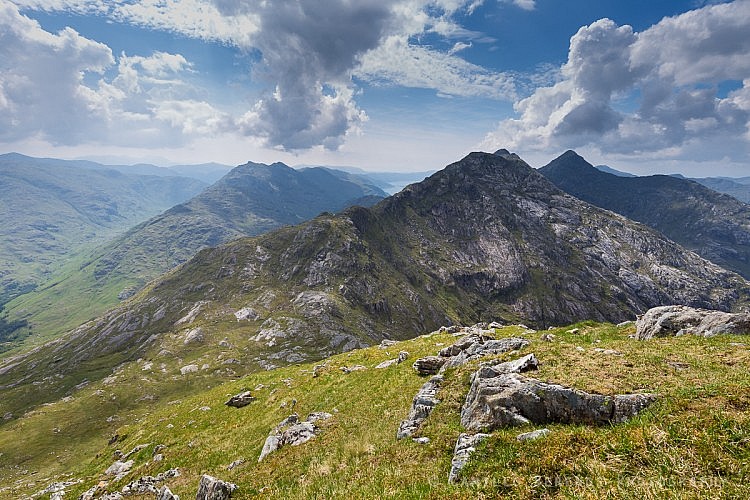 The view from Sgurr nan Coireachan over Garbh Chioch Mhor and Sgurr na Ciche: that’s a lot of ups and downs!

And indeed, the long ridgewalk definitely got my blood pumping. The route was never technical, and navigation was aided by an old stone dyke which followed the majority of the ridge. I suppose everyone who’s walked this route must wonder about its origins. It must have been quite an undertaking to build it in such a remote and harsh setting. As with the ascent up Sgurr nan Coireachan, false ascends were the order of the day, but I reached the summit of Sgurr na Ciche several hours before sunset. I pitched the tent a short walk away from the rocky summit, on a ice and cushiony piece of bog, right next to a little tarn. Prime midge location as I found out!

The haze that had been around all day became thicker as sunset approached, and clouds rolled in from time to time. Not great for photography, but I shot some insurance photos just in case there wouldn’t be any views at sunrise either. 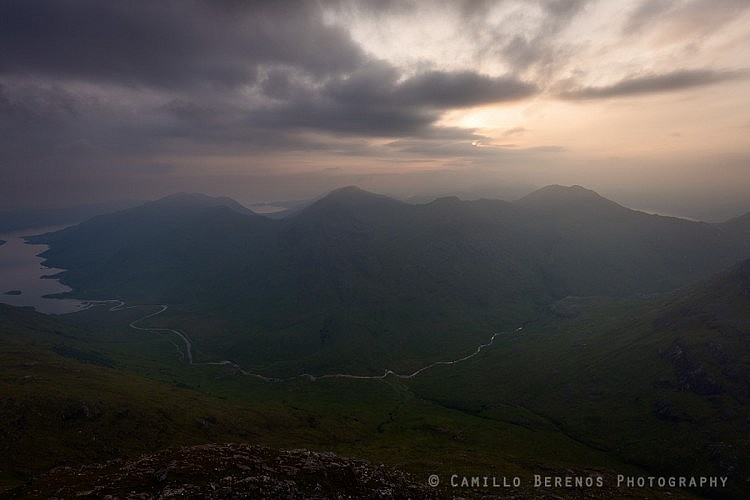 The River Carnach meandering at the base of the Knoydart hills 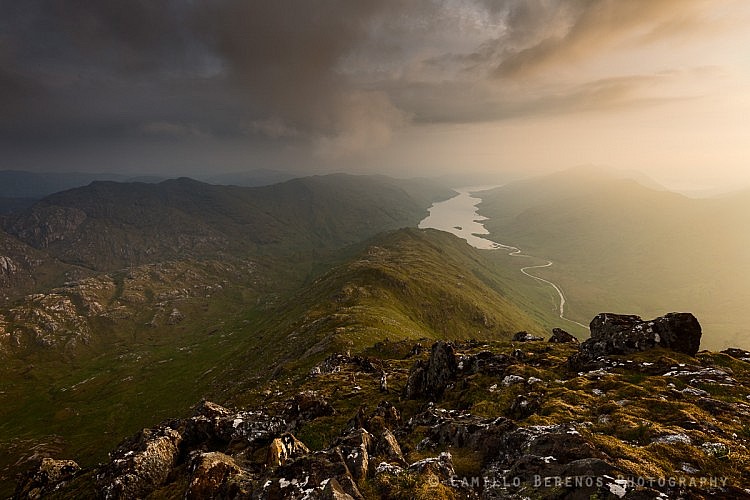 However much I enjoy my time outdoors an sich, I couldn’t help retiring to the tent feeling a little deflated. I was staying optimistic about next morning’s light, but it is still a nice feeling to have some keepers in the bag on day 1. But alas, we can only ake the most of what Mother Nature has in offer. I had a good night’s sleep, despite it not really gettig dark at night. The alarm went off ridiculously early (at 3:15 AM I think) in order to be up before sunrise, one of the drawbacks of summer photography. But when peeking out of the tent it was immediately clear that the haze had disappeared, and had been replaced by an inversion. Now that was an incentive to get dressed real quick! 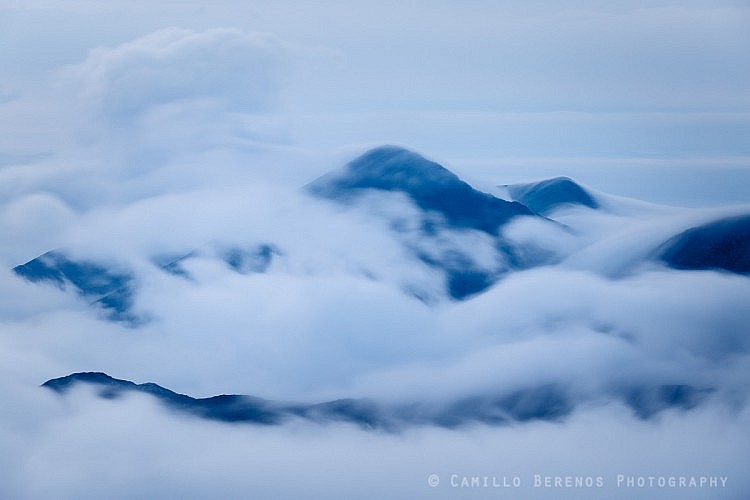 A bit of semi-abstracty fun: Sgurr Mor almost encapsulated by clouds and an inversion 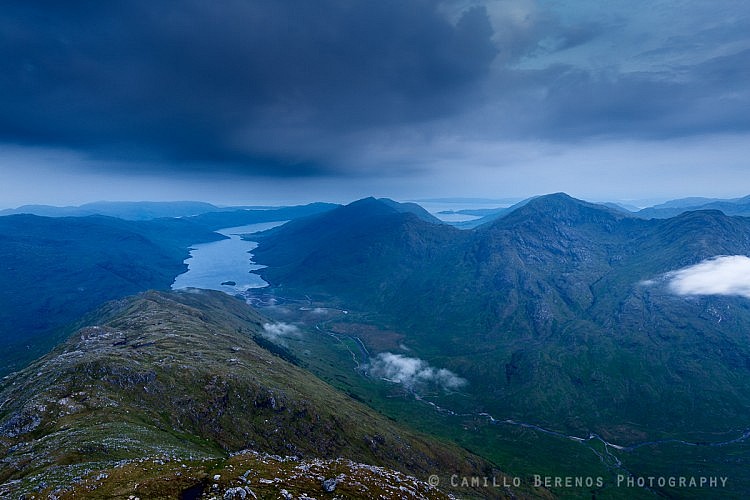 The wilderness of North Morar and Knoydart at dawn with some low hanging clouds blown in from the sea. 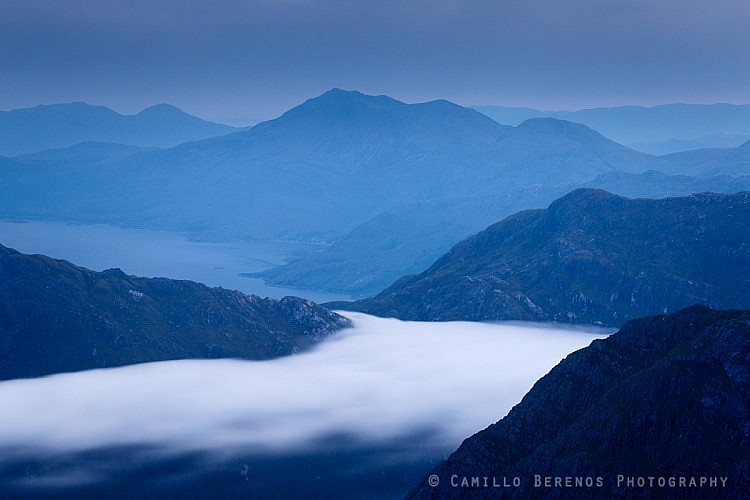 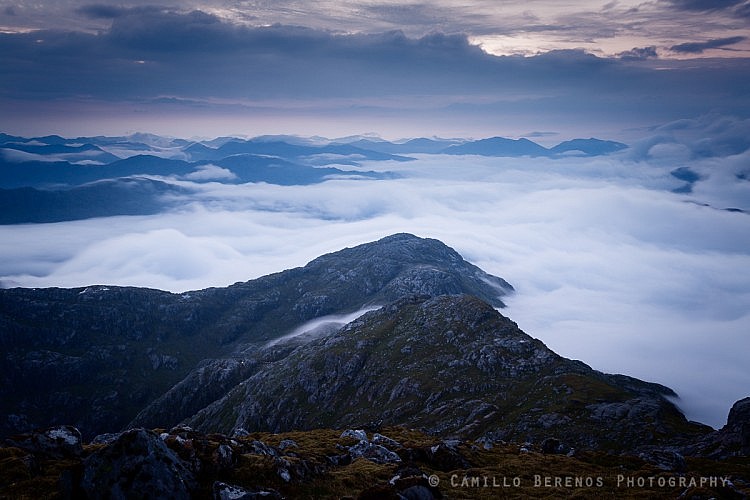 An inversion seen from Sgurr na Ciche with Loch Quoich completely disappeared underneath the clouds. 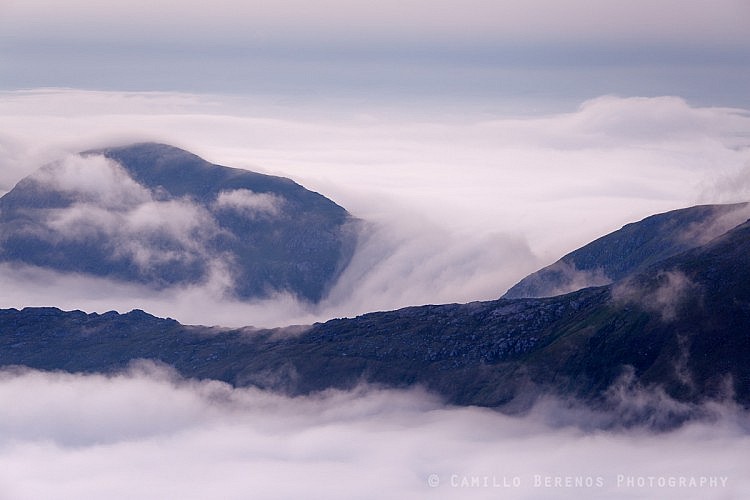 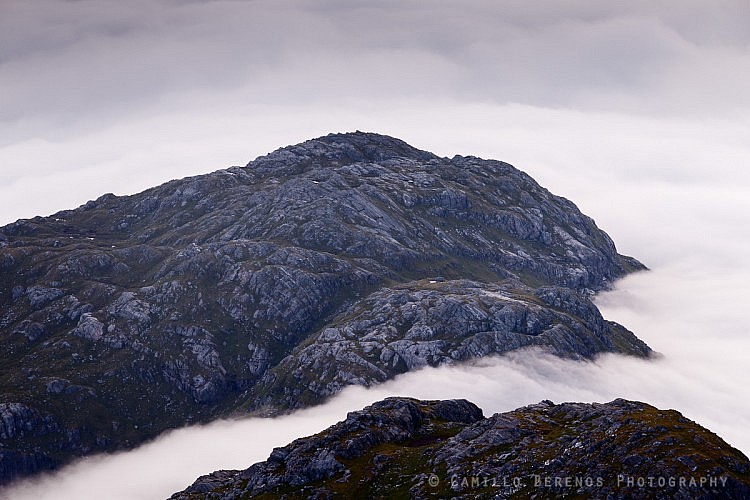 More abstracty minimalist fun. It’s really hard to tell the scale of this. 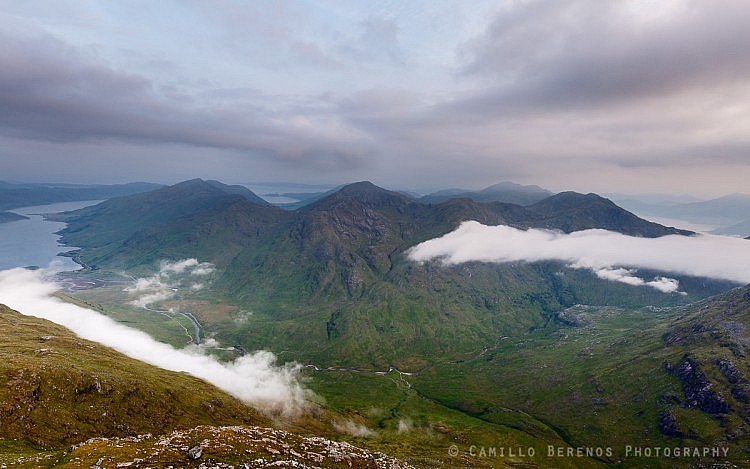 A classic wide-angle vista shot, not proud of it but it has to be done. Overlooking the rugged mountains of the Knoydart peninsula at dawn

While sunrise was not in-your-face-amazeballs as the sun never really pierced through the clouds, it was a great experience watching the inversion ebb and flow over the mountains in the wild part of the Scottish Highlands. It was with sadness that I eventually took down the tent and packed my rucksack and set off on my way back. It didn’t take long before I entered the clouds, which should be a part of any Highland mountain trip if you ask me. Down in the glen I spoke to a couple of walkers who were doing the Cape Wrath trail, what a heroic effort that must be, not in the least because their life was made a living hell by the highland beasties (midges) while camping in the glen! One day I must find the time to set off on such a long-distance hike!

In summary, a great wee trip with some stupendous views and a great taster of what Knoydart must be like. Hopefully it won’t be long now before I’ll be able to cross a couple of hills on the peninsula off my tick list!

My Kozu landscape Editions book can be purchased from the publisher’s website.