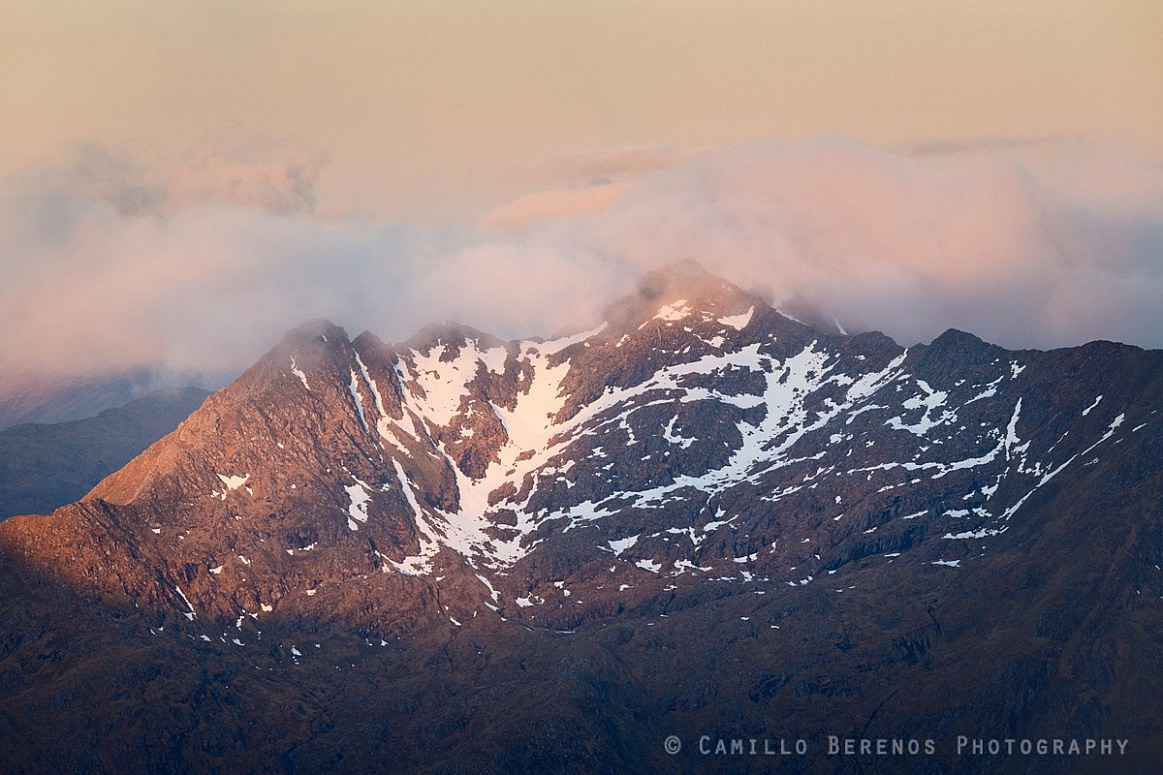 I had been eyeing the walk over the Five Sisters of Kintail for some time now, but due to a variety of reasons it never materialised. I had hoped to do it in winter, ever since admiring the imposing ridge while camping on the South Shiel ridge in winter, but there were few decent weather windows. But a few months ago now, it finally happened. The weather finally looked suitable for a pleasant high level camp, and to make things even better, I joined forces with my buddy Sven (a local mountain photographer who has been producing some outstanding work over the last few years).

As the walk over the Five Sisters of Kintail is basically a long ridegewalk, there was no easy way to make it circular, but the plan was to do it from east to west, with a camp on Sgurr Fhuaran. And the great thing of teaming up was that (besides the obvious improvement in conversational opportunities, and less need to scout my own compositions as I would just follow Sven every step he took) was that we could leave one car at either end, saving a long walk back along the road.

There was no easing into it, as the walk went straight uphill right from the start. While steep, we reached Bealach an Lapain rather swiftly as we were chatting happily. Based on walk descriptions and the map I thought that we would have the hard part behind us viagra france 5. But this turned out to be wrong as the rest of the walk involved some hefty ascents and descents. I love a good physical challenge, so while demanding for the cardio-vascular system, it was great fun. It certainly helped that the views over Kintail, Glen Shiel and even Torridon were outstanding!

We arrived at the summit of Sgurr Fhuaran with a couple of hours to spare before sunset. We cooked some dinner while chatting and listening to the sound of a cuckoo call far below us in the glen. The summit had ample room for tents, as there were many grass-covered spots around. We pitched right next to the cliffs on the north-eastern side of the mountain, which were probably a few hundred meter high. Not a great idea if you’re sleepwalking I guess!

The clouds that had been around all day did their typical thing of almost disappearing just before the golden hour. That’s the beauty of landscape photography though, one can’t predict the conditions, so improvisation is a must. Regardless, while not uber-dramatic, light quality was generally pretty decent and I think we got more than a few keepers each. 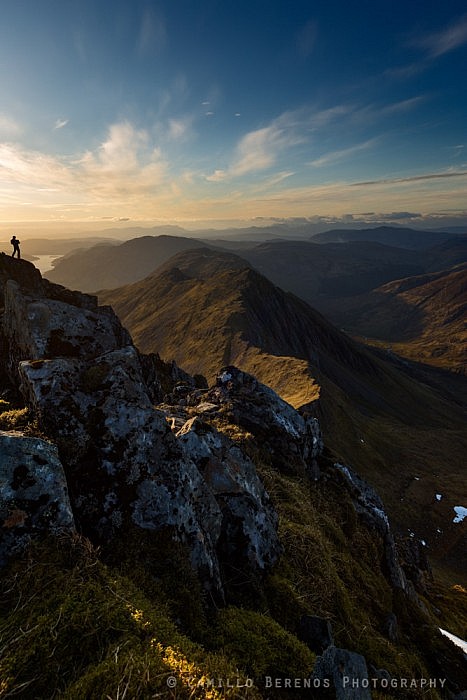 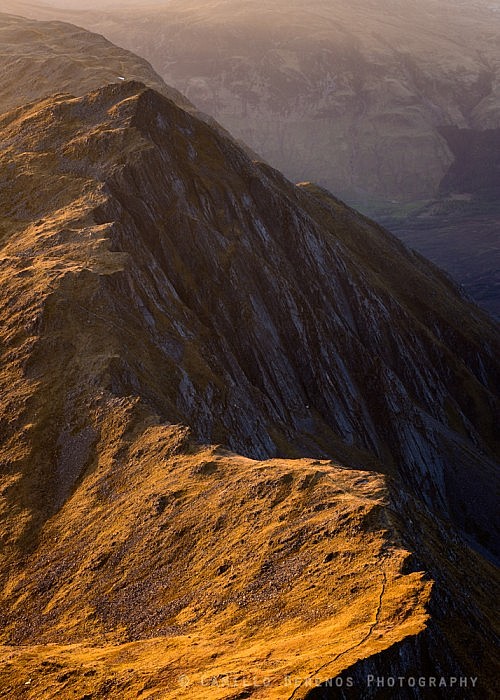 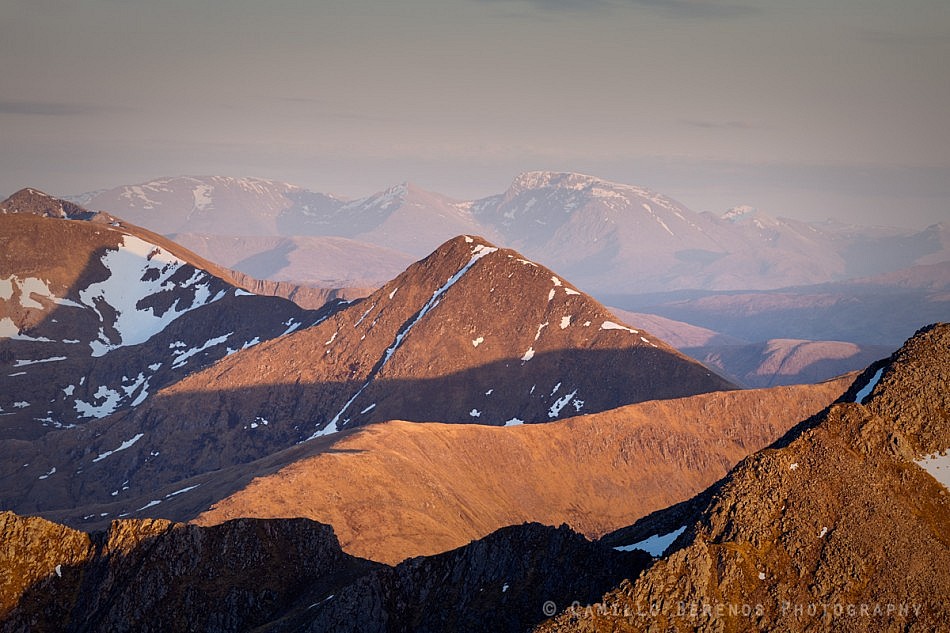 Interplay between light and shadow on Sgurr an Lochain at sunset 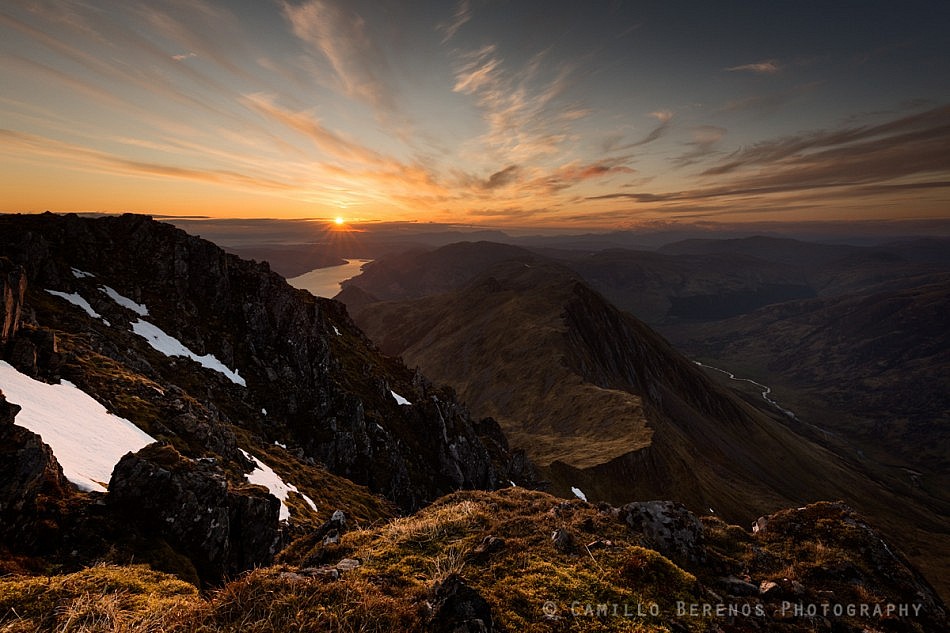 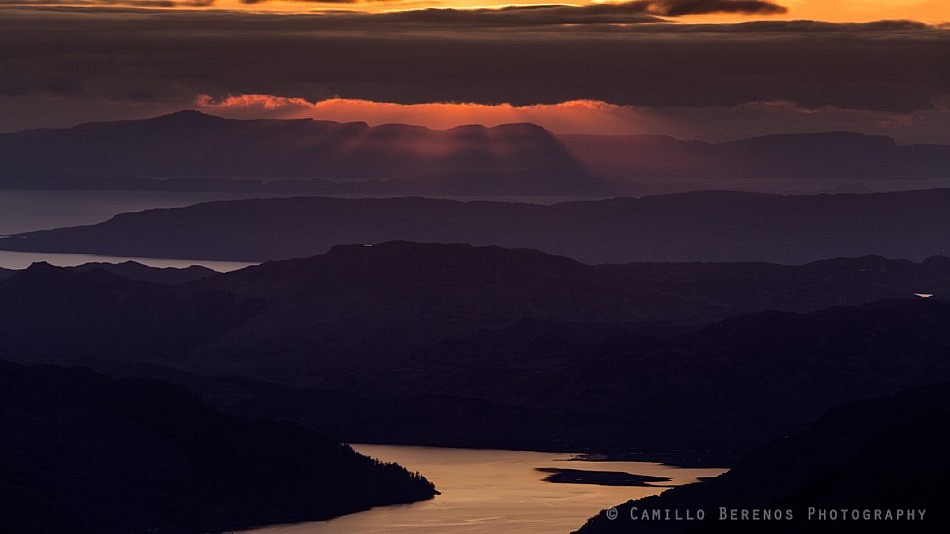 Sunset soon gave way to the twilight, my favourite time of day for photography. Strong magenta hues dominated, which is a bit of an acquired taste for some, but I quite liked it. 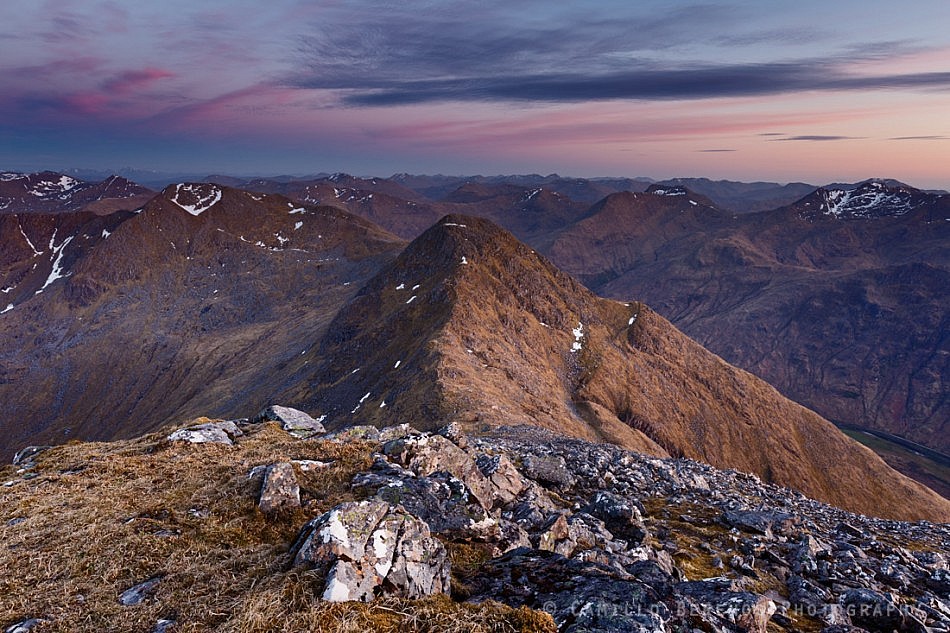 Looking back at the way we came: Sgurr na Carnach with the South Shiel ridge beyond at twilight.

Despite summer solstice being more than a month and a half away, the night was surprisingly short. We set the alarms at 4:30 AM in order to photograph the sunrise. When I had a quick peek out of the tent there was no cloud to be seen anywhere, which is a bit of a double-edged swords for photographers. Cloud coverage is never ideal for our pesky grumpy kind 🙂 However, clouds soon came rolling in from the west coast, and by the time we had taken down the tent and were ready to start walking, visibility had disappeared completely. However, in the time between, conditions were often sublime. We had to react instantaneously based on changing conditions, but that’s what makes Scotland (mostly) such a fun place to photograph. 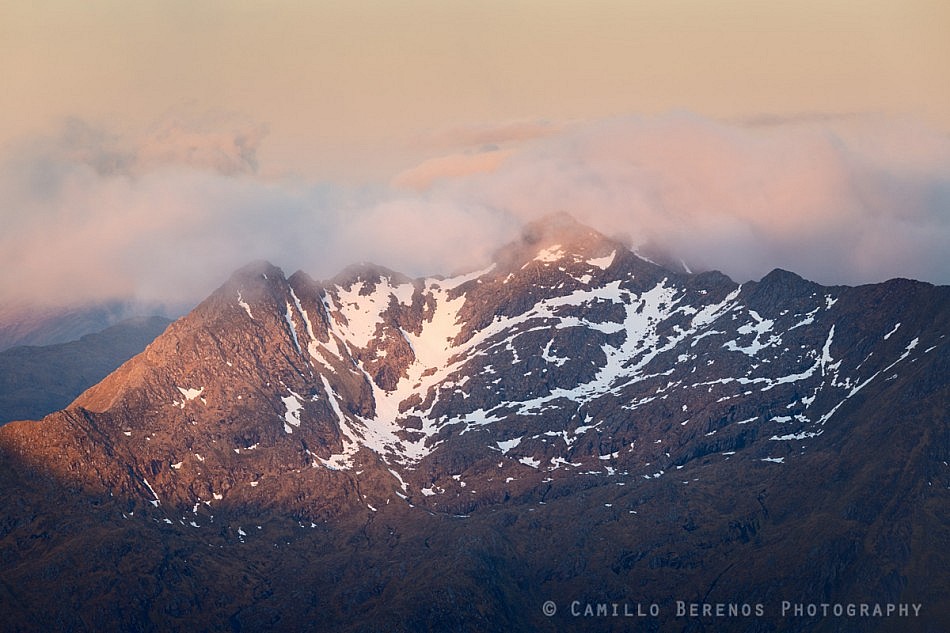 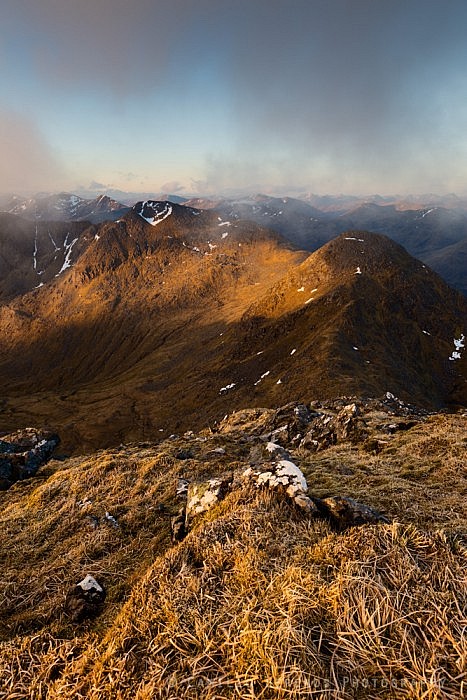 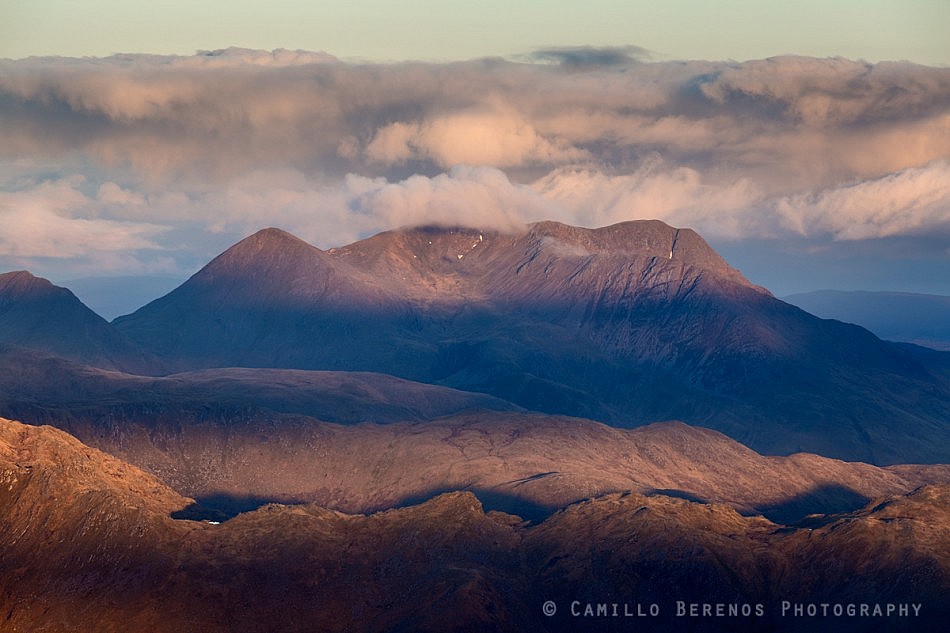 Clouds over Beinn Sgritheall at sunrise 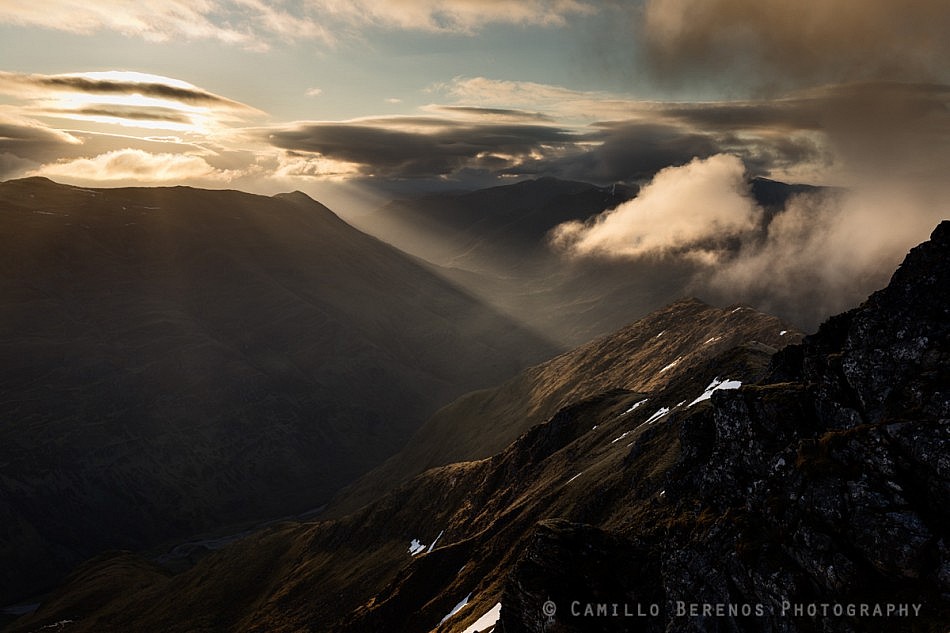 A sunbeam illuminating Gleann Lichd through the clouds over Beinn Fhada 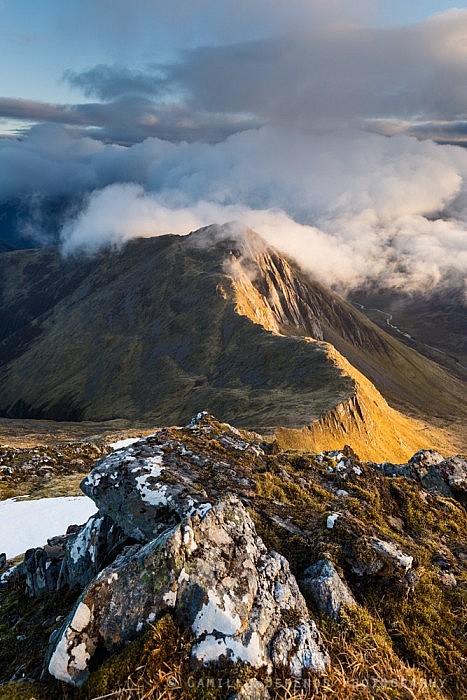 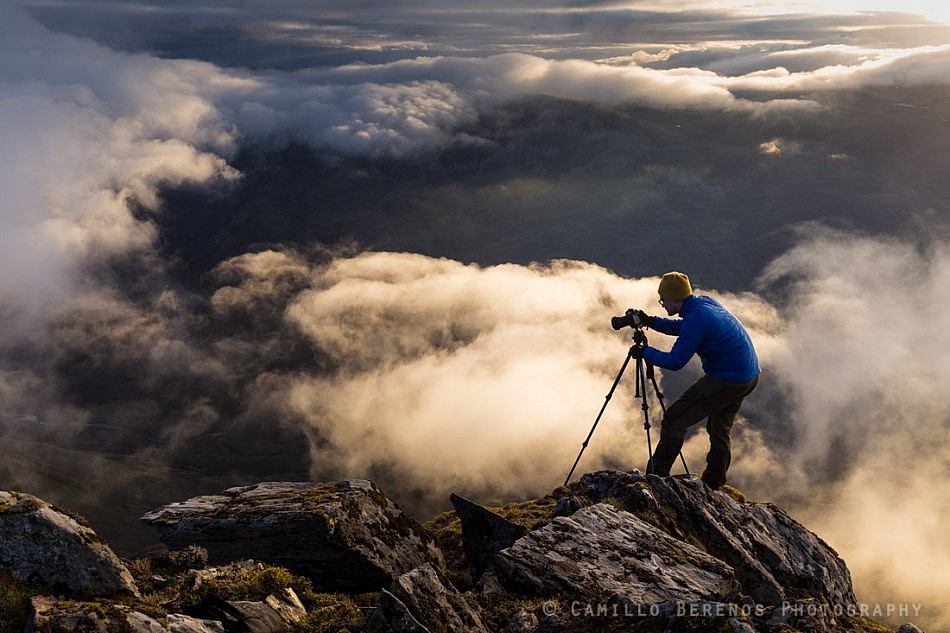 Sven setting up for his shot above the clouds on a steep cliff in the Scottish Highlands (Sgurr Fhuaran, Five Sisters of Kintail)

The walk to Alt a’ Chruinn was deceptively long still, even though we didn’t include the fifth sister (Beinn Bhuidhe) due to the deteriorating weather, but as it was mostly downhill it was a lot less punishing than the day before. All in all, it was a great ridge walk, with some of the fines views found anywhere in Scotland, and it should be high on anyone’s wish list. Regardless, I was relieved to take off my boots, and glad that I had stocked up on energy drinks to keep me alert during the drive home.

My Kozu landscape Editions book can be purchased from the publisher’s website.