Why wild camping is so great for landscape photographers

There are few things better than being on the summit of a mountain, rising steep above the landscape of bogs and wilderness of the Highands of North-western Scotland during the golden hours around sunset and sunrise. I am particularly fond of Torridon, there is something magical about this place. The mountains are steep (probably an understatement, I’m not aware of any words which will do justice to the steepness of some of the slopes), interestingly shaped even from lower levels, and their ridges offer some of the most spectacular ridgewalks in the Scottish Highlands. Not so long ago, I had wild camped on the summit of Beinn Alligin and I thoroughly enjoyed the views over Beinn Dearg and Liathach after sunset during some truly atmospheric conditions, and I knew I had to come back to wild camp on one of the other Torridon “giants” to experience such views during the golden hours again. Wild camping on the summit or on high elevation ridges is an excellent means to go back home with landscape photographs taken during the classic golden hour spectacles, a time of day when most other hillwalkers are already off the hill or still htiiting the snooze button on their alarm clock. I’m not sure I’m courageous enough to do Liathach while carrying an overnight rucksack, so I gave backpacking Beinn Eighe a go when the weather forecast promised a decent chance of cloud free summits.

The route description can be found on Walkhighlands. It is a tough walk, and you’ve got to love some steep scree slopes if you’re doing this, but when on the ridge it’s all quickly forgotten. I made the ascent through Coire an Laoigh a bit more interesting by following something I thought was a path but which wasn’t for quite some time, until I realized that continuing was probably not going to end well. It meant losing 100m height, parts of it on my bum (yes, that’s how steep it was), only to have to regain it again.

Despite the weather forecast being very optimistic and promising excellent views, it was actually quite hazy. I decided that I wasn’t going to begrudge this, and thought I should use this to my advantage. I quite like shooting into the sun under such conditions. And here, I photographed a backlit Liathach from Coire nan Clach on Beinn Eighe. The haziness softened the light, and added some mystery to the layered slopes of Liathach. Also note that this wasn’t taken with an ultra-wide angle, such as many of my photographs! I took quite some willpower to put on my longer zoom lens, but it’s something I should do more often! 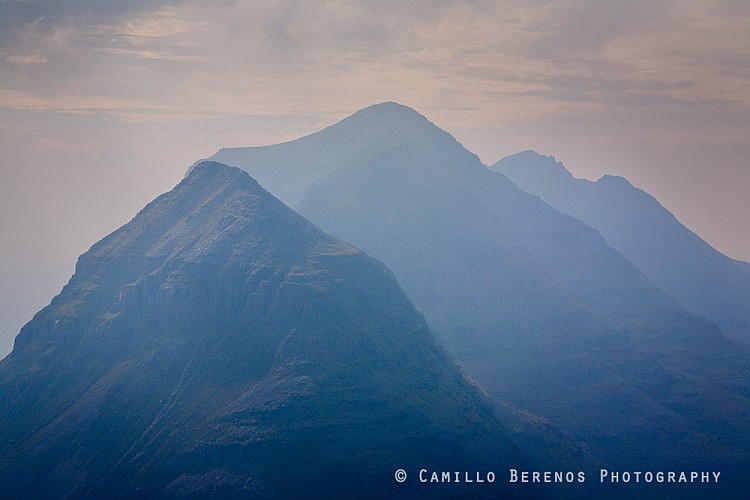 Behind the summit of Spidean Coire nan Clach there were some great views over the eastern summits of the Beinn Eighe summits. They sure look like they could be great fun, but they would not be included in this outing, so I should return to explore those beautiful ridges!

At more exactly the same spot behind Spidean Coire nan Clach, but facing the other direction, the views and conditions were very different to say the least. Liathach looks almost unscalable, rising very high above the ridge of Beinn Eighe, despite being a few kilometers away. The backlight and some breaks in the clouds created some really wonderful diagonal patterns in the hazy sky. 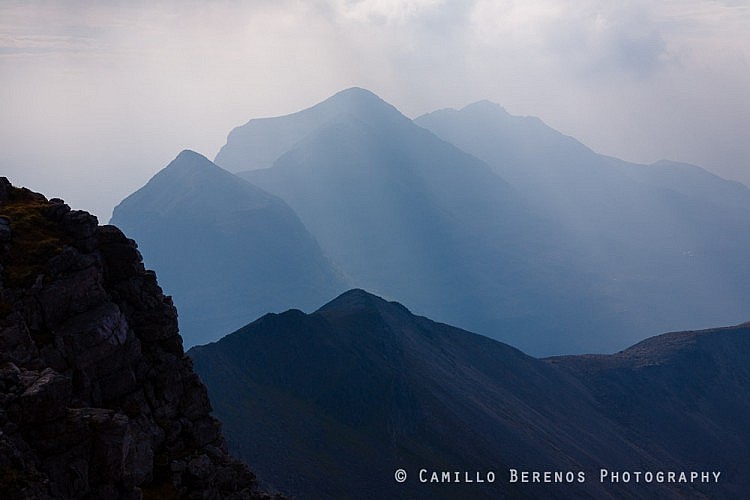 On my way to Ruadh-stac Mhor, the highest point of the walk and the second Munro summit, I admired the views off the ridge as much as possible. Mostly I tried not to tuirn my ankle for the zillionth time, and to avoid being killed by the weight of my rucksack, but yes, there were moments were I just let the views sink in. Moment such as this one. The main reason for wild camping is to photograph sunrise or sunset, but sometimes the most spectacular condition happen during the presumably “boring” midday conditions! This view would have been great even without that cloud, but that dark cloud above Liathach really  this composition gave this composition that extra “oomph”. I thought that a black and white white conversions would do this photograph mote justice than leaving it in colourd by really drawing attention to the cloud mirroring the shape of Liathach. 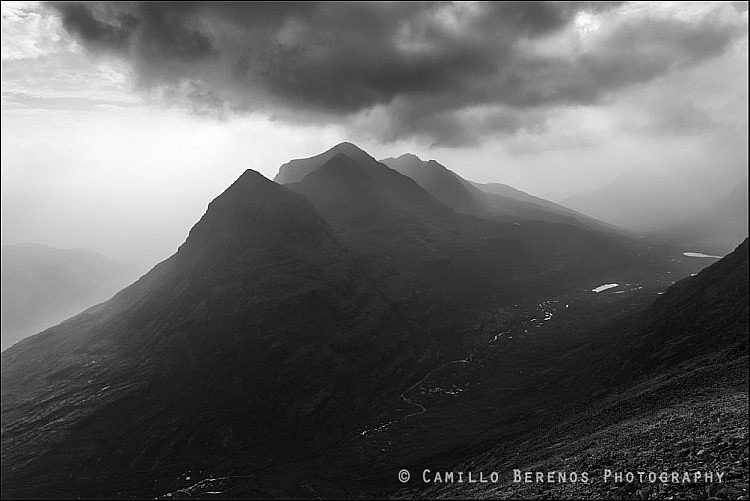 Mount Doom, or Liathach with a cloud brooding above it’s summits in black and white

I am not a great fan of panoramas, but at this point I really wanted to record the view which unfolded before me. A view that even an ultra-wide angle could not capture in its entirety. Hence I opted for my second panorama of this trip, showing Liathach and Beinn Eighe separated by a narrow valley! That valley is where the walk would bring me on the walk back to the car! Anyway, if you look carefully you can see the trail on the ridge of Beinn Eighe which I would be following.

Liathach and Coinneach Mor seen from the ridge of Beinn Eighe.

The golden hour was approaching

I continued the walk towards Ruadh-stac Mhor, keeping my eyes open for possible pitches and good photo opportunities for sunset.  The view on Ruadh-stac Mhor were a bit disappointing, also because of the clouds rolling in, so I decided to walk back towards Coinneach Mhor. There was a lot of grass there, which promised a comfortable night! Also, it looked like it could be a great place to shoot sunset from, giving that Liathach wasn’t far away. 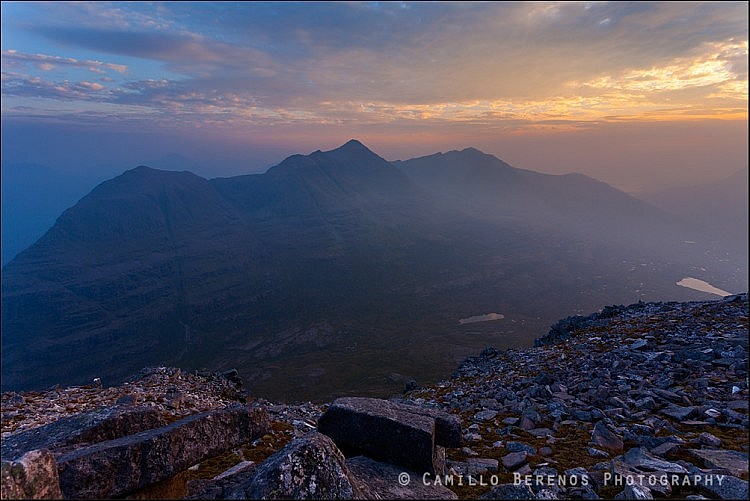 Again, the hazy light made for some more abstract photographs, as inevitably details get lost when shooting against the sun. Nevertheless, this can lead to some very moody pictures. Here I like how mountain after mountain unfolds itself, with a sky which is about to be set on fire. 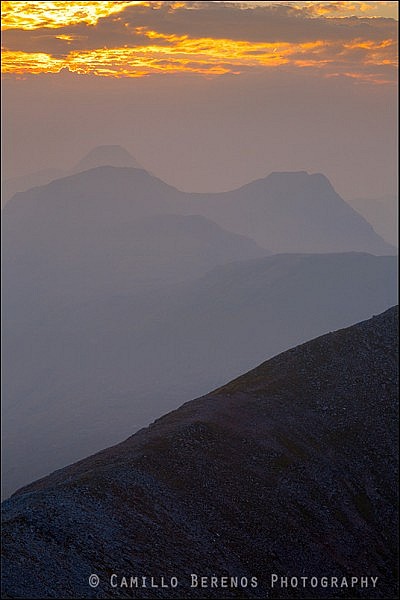 Sunset happened so quickly! I blinked and the sun was gone! All of a sudden the blue hour was there. Nevermind, I like the  blue hour light more anyway. Here many of the great hills in Torridon can be seen behind Sail Mhor and  Lochan Coire Mhic Fhearchair on the right of it.

I quite liked the subtle reflection in Lochan Coire Mhic Fhearchair, in between Sail Mhor and the Triple Buttress. What beautiful colours appeared in the cloud formations! 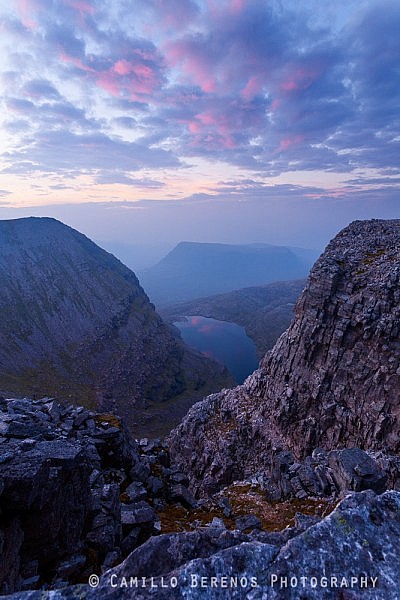 Yes, I do have an obsession with Liathach! How can I not photograph it! The purple and blue tones were just marvellous, and that little bit of fog around its base on the left just added that extra touch! 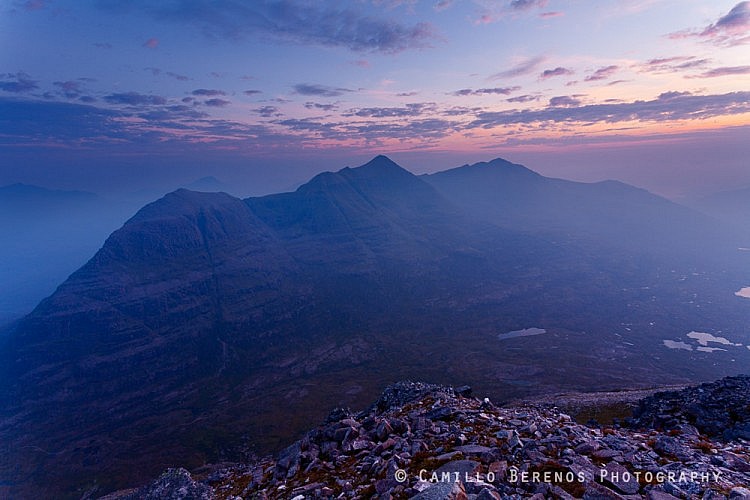 Liathach in the blue hour after sunset

Okay, last photograph of Liathach, I promise! Ever? No of course not, silly! But it’s the last photograph taken that day. Luckily it was only a short stroll back to the tent, wild camping definitely has something going for it doesn’t it? I sat around the tent and stretched my tired old legs while watching the many red deer on the grassy slopes of Coinneach Mhor and hoping for some stars or even better, the aurora. Unfortunately the clouds rolled in. The next morning at sunrise, the clouds were still there… 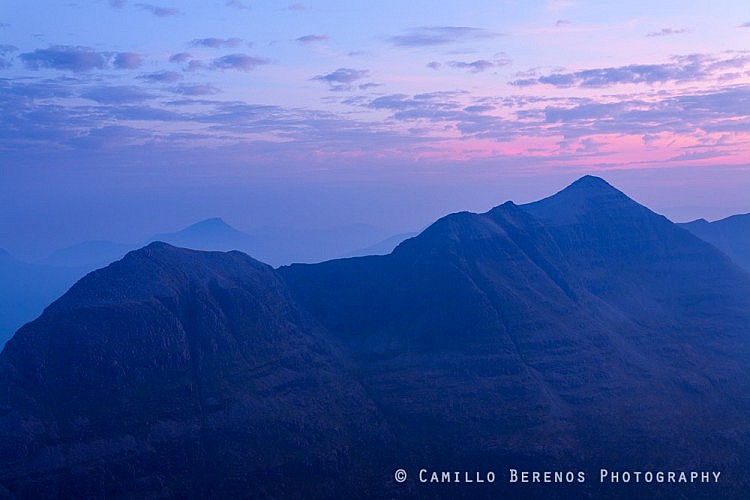 Close up of Liathach from Coinneach Mhor after sunset

The next morning my legs were certainly feeling a bit suboptimal, and I was not entirely looking forward to the descent towards Coire Mhic Fhearchair, as that involved some steep scree slopes. Not a problem under normal conditions, but with tired legs and a heavy bulky rucksack things get a it more unpredictable… I am glad to report that the scree was not so bad. I could not resist shooting this reflection of Coinneach Mhor and the Triple Buttress in Lochan Coire Mhic Fhearchair, despite the relative flat lighting and misty conditions. 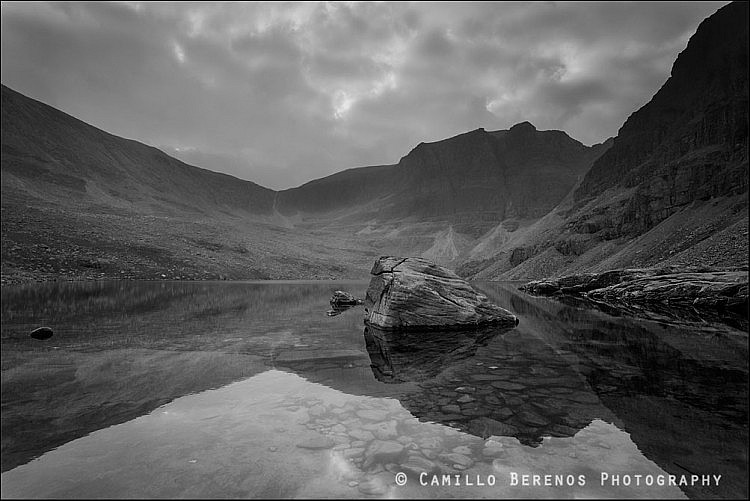 After Lochan Coire Mhic Fhearchair it was a relatively straightforward 2 hour walk back to the car park and a well deserved moment of happiness when the boots were taken off.