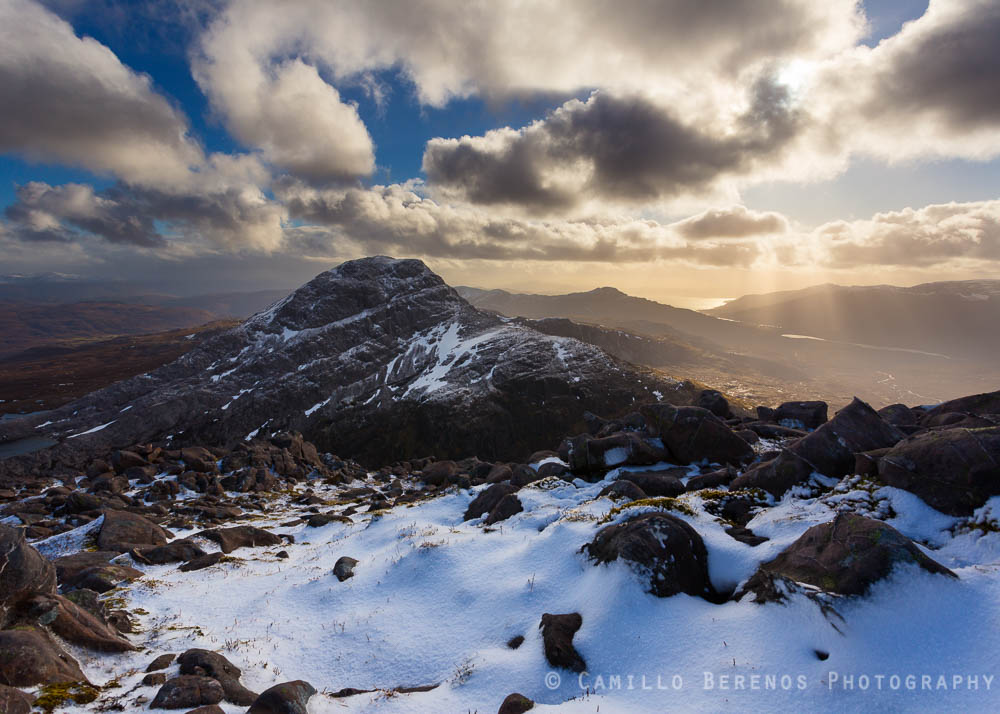 I have been eyeing the mountain weather forecast for much of February and early March as I was keen to do some high level walks in the Scottish Highlands, but alas. Storms, low hanging clouds or blizzards dominated the forecasts whenever there was even the slightest possibility for me to escape for a day (or two). While I am far from a fair weather walker, photography is as important to me than bagging a summit,  and thus it makes no sense to drive and walk great distances if the chances of coming home with portfolio-worthy images are slim.
Recently however, it looked like the weather would settle in the north-west Highlands, if only for a day or so, but that was enough for me to make a impromptu trip to Torridon happen. Settled weather of course does not (necessarily) mean good weather in Scotland, as 40 mph winds were still forecasted, and it was clear that there would be frequent showers, but it was promised hat visibility would be decent between the downpours and blizzards. Wild camping on the summit would unfortunately be out of the question as there would be 70+ mph winds in the evening and a night, so I was hoping for some nice light during normal hillwalking hours 🙂

There are so many beautiful hills to choose from in Scotland, which can make planning a trip a nightmare for indecisive people like me. That’s why I have mainly been focusing on Torridon and Inverpolly over the last year. It’s a bit of a drive, and there are definitely beautiful hills nearer to Edinburgh, but I find that it’s probably best to build up a larger portfolio of images from a few core areas instead of taking photos of random and unconnected hills. It’s not like it’s a chore anyway, as Torridon is home to some of the most magnificent mountains in Scotland anyway.

I didn’t fancy doing Liathach (the only Torridon giant which I haven’t done yet) solo in winter, and some of the hills to the north of the giants would be problematic to access as the rivers would be in spate. I instead opted for Maol Chean-dearg, a Munro in between Loch Torridon and Loch Carron. I did the usual route (description can be found here), which turned out to be a fine walk, and the crampons surprisingly stayed in the rucksack. During the walk in there were heavy showers which turned into wintry showers higher up, but the weather and visibility improved when I reached the bealach at a Choire Garbh. Of course, on the summit I still had to sit out a few wintry showers but it was all worth it. The best light is usually found in breaks in inclement weather.

Below are a few photos taken on this trip. The wind was still very strong on the summit, and I feared that sharpness of a lot of photographs would be affected by the gusts, so I did something I usually never do: I shot at ISO 200! I the end my fears were partly unfounded, as the majority of photos were tack-sharp.

The views north from Maol Chean-dearg are stunning. The majestic Torridon mountains are all visible, but it is really Beinn Damh (prominently visible in the photo below) which steals the show. Beinn Damh falls just short of deserving “Munro” status, but it looks like it could be a very fine mountain. The snow higher up make it look even more imposing.

There’s no better light than afternoon storm light. There were blizzards almost everywhere when taking this photo, just not on Maol Chean-dearg and Beinn Damh, which created this incredibly moody sky. The patches of light on Beinn Damh were just enough to make this image pop. 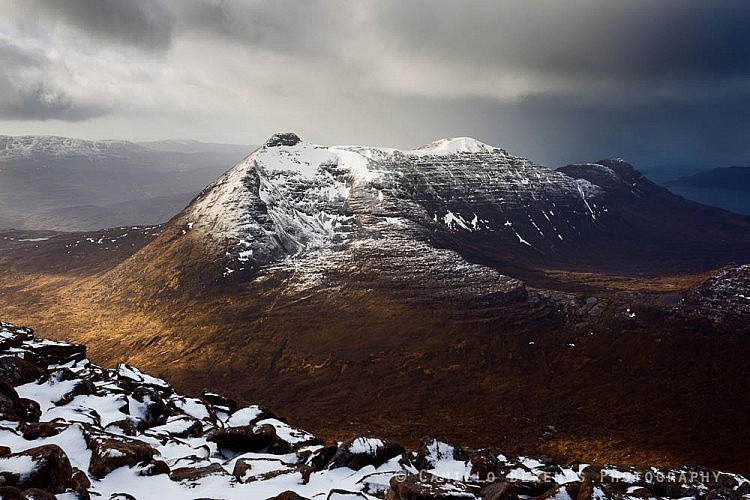 When being presented with epic views like here in Torridon it’s easy to only photograph the epic vistas. I have to keep forcing myself to use my longer lenses, otherwise that’d be exactly what I’d do. Here I waited until this brighter clouds was sitting just above one of the peaks on the ridge of Beinn Eighe. Not an instant crowd-pleaser I don’t think, but I quite liked how the cloud almost mirrored the shape of the ridge. 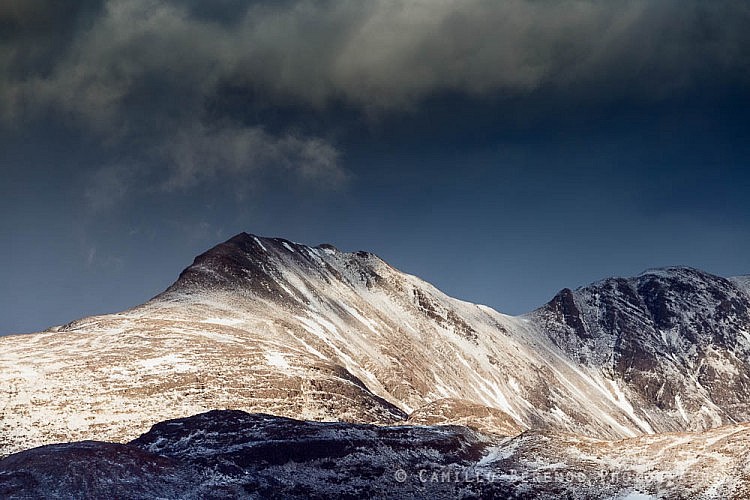 That being said, I’m still a wide-angle junkie, so back to the epic vista it was! While most of the Liathach ridge was cloud-free here, Beinn Alligin and Beinn Dearg really got a hammering by the weather here. The two stumps in the foreground are Beinn na-h Eaglaise and Meall Dearg. 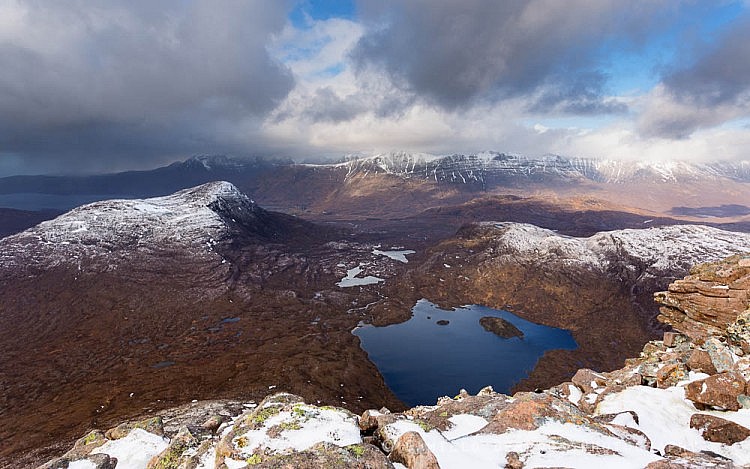 I don’t usually take pictures with clear signs of civilization, but I found that Torridon village with that spectacular backdrop deserved to be an exception to my self-imposed rules. The horns of Beinn Alligin and Beinn dearg can be seen behind the slopes of Liathach. Note my usage of a long lens again 🙂 Before you know it I’m no longer a one trick pony! 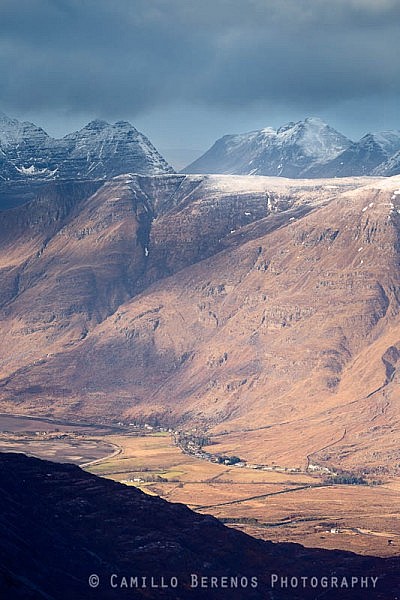 While I could have stayed on the summit for much longer, waiting for better conditions, it started to get a bit late and I really should get going if I’d want to get back to the car before dark. Being a resposible hill-walker I carried my head-torch, but when all alone on a mountain, it’s sometimes best not to take too may risks. On my way back, the views over An Ruadh-stac could not be ignored and I spent less time choosing a line of descent and thinking about where to place my feet than I should, as it surely looked impressive. I wanted to get a nice snowy foreground leading ito the frame, and waited a little for some nice light. I didn’t have to wait long for some pleasing crepescular rays. 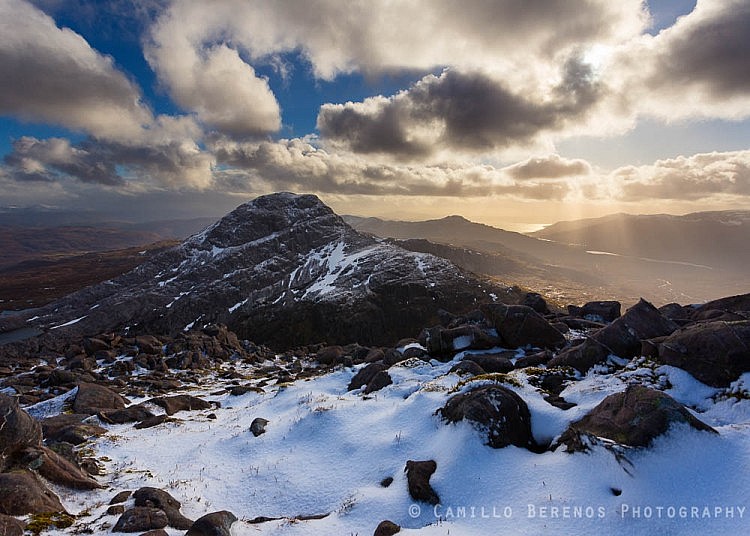 While most of my recent mountain photography has been done while wild camping, an approach which undoubtedly leads to more opportunities for good light around sunset and sunrise, this walk has taught me that it’s okay to just go on a day trip too! The light can be great any time of day, which is especially so in winter. The added benefits of single day walks are that my pack was much lighter, and that I could squeeze two walks into a time frame normally needed for one wild camping walk!
If you’d like to see more of my photographs of mountainous scenery of the Scottish Highlands, please click here.