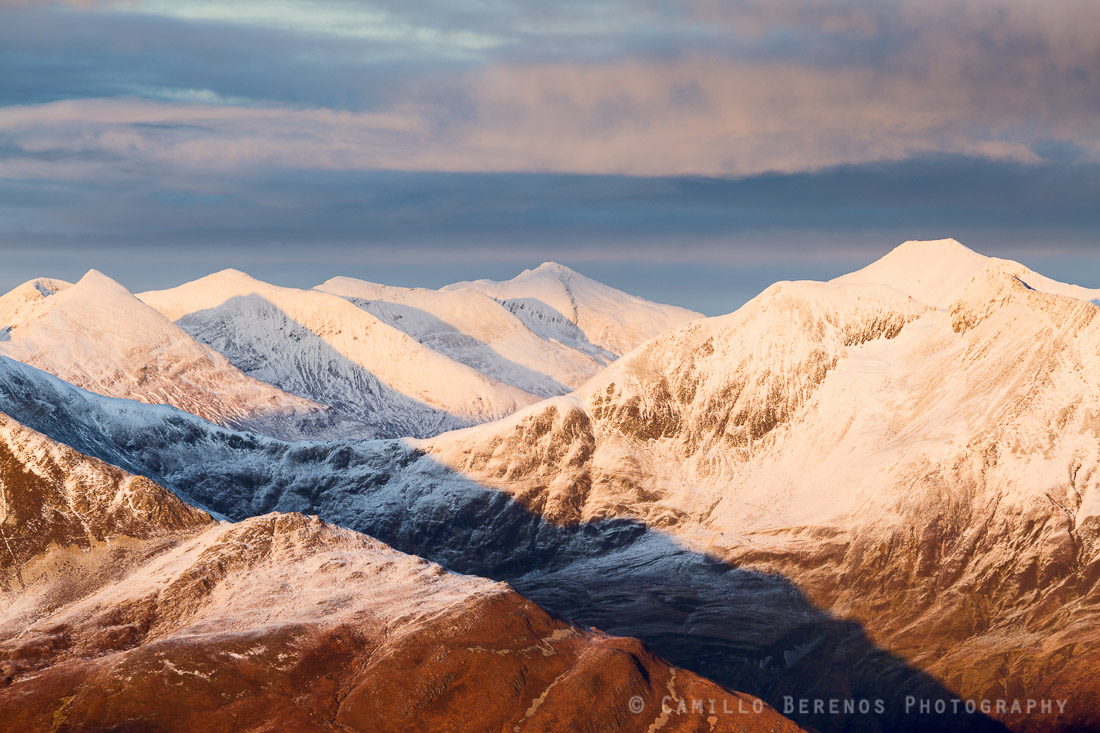 A little while ago, the first proper snow of the season has arrived to the Scottish hills and mountains. Needless to say, I, along with many other photographers and outdoor enthusiasts alike, headed to the hills at the earliest opportunity. I “only” had a day to play with, so wild camping was off the table. Instead, to make life easier, I opted for some hills relatively close to home, and for which no walk-in was required so that no long walks were needed in the dark (I don’t know about you, but route finding in the dark can be rather challenging). For sunrise I went up Beinn a’Chrulaiste, and later in the day I went up Sgorr nam Fiannaidh, the westernmost Munro summit of the illustrious Aonach Eagach.
I had gone up Beinn a’Chrulaiste at the start of the year, which made it a lot easier to navigate up the hill. And after a short but strenuous walk I reached the top of Stob Beinn a’Chrulaiste which would be the end point of this walk. The views over Stob Dearg (Buachaille Etive Mor) are out of this world, but I had already taken just short of a million photos of this iconic mountain during my last visit, so I decided to explore some other options. Lately I have been really enjoying using my 70-200 lens to isolate parts of mountains rather than (only) using my wide-angle to capture that grand vista, and this was no different today. I think that by forcing myself to “see” through a longer lens I don’t get stuck in just capturing what unfolds before me, but challenges me to actively look for compositions, thus sidestepping falling into the trap of capturing the low-hanging fruit photographs which have been taken countless times before. It doesn’t always works of course, but it’s at least something to aim for! 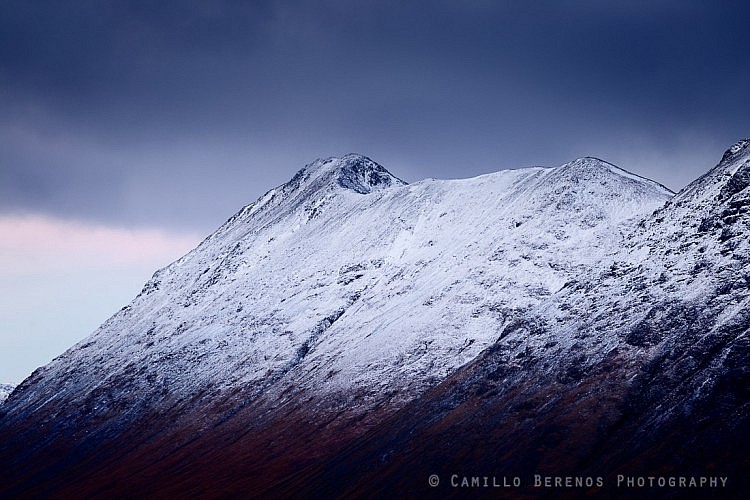 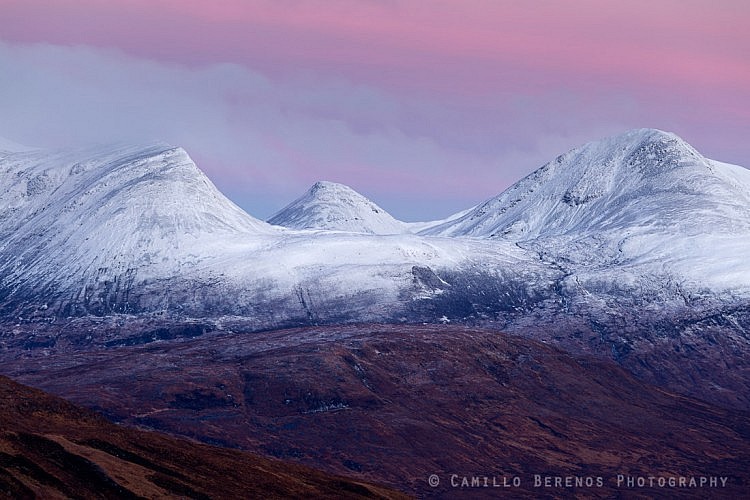 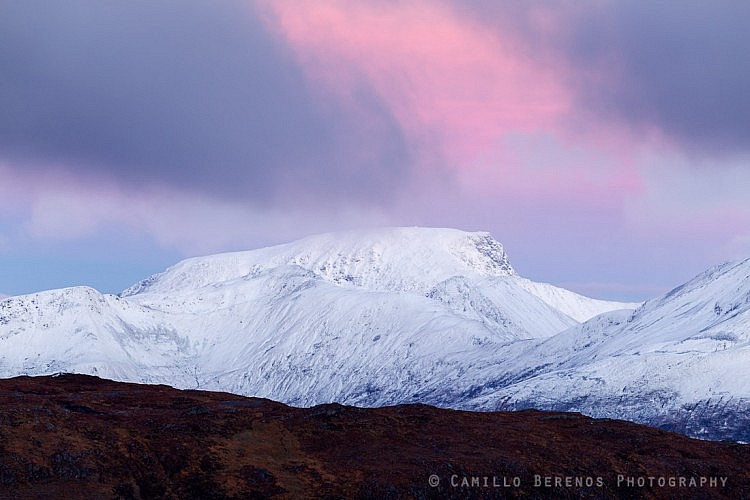 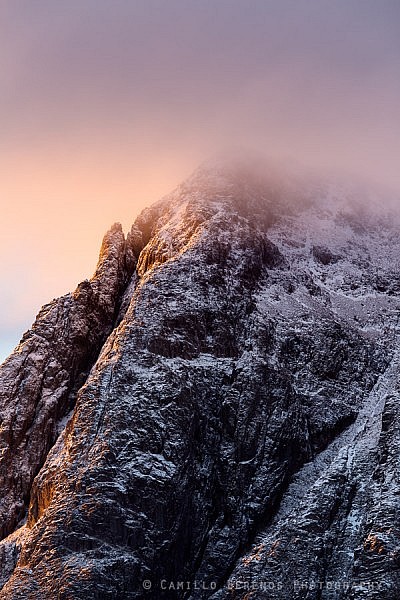 Next on the agenda was Sgorr nam Fiannaidh. It is usually climbed together with Meall Dearg, as part of a traverse of the fabled Aonach Eagach ridge. I am not sure if I’ll ever be brave enough to scramble that ridge, so doing the summits one by one will perhaps have to do for me. And what better way to do that than tackling them in their winter coat?

The ascent is mostly uneventful, though the fact that the path had been transformed into a cascade of monstrous proportions added some needed spice to it. Starting at 600m elevation I reached the snow level, but it was mostly very fresh soft snow, so the crampons and ice-axe remained unused. But the the views from the ridge are truly immense and the kilometer long walk along the ridge is pure magic, with the Aonach Eagach in full sight straight ahead, on the left the majestic ridges of the Mamore range and Ben Nevis, and on the right the Bidean nam Bian is looking frighteningly steep. Wow!

I had at least two hours to play before sunset, which gave me ample time to just sit, drink tea, and absorb the stellar views over my surroundings. Around an hour before sunset, I decided it was playtime, and got the camera out. 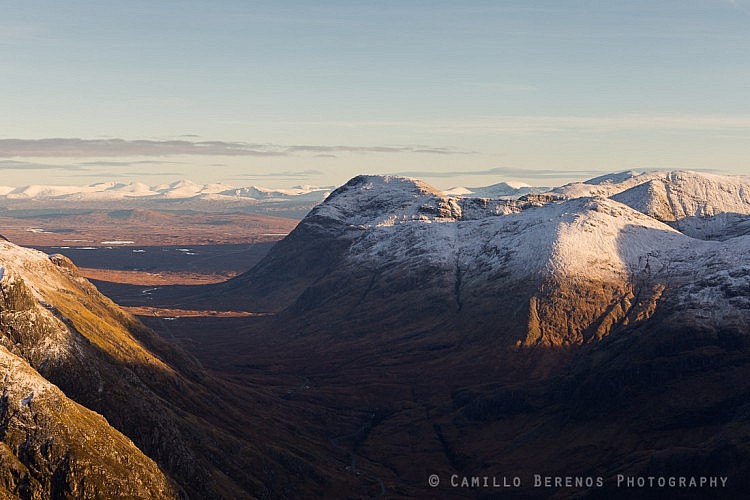 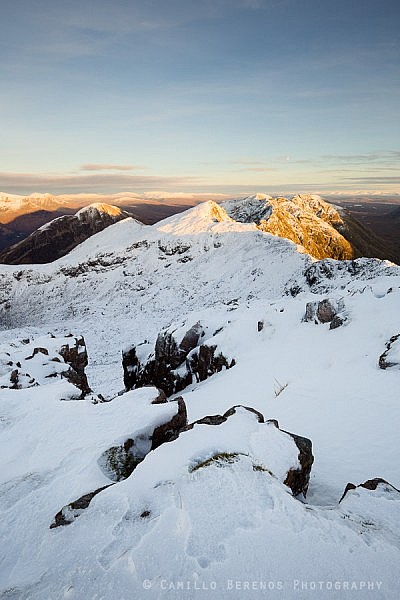 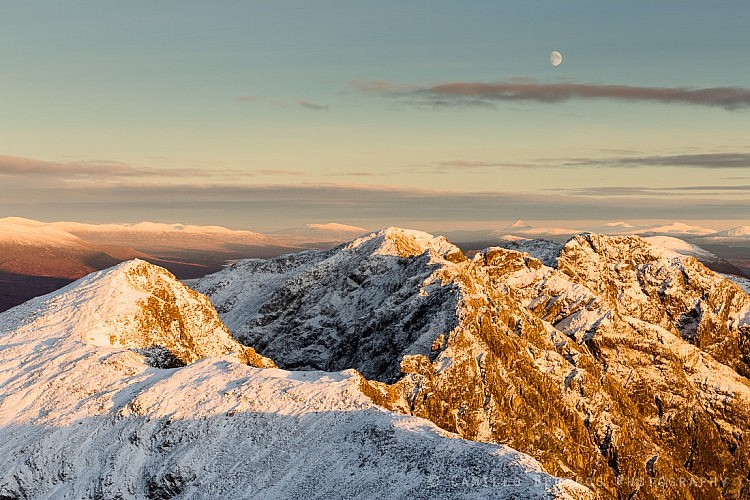 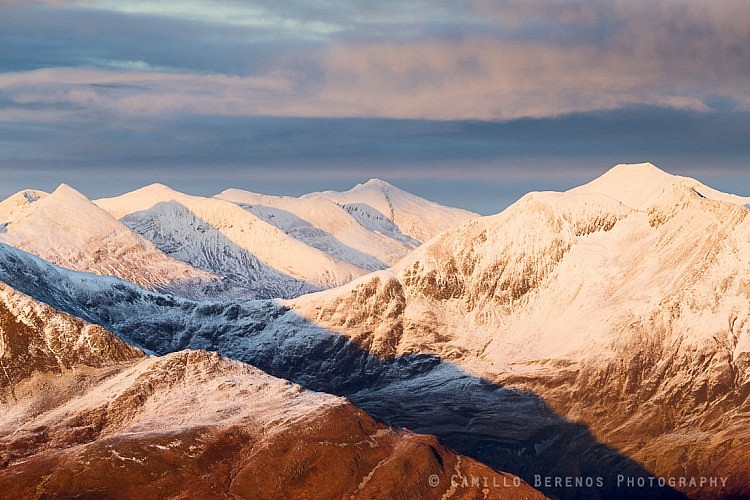 Despite the amazing views on Sgorr nam Fiannaidh, I decided to walk back along the ridge in the last bit of daylight to hopefully allow me to have a chance at completing the most treacherous and icy bits of the descent with at least some sort of visibility. However, the views from further along the ridge weren’t too shabby either. 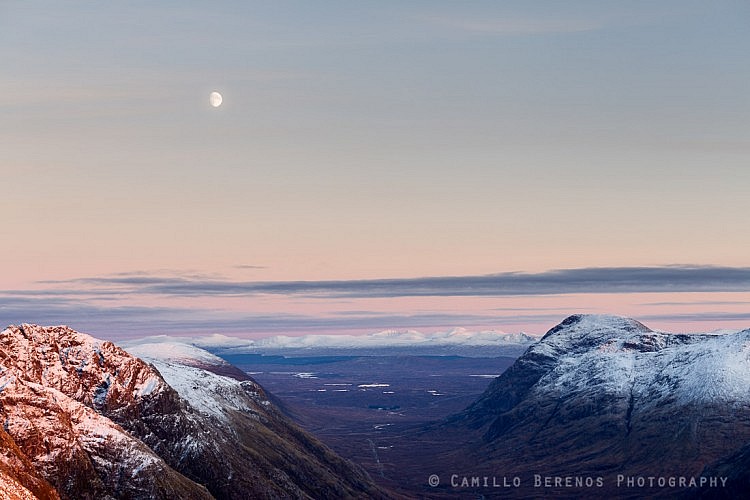 A rising moon above the vast landscape of Rannoch Moor. 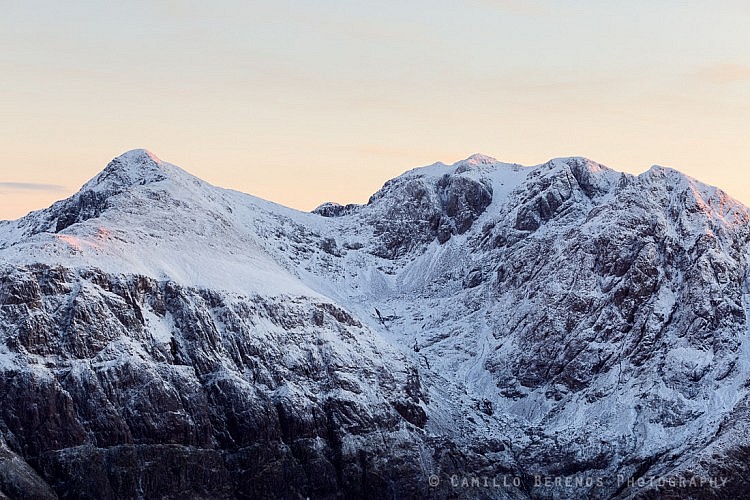 Stob Coire nan Lochan and the impressively shaped Bidean nam Bian massif in the last soft light of the day.

And as hoped, despite a bit of a detour, the head torch was only needed after reaching the path which would eventually take me down to Glen Coe. I bumped into a couple who were on their way down fro the pap of Glencoe. It turned out they were fellow photographers (who else plans their trips to the mountains such that they have to descend in the dark?) known as Angie and David Unsworth. They told me they had only taken their baby camera out that day (a Hasselblad) as they usually use a large format view camera! I guess I am never allowed to complain about the weight or bulk of my measly full frame camera gear again! But seriously, if you have not heard of them before, please make sure to check out their work, and be prepared to be amazed!

If you’ve not had enough, more photographs taken on this trip can be found in my recent work section and to see more photographs of mountainous scenery of the Scottish Highlands, please click here. Prints can be purchased here.