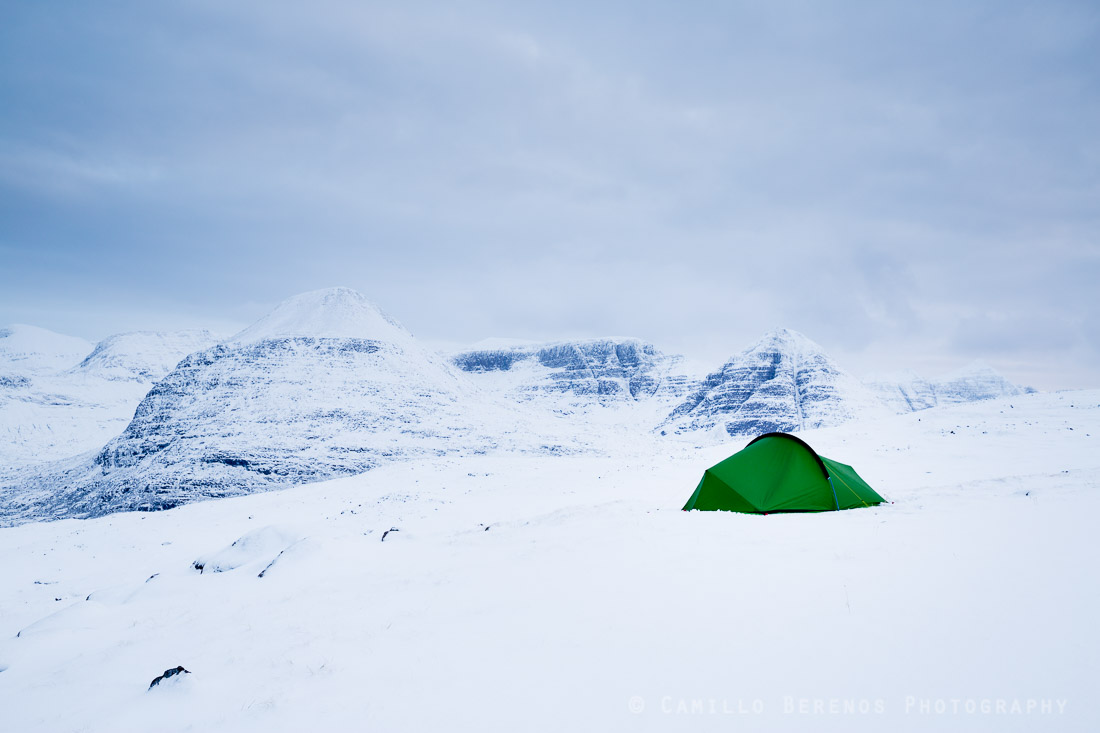 A high level winter camp had been on my mind for quite a while, but for a variety of reasons I never found time or courage to do it. I’ve been afraid that my gear wasn’t capable of dealing with camping in snow in negative figures and I was a bit put off by the very long nights (at this time of year there’s more than 17 hours between sunset and sunrise). The first excuse I had made was easy to deal with: I recently purchased a new sleeping bag (a Mammut Winter Sphere UL 750, a quality bag with 700 grams of 850+ down) and sleeping pad (a Therma-rest Neoair Xtherm). The second point was a bit more difficult to deal with, but I decided that the potential for boredom is easily offset by the potential for spending more time on the mountain, thus making it statistically more likely to come home with a few keepers.

But of course, being prepared for a winter camp is the easy part. Waiting for a window of acceptable weather was the hard part, but patience is a virtue and I eventually found myself deciding that the weather forecast was finally optimistic enough to justify packing my rucksack and head North.

And North meant Torridon. Again. Yes, I’d be the first to admit I have a Torridon problem. But in my defense, I have actually spent some time exploring other regions too last year. But I don’t think that anyone with a Torridon problem should need to defend him or herself: it is just a mighty fine region with many mighty fine hills.

So Torridon it was. To keep things (almost) fresh I decided to head up a hill I hadn’t climbed before, but based on the OS maps there should be a decent amount of photographic potential.

Of course, the weather forecast lied. Or so I thought initially. While I had some views when I set off on my walk, the clouds soon swallowed the hilltops, and the rain followed not much later. 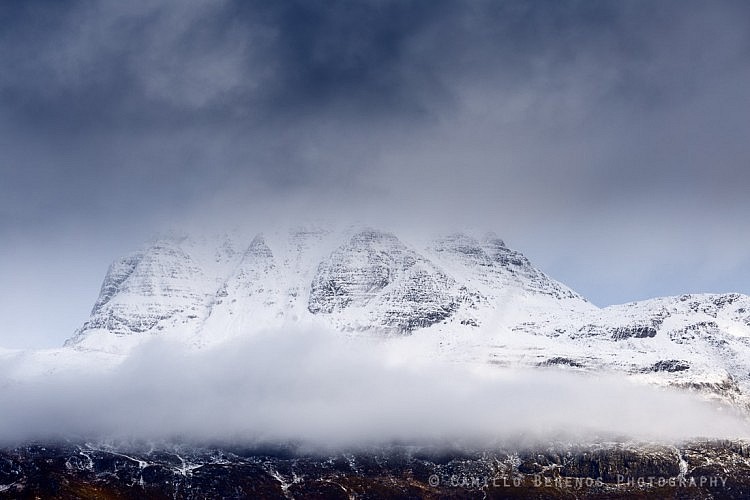 Looking back this was the last I saw of Slioch for at least a good few hours.

Luckily the rain turned into snow, and unluckily snow turned into walking in the cloud. As a large amount of fresh snow had fallen in the previous night, I made much slower progress than I anticipated. Large snowdrifts meant that breaking trail was at times a bit demanding with the rucksack full of camping, photography and winter gear, but I also had to take care to avoid potentially boggy areas as I didn’t want to sink through the snow only to find my feet submerged in a rather chilly stream. The lack of decent visibility and any signs of a trail or human presence was a great opportunity to test of my navigation skills were still up to scratch. Soon before I reached the summit (and visibility was still suboptimal despite sunset getting awfully close) I found a reasonably flat patch which wasn’t covered in meters of snow, and I decided to pitch the tent. Safety trumps photography I suppose. Luckily I had no trouble getting the pegs into the scoured snow and frozen ground, so everything was set up within the blink of an eye.

And as if by magic, the clouds were kind enough to lift while pitching the tent, just as I had (almost) accepted that this would be one of those trips. The summit was still disappointingly far away, though progress was a lot easier now with a substantially lighter rucksack, and eventually a grand vista opened up. The sky looked very dramatic, menacing almost, courtesy of the retreating snow clouds I presume. I guess I could say bye-bye to any aspirations of subtlety I may have had! 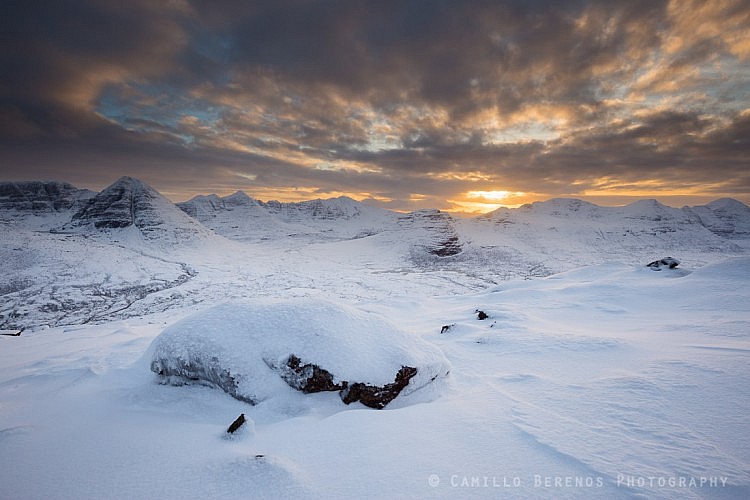 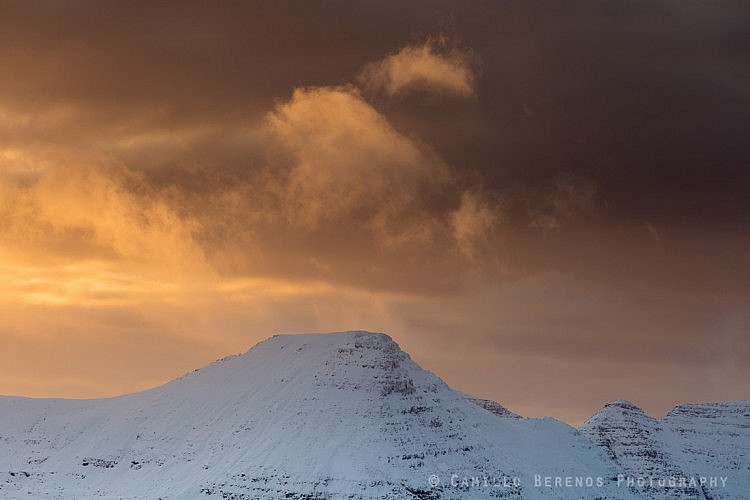 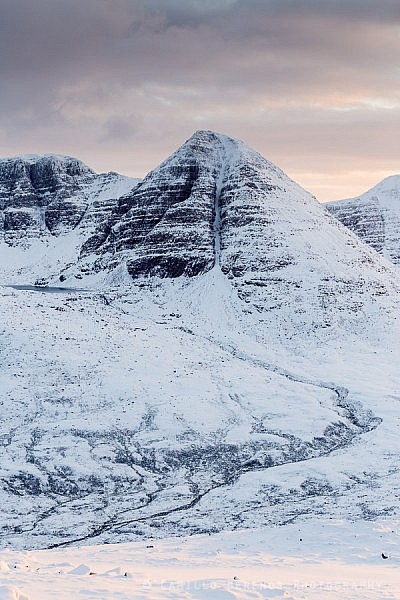 A burn flowing out of Loch Coire Mhic Fhearchair  with the Triple Buttress and Sail Mhor above. 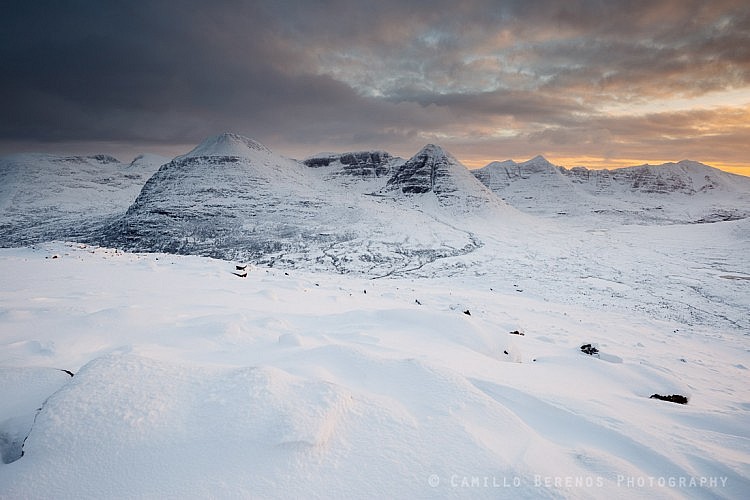 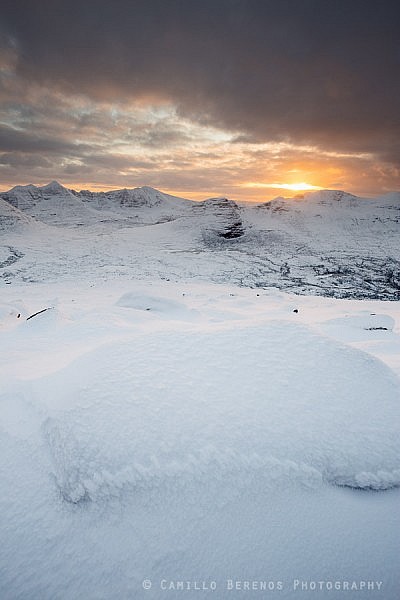 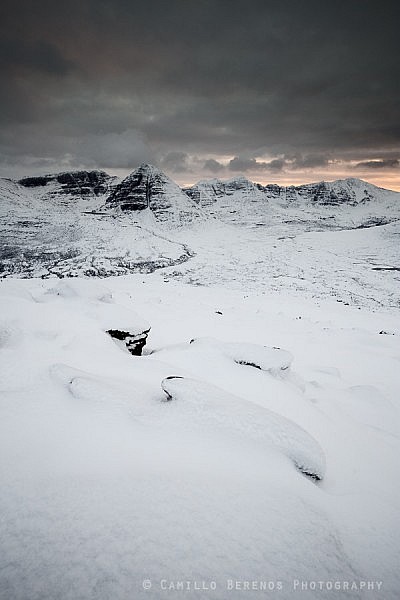 While there was still some decent light, I decided to head back to the tent before darkness arrived (it was still a 10-15 minute walk after all) and take some photographs of the tent and location. It’s not something I often do (I am often too tired, or get back to the tent in the pitch black), but people seem to love such shots, so here you go! 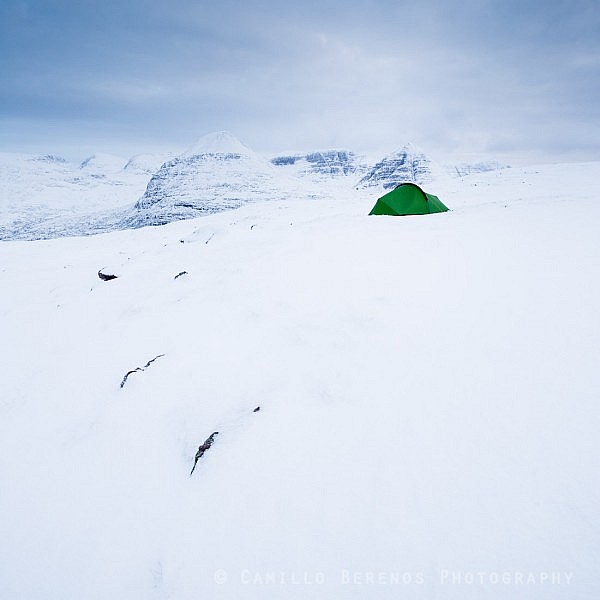 It turned out that the long night I had been so afraid of, was much more tolerable than I had imagined. I had plenty of time to cook (yes, I brought a stove this time, the MSR Windburner which was also a new purchase as I found the MSR Whisperlite a bit bulky for solo travel), look at the stars or just listen to music. Oh, and sleep of course. Despite temperatures hovering around -7/-8 and leaving the tent door open, I was kept warm all night by my sleeping bag and mat and slept better than on many summer camps. Other worries, such as frozen boots and trousers turned out to be an easily solved problem.

My alarm wet off way before sunrise, which have me plenty of time to cook breakfast, make some coffee and gather some courage to get dressed and out of the tent. It looked very overcast, but, from inside of the tent, I could see a promising band of colour at the distant horizon, and soon I was ready to rock and roll. 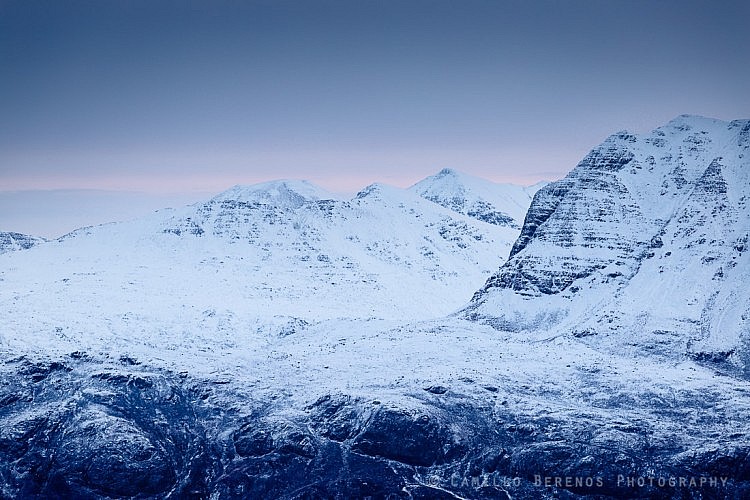 Slioch and the hills in the Fisherfield Forest at early dawn. 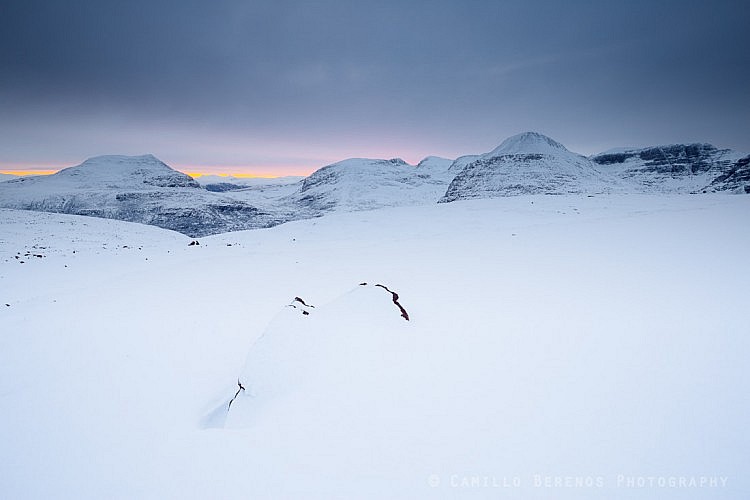 A lone boulder piercing through a thick blanket of snow. 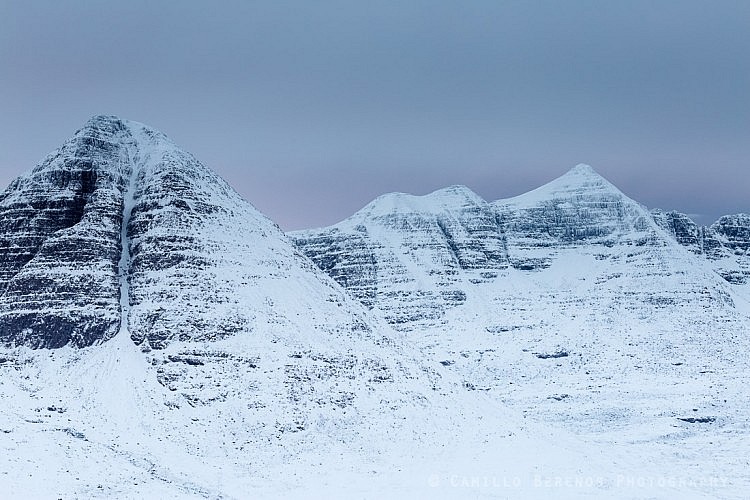 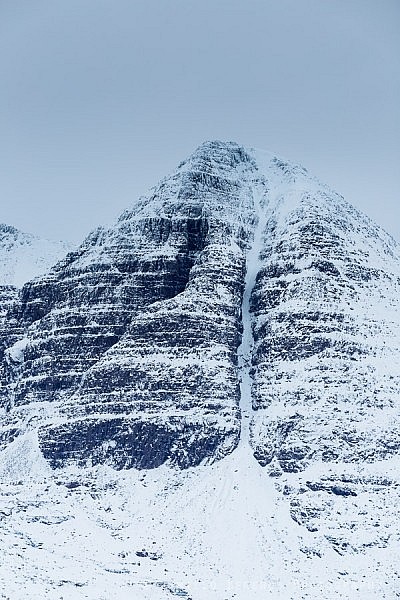 Unfortunately all good things come to an end, and so did the light and thus my photographic exercise. To get back to the car I simply retraced my footsteps (which may not ave been the shortest possible route) until I reached the stalkers’ path in the glen, from where it was a 2km stroll back.

All in all, this was a pretty enjoyable introduction to winter summit camping. I no longer feel that I can use  my gear as an excuse, and the long night was actually quite nice! With some luck I don’t have to wait too long until the next winter camp!

All photographs in this post can be purchased here or by contacting me.