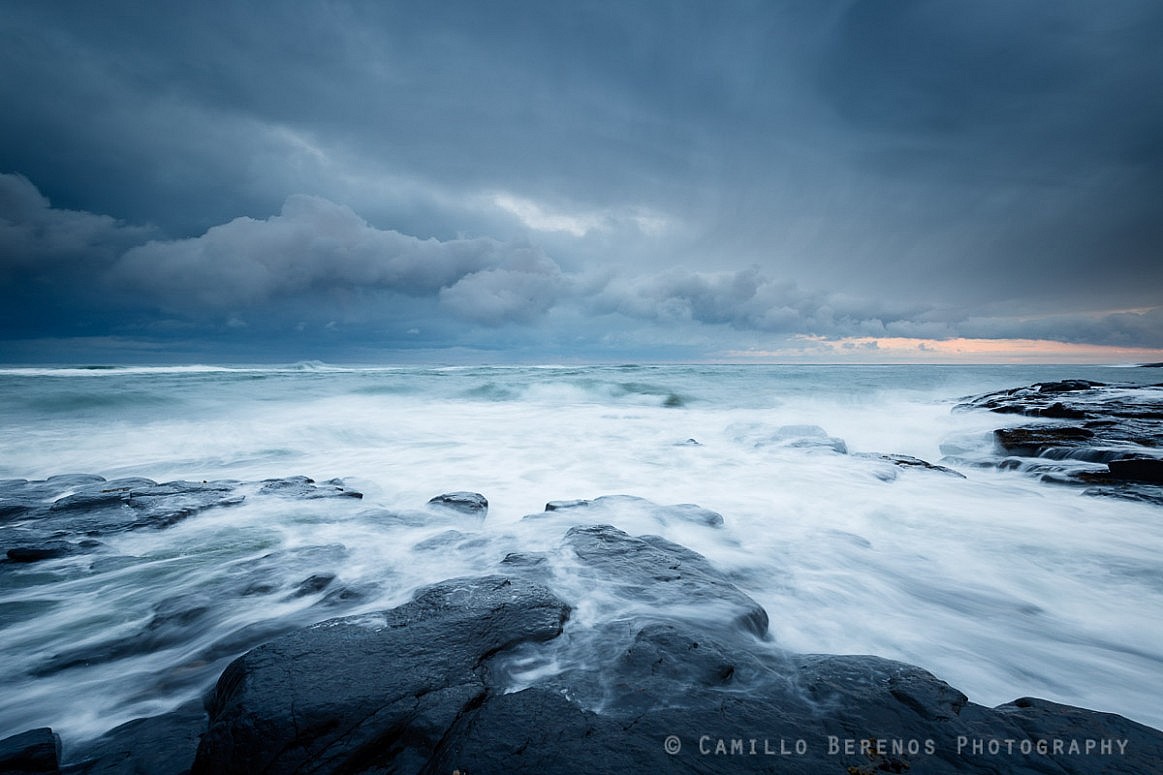 I have an almost life-long close connection with the sea in specific and anything aquatic in general. So much that I wanted to become a marine biologist for most of my childhood (I failed this ambition, though I did study biology), and was an aspiring competitive swimmer during my teens. As such, I felt extremely lucky when I had the opportunity to move to Edinburgh from landlocked Switzerland, where I had lived the previous four years. Indeed, being so close to the coast revived my enthusiasm for landscape photography, and for a little while I probably overdosed on seascapes. However, as time went on, my enthusiasm for seascapes dwindled and due to increased time constraints as a result of a growing family, I’ve chosen to spend most of my me-time allowance in the hills.

Recently, we spent a week on the fabulous Northumberland coast with the family. We had a great time, as it has so much on offer for little ones (I have visited more castles in a week than in the rest of my life before that) and older ones alike.  But being somewhere completely new to me, and somewhere which is famous for its beautiful coastline, I decided to squeeze in a few outings to the coast. The great thing about this time of year, is that both sunrise and sunset times make it possible to pursue photography, while at the same time making sure not to miss out on any time with the kids. The not so great thing is that it often meant setting the alarm shortly after 4AM, which is especially brutal if you have a teething baby 🙂 But I think I have become immune to sleep deprivation (or I am in denial about it), and unfortunately  the perennial battle with the alarm clock is something that is part of the landscape photography game.

I’m almost ashamed to admit that in terms of locations, I have gone for the low hanging fruits as I photographed iconic places such as St Mary’s lighthouse, Dunstanburgh castle and Bamburgh castle, but then again, I’m eternally grateful for every minute spent with my camera as photography wasn’t why I was there anyway. Even though I wasn’t able to get off the beaten track too much, I think that my best shots were taken on a stretch of coast between Howick and Craster. Not only because it is a lovely rugged bit of Northumberland coast (which it is: it’s one of those places where you can walk for miles and see compositions every couple of steps), but I was also really lucky with the dramatic conditions there.

So, below are a few photographs taken on this trip.

First stop was Collywell Bay at Seaton Sluice. There’s a beautiful shingle beach down there, and a lovely sea stack named Charlie’s Garden. Dawn was rather nice, and the waves were huge, which is always great for that dramatic effect of blurring the backwash.  I did wish my wellies were (a lot) taller though!

I decided that there was still time to head down to photograph St Mary’s lighthouse at Whitley Bay, (which was just around the corner) and still be back at the cottage before the kids woke up (I was wrong, I was five minutes late!).  As I was pressed for time I didn’t explore too many compositional options, but I mostly focused on the submerged causeway leading to St Mary’s island. It is a great setting indeed, and I can totally see why it is so popular with photographers.

The second outing was to Howick. I had no idea where to go or what to photograph, so I wandered aimlessly along the coast and photographed as I walked along. It is a stunning bit of coast, but the trip ended prematurely as the weather turned and I found myself in the middle of a pretty severe hail and thunder storm.

A third trip was to Embleton Bay. This is the location where that iconic Dunstanburgh castle shot is taken from. There are some beautiful black boulders on the beach, also known as death rocks. And indeed, I can attest that they more than deserve that name. I only slipped once, and no serious damage was done, but they are probably the slippiest rocks I’ve seen in my life. It certainly made last minute dashes to get away from big waves a bit more interesting than strictly called for.. It is a lovely beach, and the boulders alone provide more than enough material for interesting shots. Nevertheless, I still tried to get “that” Dunstanburgh castle shot, but I don’t think it worked very well as I had to shoot from a greater distance than I hoped due to an overabundance of sea foam on the shores closer up. The result is that the castle is a bit small so the image lacks a bit of impact, but I hope that the boulders and blurred backwash make up for that…

The coast between Craster and Howick was my destination for my next little evening outing. I arrived at the coast half an hour before sunset, and just as the rain, which had been going on all afternoon, finally ceased. It was a gamble, and almost didn’t go out, but after checking the rainfall radars I thought it might be worth a shot. And indeed, the sky was ominous, and the rain clouds above the North Sea were some of the most imposing I’ve ever seen (at least when having a camera with me). I fired off a few quick insurance shots, as I noticed the drama was on its way out. As such I didn’t spend too much time finding a great foreground, but I shouldn’t complain. After bagging a few insurance shots, I had a nice walk along the coast. There were so many great rocky (and very very slippy!) features to play with, and I had jolly good fun playing with shutter speeds to get the right amount of blur in the backwash, until it got so dark that exposure times turned the big waves into uninspiring milk.

On the last morning I made myself choose between Howick/Craster (again!), the dunes south of Bamburgh castle or “that” Bamburgh castle shot. For some inexplicable reason I went for the third option. I should probably have done something with the knowledge that it was a) a popular location, b) a Saturday and c) a bank Holiday weekend. I however, ladies and gentlemen, did not. I always aim to arrive very early, and indeed, I arrived at the beach long before sunrise, and I was delighted that there wasn’t a single soul to be seen anywhere -yes, I check carefully, as I’m not the kind of person who wants to deliberately stand in the way of other photographers who arrived before me. The sky was a bit too clear perhaps, but there was a moon above Bamburgh castle, the light was soft, and I tried to make the most of the conditions. After a while, one other photographer showed up. And slowly, more and more arrived. So far, so good -I think that in the end there must have been close to 20 of us, which in itself was quite a change from the solitude I usually seek (and find) on mountain tops, but it was great to see so many folk getting out with their cameras. Though at some point one photographer arrived who decided that the best place to set up was roughly 150 meters in front of us, making sure he was in pretty much every shot featuring the castle, and for the entire duration of that session, he showed no signs of going anywhere else. I suppose it’s a free world, and at popular locations it is unavoidable that at some point either you step in another photographer’s frame, or someone else steps into yours, but I think that there’s a big difference between stepping and standing. Ah well, it was a good chance to work on my cloning skills in Photoshop 🙂 All in all, it was a lovely spot, conditions were good to us, and I got some shots I’m reasonably happy with, although I expect that it’s unlikely that any will win prizes for originality..

Northumberland truly is a great place for seascape photography, and this trip has showed me how much fun seascapes can be. There’s certainly a lot less physical effort required than for the more hilly stuff I’ve mainly been shooting over the last year or so. I don’t think I’ll be sacrificing any hill time to throw in more seascapes in the near future, but it’s nice to shoot something completely new from time to time, especially if there are so many spectacular locations within close distance of one another to choose from!

If you’d like to see more of my recent work, please click here, and more photographs of Northumberland can be found here.

Some of my photographs can be purchased here or alternatively contact me here if you’d like to buy a photograph which isn’t included in the print shop.