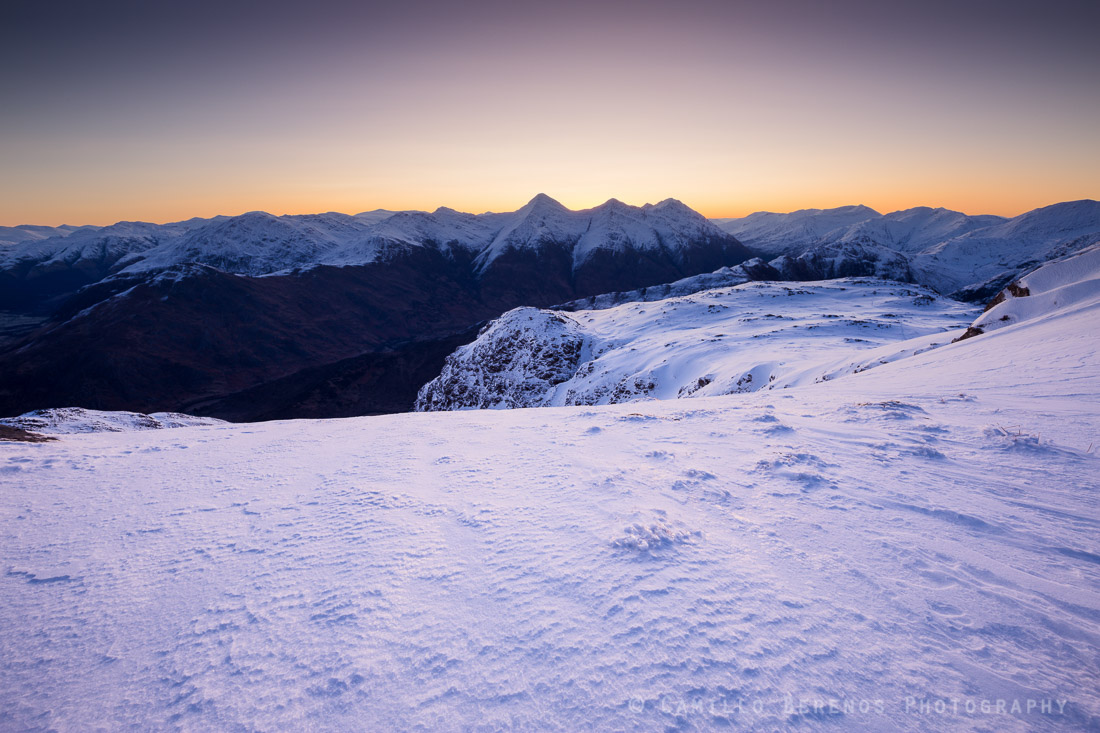 As many will be aware of, the weather hasn’t exactly been great this winter in Scotland and the rest of the UK. After the recent sublime experience summit camping in Torridon I was (too) keen on some more, which meant I recently decided to rely on the most positive weather forecast instead of the most negative one (which is the more sensible approach I assume) leading to me aborting my plans halfway up the hill. I was almost in the clouds (at 550 masl, with the summit being over 1000 masl) which didn’t look like they were ever going to go anywhere, and the wind was almost gale-force which meant standing upright was in itself quite a struggle. I didn’t look forward to spending most of the afternoon and night in my tent, in fear of being blown away with almost zero chance of taking some photographs, so I unwillingly returned back to the car and eventually home.

However, I had my mind set on returning to this area (Kintail), and I only needed a few weeks before nice weather coincided with the weekend. This time all weather forecast providers seemed to agree with one another: Good visibility from the tops and little wind (<20mph), which is all one could wish for. The forecast was so positive that I was a bit worried that the sky would be perfectly clear, which is by many landscape photographers considered highly undesirable. However, my worries were quickly put aside, as any opportunity to spend a day (and a night) in the hills should be accepted with open arms, especially if one doesn’t have to fear for one’s life in strong winds.

Kintail is probably experienced by many only on their drive to the Isle of Skye, but its steep and rugged ridges provide (almost) endless opportunities for hillwalkers and mountaineers. My last hikes in the region were done before I completely lost my mind (according to some) and decided to camp solo on summits and ridges, so this would be a great way to hopefully do more photographic justice to the region. For this trip I decided to tackle a lesser known hill on the South Shiel ridge which would be a nice circuit. Not as iconic as the Five Sisters of Kintail, or traversing the entire South Shiel ridge as those require better logistical or organisational skills to avoid walking back along the road, but hopefully a nice re-introduction to the region.

The first half of the walk was very pleasant due to a well-maintained stalkers’ path, even though extreme care was needed as the cold temperatures enabled the formation of extensive amounts of black ice. My water pouch bursted after I filled it up and dropped it on a stone.. I only had one Nalgene bottle, but 1 liter was by far not enough to last until the morning. After a bit of a panicky moment (or more disappointed-in-myself-moment) I realised that I had my stove, so I could just melt snow anyway.

Eventually the “safety” of a path was left behind and it was time to climb of the slopes towards the summit. Here I made the typical mistake of following (at least a few days old) foot prints instead of deciding on taking the shallowest gradient based on the map. I eventually found myself in a steep gully, with the terrain being a mix of wet turf, and very thin wet snow. The gradient wasn’t a problem for ordinary summer walking, and probably not even if there’d be a good covering of snow, but grip was abysmal, and this was only the start of the narrow chute! Below me I heard two ravens screech, and a golden eagle was circling not far above my head. I was convinced they were just waiting for a moment weakness! After checking the map again, it looked like only a short descent would be needed to traverse around some rocky outcrops, where shallower slopes should be found. And indeed, this was right! Not only was the gradient much more pleasant, this side of the hill was less affected by the sun, so the snow cover was far thicker, much of it even being powder.

At this point, being far above the snowline, the views were mesmerising! I was fascinated by the multitude of tracks and prints left behind by all sorts of animals. The red deer prints were not a surprise, as I saw numerous deer which were easily spotted amidst a sea of white. But there were also prints of mountain hares, ptarmigans, foxes and other smaller mammals. It is really incredible that such a diversity of wild creatures can be found in a such a harsh environment!

Anyway, I digress. The final and relatively broad ridge was now easily reached, and only a short walk to the summit lay ahead. The hard part was now finding a flat area with a relatively uniform covering of snow large enough to pitch my tent. This wasn’t very easy, as the terrain was extremely undulating, resulting in a checkered pattern of small patches of snowdrifts and frozen snow, but I found a great place which was almost flat and relatively sheltered from the strongest winds. Sunset wouldn’t arrive until some time later, which gave me some time to walk around, take in the sublime views (can one ever get bored of snowy mountains?) and scout vantage points for photographs later on. I tried hard not to trample all over the pristine snow cover as there’s nothing worse than having a nice wide-angle shot ruined by foot prints especially when they’re your own fault! It turns out I only ruined two photographs which is not bad I suppose, though there are no statistics for the number of amazing photographs I could have taken if my footprints weren’t all over the place.

As always, sunrise eventually happened. The clear skies felt a bit naked to my eye, as I prefer some moody dramatic cloudy skies, but the clear conditions would perhaps nicely complement the gloom from my previous winter hiking trip. The clear conditions certainly enabled some stellar long-distance visibility. The Isle of Rum, the Black Cuillin on the Isle of Skye, the Torridon hills, the hills in the region between Arnisdale and Glenelg, not to mention the mountains in Kintail and Glen Shiel: they were all prominently and clearly visible. The phrase “Wow” did go through my head a couple of times! Anyway, below are some photographs in chronological order. 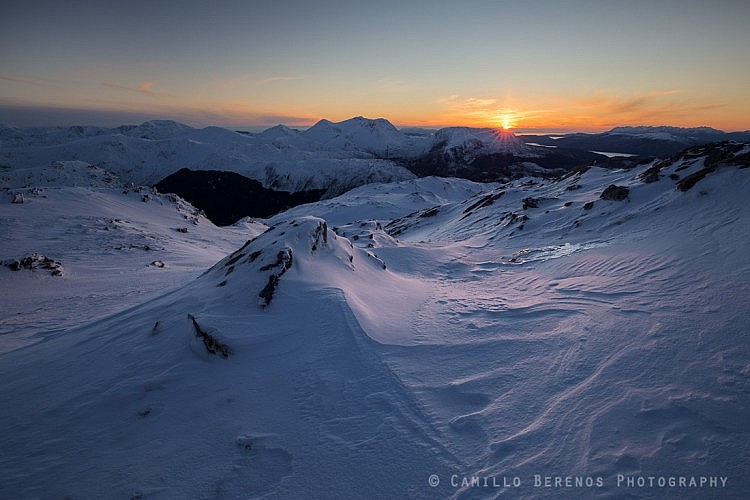 Sunset above the hills in between Arnisdale and Glenelg. The fabled Black Cuillin can be seen on the far right. The soft last light rendered the textures and patterns in the snowdrifts beautifully. 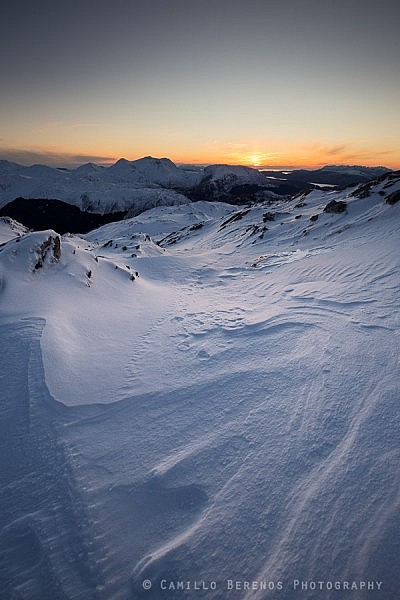 Deep shadows create foreground interest in the windsculpted snow as the sun sets behind the wintry Arnisdale hills. 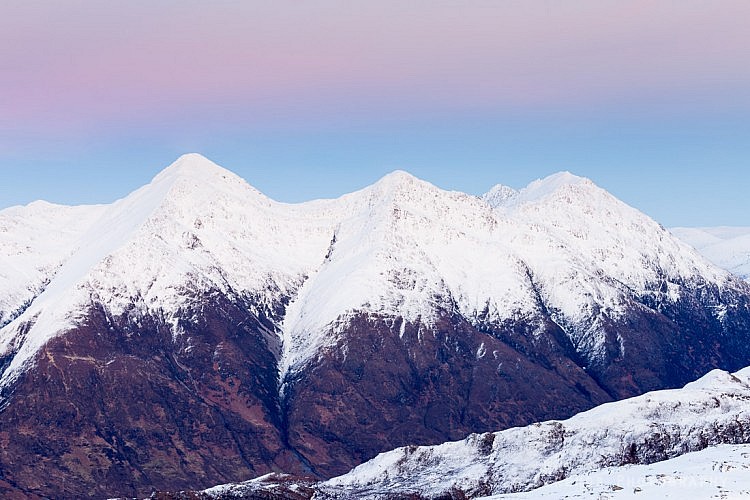 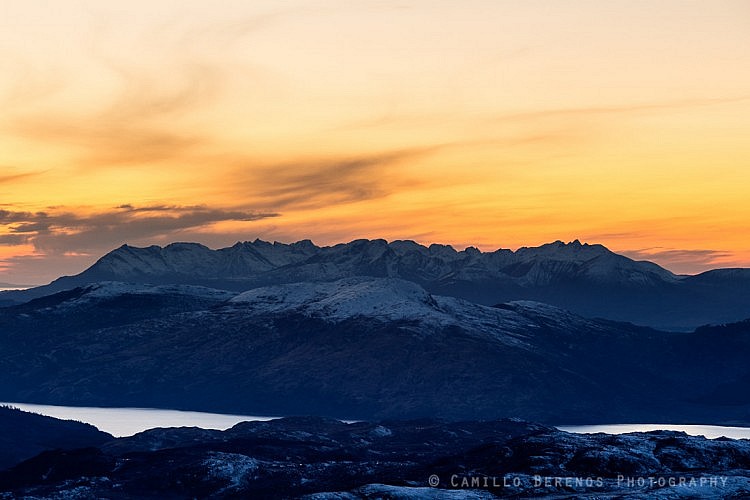 The Black Cuillin on the Isle of Skye at dusk 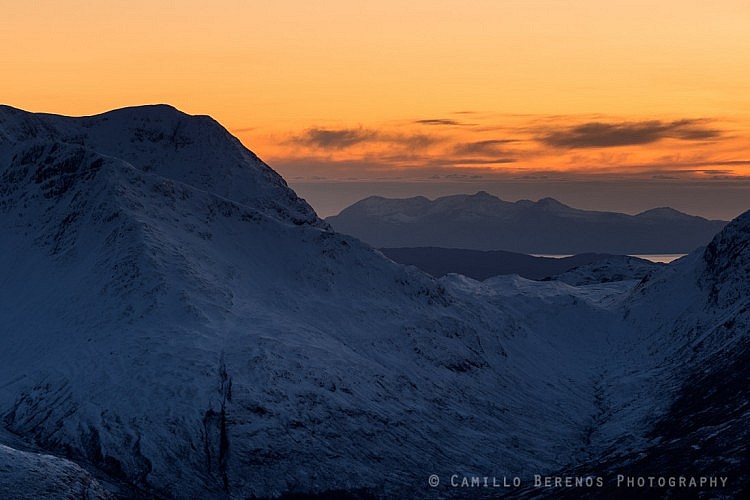 As light began to fade, it was time to refuel. I’m not the most imaginative chef when summit camping, but the cous cous tasted great and some freshly brewed tea instantly revitalised me enough to consider trying out some astrophotography. Inevitably this meant prolonged amounts of standing around doing nothing due to the long exposures, and it didn’t take too long before my feet were getting cold. It must have been almost -10 ºC, which isn’t too bad I guess, especially when moving, but I think my socks were a little damp as a result of the vigorous exercise earlier that day. I returned back to the tent which was great moment to try out my newly acquired Primaloft booties! A bit of a luxury item, but I was glad I’d taken them with me. 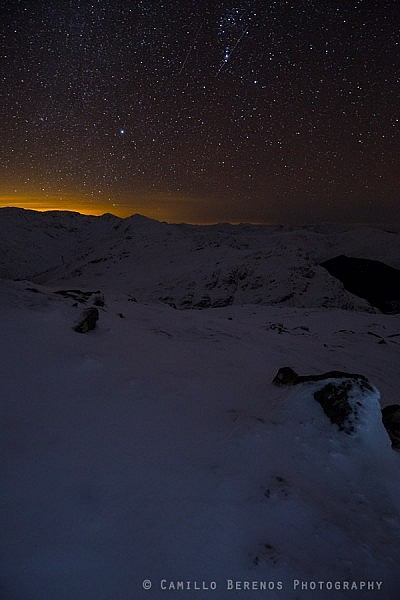 An Arnisdale winter landscape at night. I apparently captured two shooting stars too!

The calm conditions ensured that I had a decent night’s sleep, though there was a fair bit of condensation in the tent, even on the inner tent. This was no problem for my sleeping bag (as it is fairly water resistant) but a little bit uncomfortable nevertheless. I probably shouldn’t have closed the flysheet that night, though I suppose fighting off condensation in these calm and clear conditions is an uphill task. After making some breakfast (muesli with milk) and brewing some more tea, my gear and tent were all packed way before sunrise. The light was beautifully soft with pastel colours on one side of the hill, while on the other side a yellow/orange band hinted at the imminence of sunrise. Very dreamy ethereal light, and very different to twilight the night before. Most of the landscape was initially predominantly illuminated by the moon rather than directly by the sun which at that point was far below the horizon. 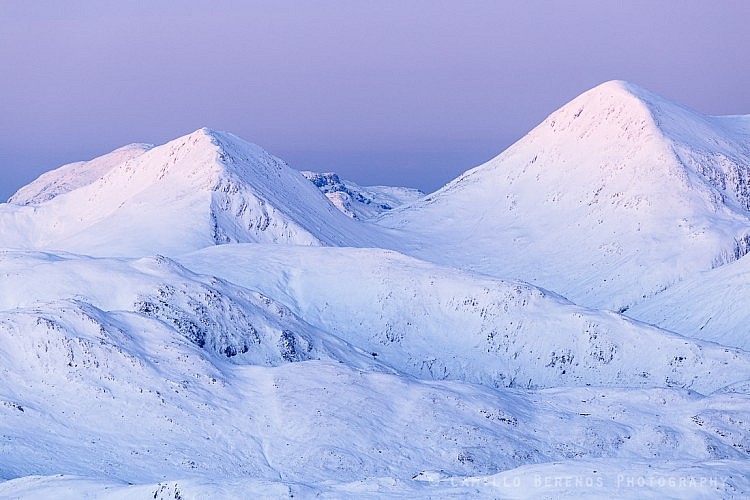 Part of Beinn Sgritheall at dawn 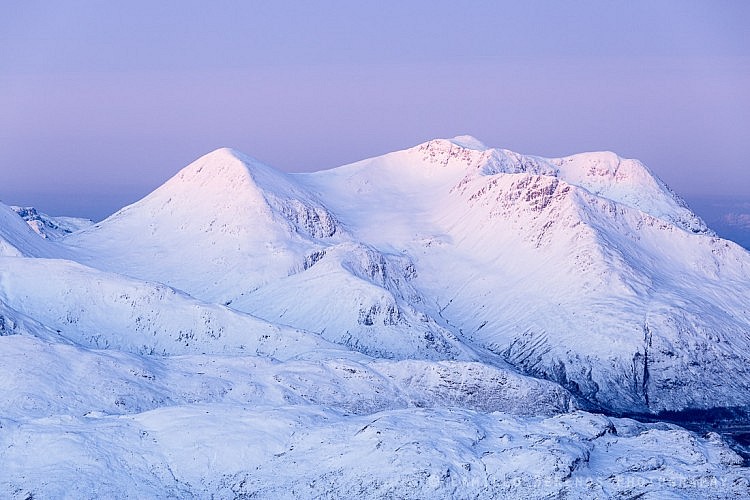 The snowy bulk of Beinn Sgritheall at dawn 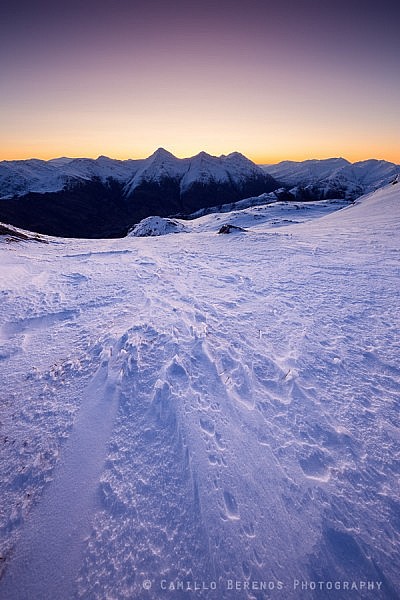 The Kintail ridge and part of the South Shiel ridge on a winter dawn. The partly scoured and frozen snow in the foreground certainly drew my attention! 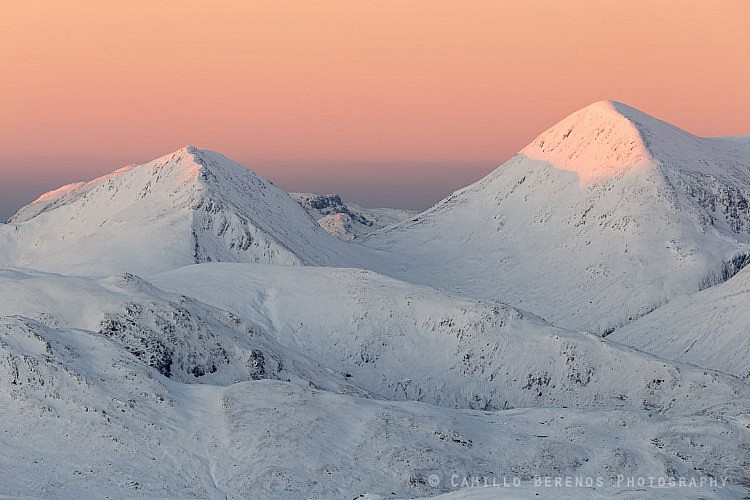 Alpenglow at sunrise on a snow-covered Beinn Sgritheall. I captured a very similar scene only minutes before, but the complete different light warranted plagiarising my composition! 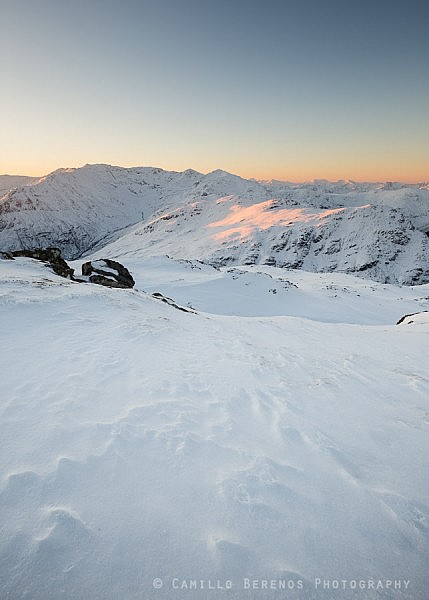 The rugged mountains on the South Shiel ridge (Kintail) at sunrise. The light was just soft enough to retain the wonderfully soft shadows in the foreground snow. 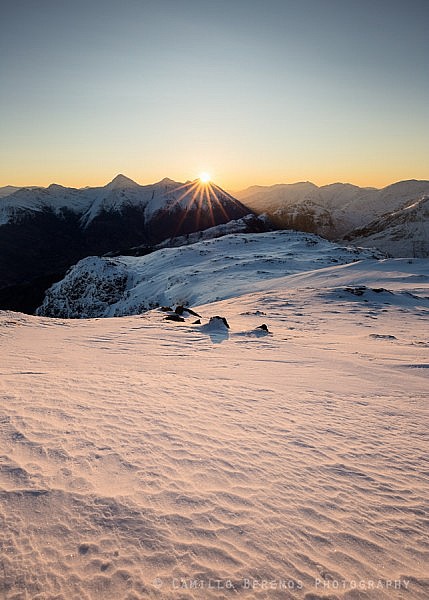 I’m starting to believe I have vampire ancestry, as sunrise was the cue for me to get going again. The return walk to the car went smoothly. I even used my crampons for a bit, as some of the snow had a hard crust. Thanks to the baltic conditions at night the stalkers’ path was even more treacherous than on the approach the day before. I sheepishly admit to having lost the battle with gravity a couple of times, but no serious harm done.

I can now look back on a great trip with truly fantastic conditions, and memories that will be always be with me. What it lacked in drama, I hope it more than made up for in dreaminess. I am a sucker for big dark cloudy skies with the occasional sunbeam, but the more faitytale-like conditions I experienced are hard to beat. If only for introducing some diversity into my portfolio. I heard rumours that photo after photo of mean ominous skies can get a bit repetitive. I might be a bit greedy, but at all times I’m keeping one eye on the weather forecast as I’m hoping for one last summit camping trip this winter!

If you’d like to see more of my recent work, please click here, and more photographs of Kintail can be found here.

Some of my photographs can be purchased here or alternatively contact me here if you’d like to buy a photograph which isn’t included in the print shop.